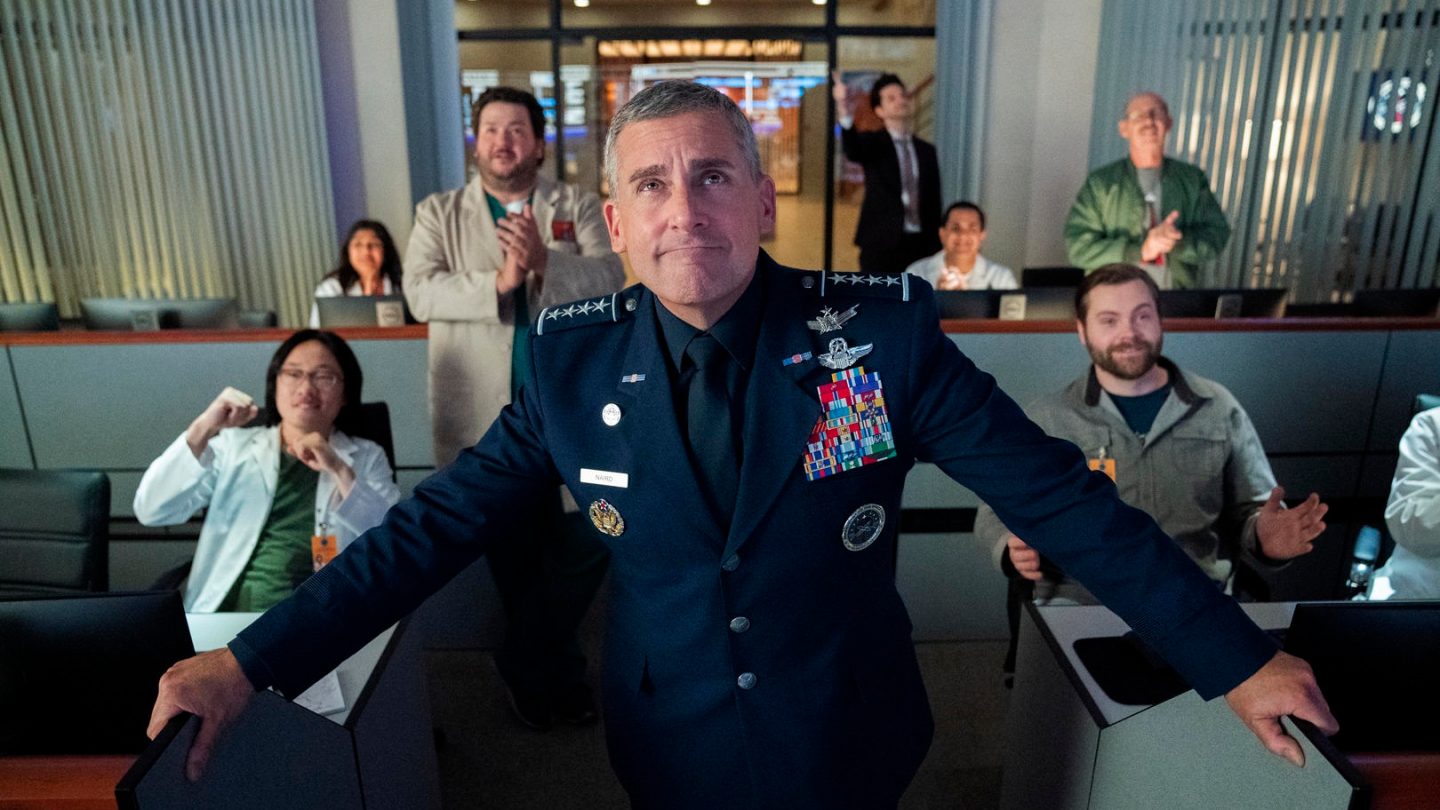 I have a theory about Greg Daniels’ approach to all the TV series he’s either created or had a hand in creating over the years, a theory that I came to believe even more strongly while watching episodes of his new Space Force series for Netflix that the streamer made available early for reviewers (ahead of its release on Friday).

Daniels, of course, has made a name for himself as a showrunner in charge of landmark TV comedies that have stuck to the tried-and-true half-hour format, which isn’t necessarily what you might regard as the provenance of great, enduring art, nor the kind of prestige TV that sends critics reeling. Somehow, though, shows like The Office and Parks and Recreation managed to pull off an admirable magic trick anyway — making millions of people care deeply about characters ranging from the bumbling manager of a paper supply company to an effervescent small-town government bureaucrat, all while hiding meaningful lessons about the human condition inside these otherwise frothy, lighthearted comedies.

It’s a feat that has led me to conclude the following: There is always more than meets the eye to Greg Daniels TV projects — and, indeed, that his approach to this particular form of popular culture is to use it to, in a manner of speaking, trick us into eating our vegetables.

What do I mean by that? No one wants to watch a screed about the boring lives of the civil servants who make sure that local parks are maintained, or a documentary about how the lives of office drones have changed over the years thanks to everything from corporate mismanagement to the increasing digitization of the world. But when you hide all that inside sweet, fictional stories with an abundance of humor and heart, the result is not only something that people are drawn to — in the process, you can even sneak in a moral or two. And that is very much the case with Space Force, Daniels’ fictionalized account of the Trump administration’s creation of a sixth branch of the US military.

TLDR, by the way: I enjoyed the Space Force screener episodes so much I watched the whole thing twice. To be fair, there was one thing that annoyed me — a major question mark about Lisa Kudrow’s character that’s left unaddressed for the whole season (to say anything more about it would count as a specific spoiler that Netflix has forbidden) but it didn’t take away from my overall feeling about the show.

Let’s now back up for some introduction. “This isn’t the real world, right?” Daniels explains in an interview with BGR, about how he came to be shepherding a TV show about the Space Force announcement that only just happened two years ago. “It’s, like, a parallel world. It’s a fictional, imaginative treatment of a Space Force that we’ve made up that’s occurring in a parallel universe here. We started with the announcement, the same as the actual Space Force, and then we’ve kind of just been designing our own version of it.”

Suffice it to say, if you were a fan of The Office and Parks and Recreation, you’ll find plenty to like here. The banter is similarly rapid-fire, the ensemble cast offers comic relief in abundance, and there are plenty of moments during which we get a satirical wink-and-nod at current events. When Gen. Mark Naird — the character played by Steve Carell, who’s tasked with building and leading the new Space Force — gets his promotion to head the command, which allows him to now sit in meetings with the Joint Chiefs, they rib him mercilessly as a kind of lesser among equals. Speaking of the Joint Chiefs, that’s where the creation of Space Force is announced to the assembled generals (“POTUS wants to make some changes. He’s tweeting about it in five minutes, so let’s hope you like it.”)

Fred Willard, who died earlier this month at age 86, played the elderly father of Carell’s character in the show, and he milks his age and frailty to full comic effect. One of Daniels’ favorite moments of shooting the season, in fact, involved working with Willard:

“He was such a comedy legend and a very lovely person,” Daniels said. “I had been on the set for his thing in the pilot that he did, and we invited him to improvise. He was 86 and pretty frail, but he launched into this brilliant improvisation for four minutes, and everybody in the crew was biting their lips to not laugh during that. Afterward, everybody put down their equipment and gave him an ovation, which I’d never seen before on a set. He was absolutely brilliant, even just a few months ago, working on the show.”

Carell adds some utterly perfect Carell-isms to his portrayal of the four-star general who bickers incessantly with the general in charge of the Air Force (played by The Americans’ Noah Emmerich). Naird sings to himself when he’s stressed out, for example. And he’s such a military man through-and-through that when he wakes up at night to use the bathroom, he does a perfect ramrod-straight spin on his heels to return back to bed.

I interviewed Rainn Wilson several years ago, and one of the things I remember most from our conversation is him explaining to me that he thinks the reason we all loved his portrayal of Dwight Schrute in The Office is that Dwight wasn’t merely a by-the-books sycophant to Michael Scott. It was also a byproduct of all the tiny details that got added to the character of Dwight bit by bit, everything from the fact that he was obsessed with weapons and martial arts, ran a beet farm, had a bearded cousin named Mose, plus tons of other little idiosyncrasies like those. Carell, in other words, does something similar with his character in Space Force.

Back to our point at the beginning, though. Yes, this is a comedy meant to entertain and indulge you for a half-hour. But there are also moments here and there in the season that help the show rise above this being a mere comedy satirizing the Trump administration announcement that made us all collectively scratch our heads when we first heard about whatever this Space Force thing was supposed to be.

One such moment involves a monologue that Carell’s character delivers during a congressional budget hearing — in which one of his inquisitors is a ringer for New York congresswoman Alexandria Ocasio-Cortez — who rips into him about the price of the oranges that are being sent up to astronauts to eat. I won’t spoil it, but it sets up a nice speech from Carell’s character about why we should all care about things that affect the greater good, even when they don’t impact us directly. (During this encounter, we also get one of my favorite jokes during the show, when another congresswoman who’s dubious about the purpose of Space Force asks Carell’s general, “Why are you here?” Without missing a beat, he deadpans that it’s because the Yankees won the ’61 World Series and his parents got a little carried away with the celebration. Classic.)

Daniels, meanwhile, told me another of his favorite moments in the season comes towards the end, and it’s another speech from Gen. Naird that goes back to what I was saying earlier, about these Daniels TV shows always sneaking in a little something more — in this case, a particular rumination from Carell’s character:

“The generation that won World War II was exposed to so much awful reality that they made mostly good decisions for a long time after,” Gen. Naird tells his Space Force staff at one point. “Forget history, and you are doomed to repeat the mistakes of the past. Forget how bad polio was, people stop taking vaccines. Forget how bad world wars are, people start puffing out their chests … The real enemy is arrogance.”

This might help explain why watch parties for Space Force are reportedly being quietly organized within the Pentagon. And that kind of sentiment also speaks to why Daniels wanted to take this project on in the first place.

“On the first blush, right, it seems a little humorous. Like it’s Star Wars,” he told BGR about the idea of a space command. “When you do some research, you realize there’s been a space command for a long time in the Air Force. And then as we visited places like SpaceX that were putting a lot of satellites in orbit, they were talking about the need for some kind of protection from other countries that might want to take out the internet or GPS or various things we’ve come to rely on.

“So it does seem more sensible, the more you research it. I do think that it’s still a bit of a shame we are now in this time of, like, people trying to get to space for nationalistic purposes. To mine it or have soldiers on the moon. It felt like in the ’60s, when Neil Armstrong stood on the moon, he said it was a giant leap for all mankind. It seemed like it was more inspirational at that time. But it’s still kind of exciting to do something this audacious.”

That’s why, Daniels continued, the show is a comedy — “but it’s a character comedy. And it’s not mean-spirited. It’s trying to, like, do justice to the optimism of trying to get there.”

Audiences might find it a bit surreal to have a TV show about this new branch of the military unfolding at the same time the real thing is still being pieced together. Indeed, the Netflix series got the drop on the real-world Space Force when the former released its first official trailer before the new branch released its first official commercial inviting recruits:

“Steve (Carell) and I thought a lot before we started writing, and we talked about how this character was going to embody a lot of real positive traits that we felt the military had, but also have this other character played by John Malkovich who’d embody a lot of positive traits of scientists,” Daniels explains. “And then they also have their flaws and their foibles. But in general, the attitude toward the comedy is a laugh-with attitude, not a laugh-at attitude.”

From the intra-military rivalries fueled by Space Force, to Naird’s constant rallying cry of “Boots on the moon!” and the ongoing quest by his underlings for their mission to be seen as worthy of respect (“Air Force has airmen, Space Force has spacemen … nothing embarrassing or comical about it,” Naird has to reassure a captain under him at one point) this is a breezy, easy-to-binge Netflix comedy definitely deserving of a spot on your quarantine binge list — and which also happens to have an inspirational message, to boot.

Space Force debuts on Netflix on Friday, May 29.