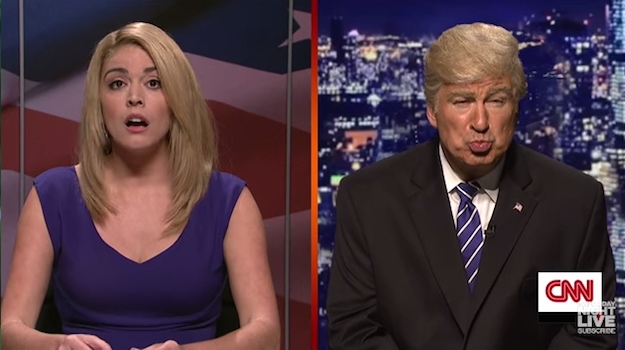 Successfully poking fun at the ongoing insanity that is the U.S. Presidential election, Saturday Night Live was back at it this weekend as they delivered a great spoof of last week’s Vice Presidential debate between Tim Kaine and Mike Pence.

When he dares anyone to show him evidence to the contrary, the broadcast is interrupted by a Breaking News alert that immediately shifts the focus to Trump’s lewd and offensive comments which were brought to light this past Friday.

Reprising his role as Trump, Alec Baldwin was in rare form yet again as he pulled off a brilliant impression of Trump attempting to defend his comments.

“Are you not entertained?” Trump began.

And riffing on Trump’s penchant for mispronouncing words, if not make up new words entirely, Baldwin as Trump comically said that he wanted to take a moment to “formally apple-agize” to all the people who were offended by his statements.

The entire cold open is well worth watching in its entirety and can be seen below.

One particularly funny moment worth highlighting comes when Trump, at about the 3:28 minute mark, defends his actions thusly: “Come on, Brooke. I was trying to look cool. I mean, what normal red-blooded American doesn’t want to impress the Billy Bush. Also, p.s., you have to admit it’s kind of funny that the only Bush who matters in this general election is Billy.”

Lastly, if you happened to miss last week’s episode of SNL, you can catch a great spoof of Trump and Hillary Clinton’s first debate below.