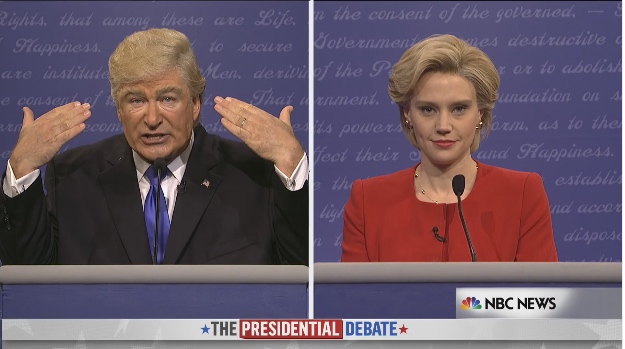 The  42nd season of Saturday Night Live kicked off with a bang this weekend as the famed sketch show wasted absolutely no time diving into the political absurdity that was last week’s Presidential debate between Donald Trump and Hillary Clinton.

With Michael Che assuming the role of Lester Holt, Kate McKinnon reprising her role as Hillary Clinton and Alec Baldwin pulling off an impressively accurate version of Donald Trump, the laughs were in heavy supply during the show’s cold open.

Funny thing is, because the real debate was teeming with ridiculous moments, the SNL sketch didn’t really need to spoof the debate as much as it simply needed to recreate it.

SNL sketches are often hit or miss, and the political ones in particular always run the risk of running on the boring side. This week’s cold open, however, was on fire from start to finish. Checking in at just under 10 minutes, the sketch managed to hilariously skewer some of the more ridiculous aspects from the debate, including Trump referencing Rosie O’Donnel, Trump’s near-obsession with referencing Sean Hannity, Clinton proudly trotting out her “trumped up trickle down economics” line, Trump boasting about his temperament and Clinton referencing her father.

To the latter point, McKinnon hilariously explained that Trump’s policies would have an adverse impact on “laborers like my own human father, who made, I guess, drapes, or printed drapes or sold drapes, something with drapes… he was relatable and I am also relatable.”

More than anything, Alec Baldwin deserves props for absolutely nailing Donald Trump’s mannerisms, tone and inflections. Even better, the powers that be at SNL have said that he’ll be reprising his Trump role again as we steadily approach election day.