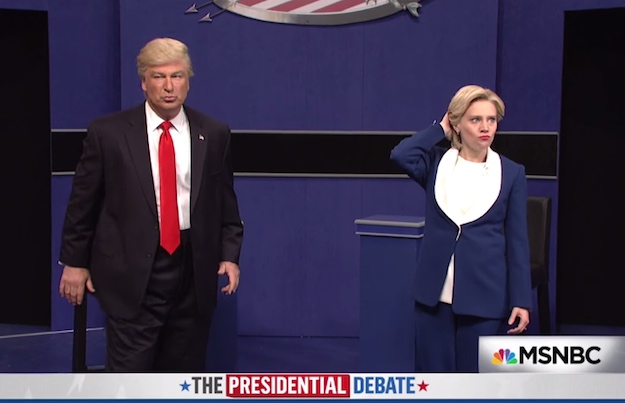 Saturday Night Live over the weekend continued its comedic assault on the 2016 U.S. Presidential election with a hilarious and dead-on spoof of Donald Trump and Hillary Clinton’s recent Town Hall debate. Per usual, Alec Baldwin was in rare form as Donald Trump as Kate McKinnon similarly reprised her solid Hillary Clinton impersonation.

As anyone who witnessed last week’s Town Hall debate can attest, it was nothing short of a trainwreck, albeit an entertaining one, that practically did nothing to illuminate the respective candidate’s positions on important issues. Instead, we were treated to child-like bickering and a smattering of colorful and meme-friendly town characters like Ken Bone.

DON’T MISS: One of the most popular Pokemon Go map trackers is being revived this weekend

With so much material to work off of, SNL had no trouble delivering the laughs while skewering the ridiculousness of this year’s election. Neither candidate was spared ridicule in this week’s clip as Clinton was portrayed as an automaton pathetically striving to bond with the common man while Trump was portrayed as a bumbling buffoon incapable of staying on any given topic.

When confronted with a question about kids for example, Trump responds: Anderson, I love the kids. Okay, I love them so much I marry them. I’ve been helping kids my whole life. In 1992 I helped a kid named Kevin McCallister find a hotel lobby. You might remember the documentary, Home Alone 2: Lost in New York.”

At the 4:30 mark, there’s also a great scene where Trump creeps up behind Clinton, mirroring one of the more bizarre moments from last week’s debate. And last but not least, what debate spoof would be complete without an appearance from the man, the myth, the legend. Of course, I’m talking about Ken Bone, the red-sweatered undecided voter who arguably became famous faster than anyone else in history.

Interestingly enough, the Ken Bone segment was the only weak part of the entire sketch. Overall though, SNL’s cold open this week was an A+ effort and well worth watching. That is, of course, assuming that your name isn’t Donald J. Trump.

Up at the crack of dawn, Trump took to Twitter to blast the show and Alec Baldwin’s Trump impersonation.