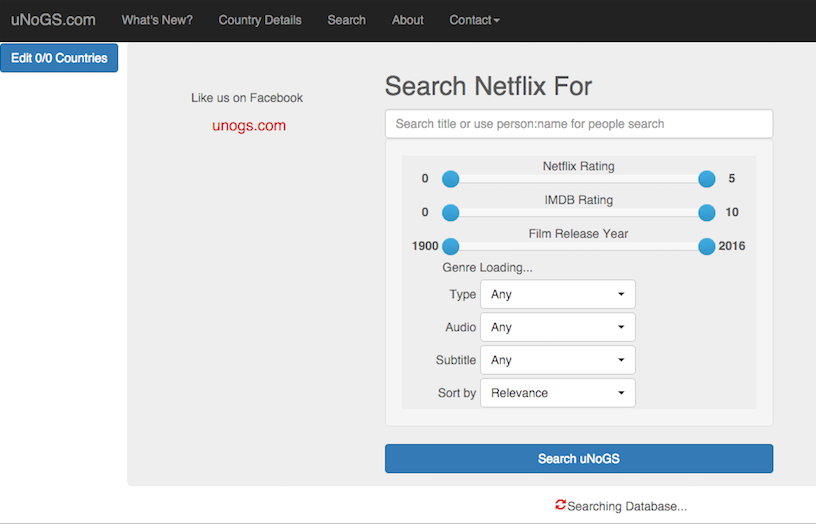 The average Netflix user in the United States isn’t missing much when they log on to their accounts to find the latest movies and shows. Sure, there’s going to be some content that’s only available abroad, but our library is by far the largest available on the service. But if you don’t live in the U.S., you can finally see everything you’re missing out on with an unofficial database.

Over the weekend, TorrentFreak published a piece about the “unofficial Netflix online Global Search” (aka uNoGS), which lets users find content on Netflix from any country’s library. If a movie or TV show you were planning to watch has suddenly vanished from the service, just search for it on the database to see which library you’d need to access in order to watch it.

Of course, in order to do so, you’ll have to use a proxy or a VPN. Thankfully, uNoGS provides a drop-down list with every movie listing with a selection of proxies, VPNs and DNS providers that will allow you to watch the movie or show in question.

“uNoGS is very much a one man show juggled as a hobby between work and family life,” uNoGS operator Brian told TorrentFreak. “I initially built the site just for myself because the few sites that were providing a service like this were extremely limited in terms of search functionality.”

The fact that Netflix subscribers are having to resort to unofficial services like uNoGS and Smartflix in order to get the most out of their subscriptions is unfortunate, but as Brian notes, things will change once traditional outlets can no longer compete.

“At the moment these different providers have enough money to buy up the rights to a variety of shows making the geo-restrictions necessary,” said Brian. “In time, this will change as more and more viewers go to disruptive services which charge a fair monthly fee and allow users to watch titles on their own terms. With the moves that Netflix is currently making, hopefully these changes will come sooner rather than later.”