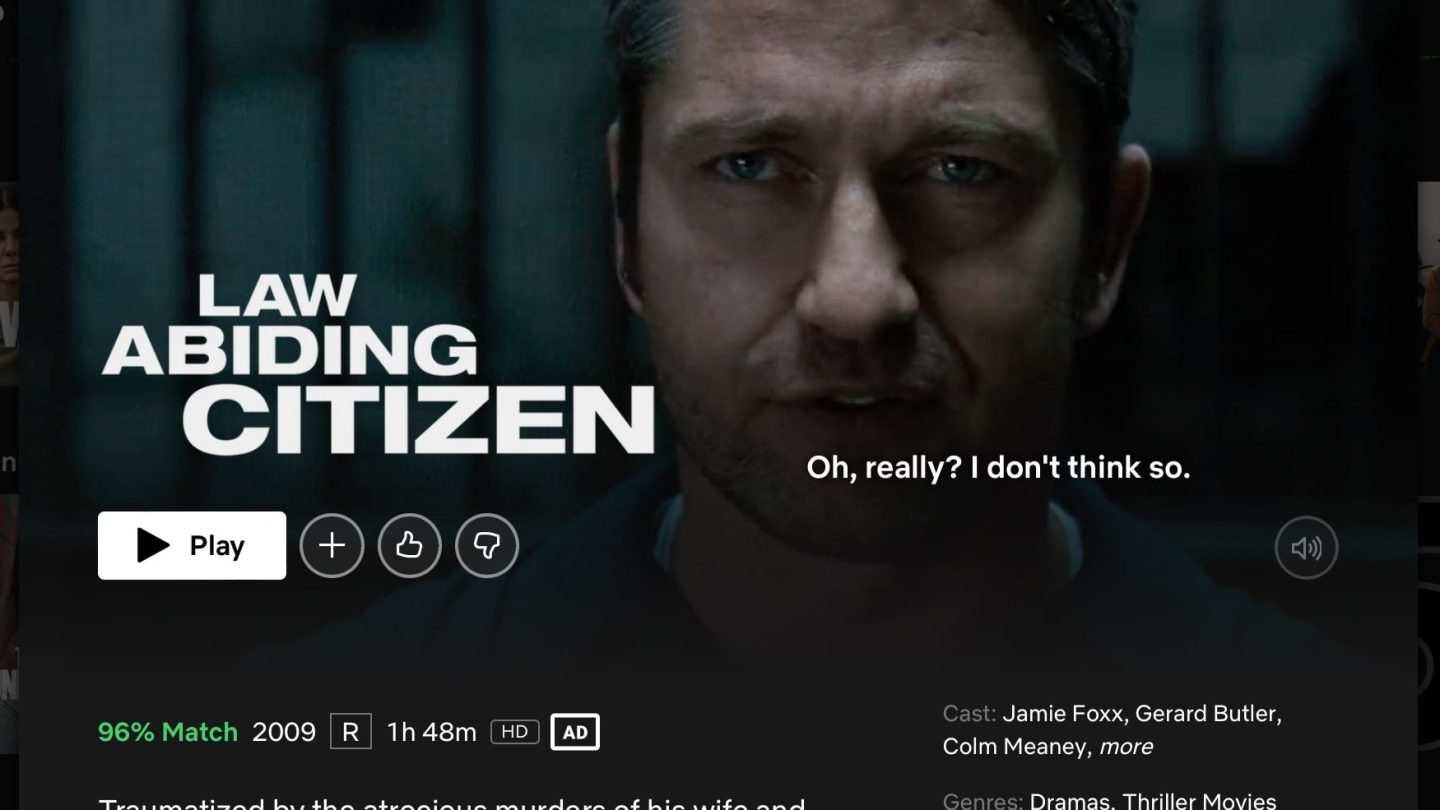 If you’ve checked out the list that Netflix maintains on a regular basis of the top movies on the streaming platform in the US, you’ve likely been greeted with some surprises. Buzzy new Netflix originals like The Unforgivable and Red Notice, for example, sit alongside forgotten theatrical releases from years ago, like 2009’s Law Abiding Citizen.

The latter was actually added to Netflix earlier this month. Which is probably why it pretty quickly shot up the Top 10 list — to near the top of the ranking. The movie, which stars Gerard Butler and Jamie Foxx, currently stands at #4 on the list, at least as of the time of this writing. And in case you missed this movie in theaters the first time around? We’ll tell you all about it below.

According to Netflix’s official summary, Law Abiding Citizen is about the following. “Traumatized by the atrocious murders of his wife and daughter, a grieving man gives in to his rage and sets out on a course of vengeance.”

This is another of those movies where audiences seem to have been thoroughly entertained by it — while critics, however, utterly ripped it to shreads. Over at Rotten Tomatoes? The movie has a pretty solid 75% audience score, based on more than 250,000 user ratings.

The critics’ assessment, though, is a completely different story. That score is an abysmal 26% on the review aggregation site. And it’s based on 162 reviews, like this one from The New York Times: Law Abiding Citizen is “about the cat-and-mouse game between two very smart guys, and it’s perfectly happy to be as dumb as it wants.” Bottom line: If you want a roughly two-hour dose of mindless entertainment that viewers have loved but critics think is trash?

Law Abiding Citizen might be the flick for you.

Netflix Top 10 movies in the US

When you’re done with this one, meanwhile, there’s plenty more on Netflix’s Top 10 list at the moment that’s worth checking out if you haven’t already.

The Netflix link that will take you straight to Law Abiding Citizen, which you’ll find ranked near the middle of the list below, is available here. Other films worth your time include the new release from Sandra Bullock. Which is actually dominating the streamer’s Top 10 list in the #1 spot at the moment.

THE UNFORGIVABLE, starring Sandra Bullock, is now on Netflix. pic.twitter.com/G7BcR9MDYK

Here’s how Netflix describes Bullock’s latest, The Unforgivable (which debuted on the streamer on Friday). “Released from prison after serving a sentence for a violent crime, Ruth Slater (Bullock) re-enters a society that refuses to forgive her past.

“Facing severe judgment from the place she once called home, her only hope for redemption is finding the estranged younger sister she was forced to leave behind.”

Without further ado, the rest of the streamer’s list of the current top movies is as follows: