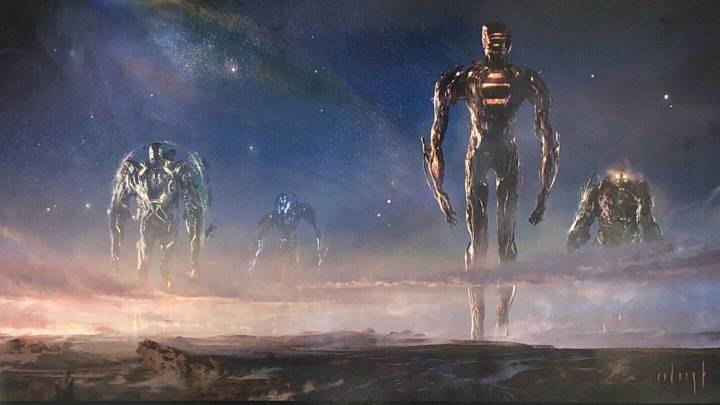 When Black Widow premieres in mid-July, two years will have passed since the last MCU movie that we saw in theaters — which was Spider-Man: Far From Home, the final title in the Infinity Saga. The pandemic forced Disney and Marvel to delay all of their MCU Phase 4 films, as the studios weren’t happy with the idea of launching the pictures on Disney+ and missing out on all that money at the box office. Black Widow is just one of the four new Marvel films scheduled for release in 2021, but from the looks of it, it’ll hardly be the most exciting of the bunch. Two other movies seem to be vying for that title: Spider-Man: No Way Home and Eternals.

Spider-Man 3 features the most popular Marvel superhero and might bring a significant storyline development to the MCU. Then, Eternals should be at least as exciting as No Way Home. The film will introduce us to a brand new team of superheroes that will join the Avengers in the MCU, and the movie has a fantastic ensemble cast. But the thing that will make Eternals stand out is the way it’s made. It might be an MCU adventure, but the film is a Chloé Zhao movie first and foremost. Now, a new report tells us the many ways Eternals will be unlike anything Marvel made to date. Mind you, some minor spoilers might follow below.

Marvel created this amazing universe of intertwined stories by trying things that other studios might have refused. Kevin Feige & Co. offered us all sorts of superhero stories, introducing heroes and teams that hardly had the same following as Spider-Man or DC Comics’ Batman and Superman. Yet audiences came to embrace and love these lesser-known superheroes as well as the overarching story that Marvel has been telling. Marvel is sticking with the same recipe for recent Disney+ shows. The studio also isn’t afraid to try new things, as we’ve already seen with WandaVision earlier this year.

Eternals falls into the same category of exciting Marvel experiments. It’s not just because Marvel is introducing a bunch of powerful new superheroes who will surely stick around for more Avengers adventures in the future. It’s because Chloé Zhao has been trusted with the film. That’s what a new feature on IMDbrief discusses.

Zhao won two Oscars earlier this year with Nomadland for Best Picture and Best Director. The report says the director split her time between directing Frances McDormand alongside a cast of mostly non-professional actors in Nomadland and preparing the production of Eternals.

“The overlapping productions of Nomadland and Eternals informed the styles of both films, with the former emboldening Zhao’s approach to take risks with the visuals on Eternals to create an MCU movie like no one has ever seen before,” the report says.

Zhao pushed to shoot the movie in remote real-world locations like the Canary Islands and different spots in England instead of relying too heavily on CGI. And Marvel execs agreed. Also, she used the same camera rigs from Nomadland to film Marvel’s new movie.

Gemma Chan, who played Kree warrior Minerva in Captain Marvel and was cast as Sersi for Eternals, is in the best position to explain the differences between most Marvel movies and Eternals. Captain Marvel relyed on much more studio work and blue screen than Zhao’s real-world locations and natural lighting in Eternals.

Zhao ended up in post-production for both Nomadland and Eternals, and she said we’ll understand how the two films relate to one another once Eternals footage is available. Disney is yet to release a full trailer, but we saw the first few scenes in a Marvel teaser a few days ago.

We’ve often wondered how Marvel will explain the Eternals’ passive approach to what had been happening on Earth since the first Avengers film, and the movie will surely explain it all. The IMDbrief report also offers us an interesting tidbit from Eternals when describing these powerful beings who inhabit the Earth. The film will tell us that the Eternals are part of two humanoid races that were in conflict for millennia, the Deviants and the Eternals. Thanos happens to be a third-generation Eternal from Titan, and “it is his misguided Infinity Stone quest to alleviate overpopulation by wiping out half of the Galaxy that convinces Earth’s Eternals to reunite in the upcoming film.”

Aside from Zhao’s different approach to making movies, there are a few other exciting novelties that will set Marvel’s Eternals apart from other MCU stories. The MCU’s first openly gay superhero Phastos (Brian Tyree Henry) and the first deaf hero Makkari (Lauren Ridloff) will both appear in the film. The feature explains that Ridloff is herself deaf, an authentic casting choice that has served Zhao well in her previous films, including Nomadland.

We’ll have to wait until November 5th to see how Zhao’s filmmaking style will influence this particular team of heroes. It’ll also have to capture the complex relationships between these powerful beings that might continue to influence the MCU going forward. It’s also worth noting that the film’s release date puts it on a clear path for Oscar considerations.

The full IMDbief feature is available at this link.