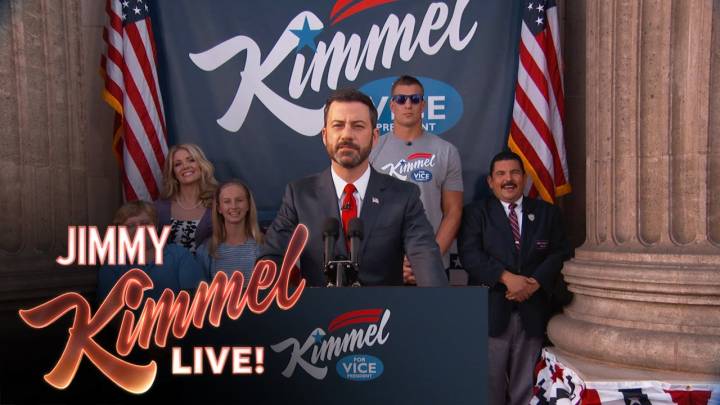 Over the past few years, late night talk show host Jimmy Kimmel has made a name for himself by pulling off some of the funniest and most impressively orchestrated pranks any of us have ever seen. Some of the pranks were so good that it took months before any of us found out he was responsible for them, but the latest goof from Jimmy Kimmel Live lacks the same degree of subtlety.

During the taping for Thursday night’s edition of his show, Jimmy Kimmel hopped on the double decker bus in Los Angeles, rode down Hollywood Boulevard and announced to the crowd gathered in front of his theater that he would be running for Vice President of the United States of America in 2016:

This, of course, is not how Vice Presidency works. The Presidential nominees have to choose their own VP candidates, but Kimmel genuinely believes he’d be a “good, solid #2.” And he’s apparently got Rob Gronkowski’s endorsement.

Unfortunately for Kimmel, it wasn’t all smooth sailing and cheering crowds. Shortly after the announcement, Kimmel’s monologue was interrupted by CNN anchors Jake Tapper, Dana Bash and Wolf Blitzer, who wanted to ask him a few questions concerning his recently announced candidacy:

Polling at 100% is a rather impressive feat, but as Blitzer points out, Kimmel is technically the only person actually running for the VP position. Nevertheless, Kimmel is confident that he has a chance to come out on top (even though he won’t be campaigning, because he gets car sick).