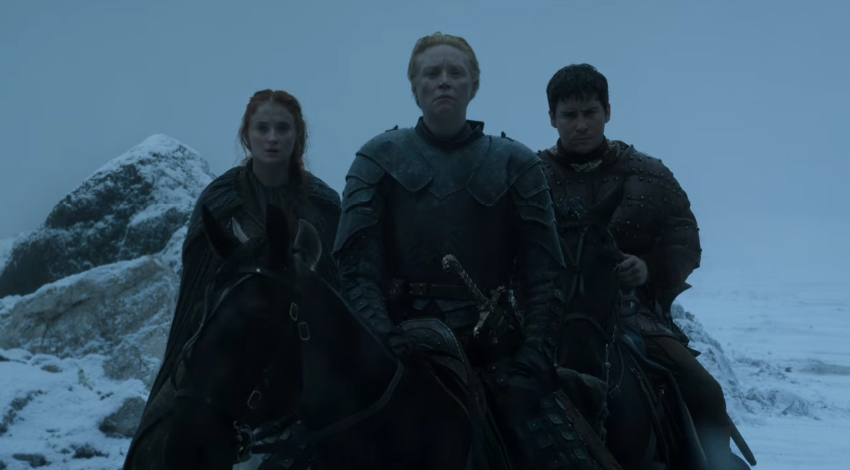 Jon Snow is a fearless leader and Ramsay Bolton is a fierce sociopath, but it’s not men who rule Westeros. At least not in episode four of Game of Thrones, that much is clear. In case you haven’t seen last night’s installment of HBO’s best TV show ever, then proceed at your own risk because major spoilers follow.

It doesn’t sink in immediately, but the more I think about The Book of the Stranger, the clearer it is to me that the fates of the Seven Kingdoms and Essos are in the hands of strong women. Episode four is an episode of various reunions, but it’s female characters that inspire and take the lead.

From the get-go, Melisandre tells Ser Davos that Jon Snow is the one to follow, not Stannis, and she’ll do whatever he commands – though we know how manipulative the priestess can be.

Brienne of Tarth was also very impressive during her brief appearances in this episode. Not only does she bring Sansa to the Night’s Watch to meet her brother – which is the first reunion of the episode – but she’s also quick to point out to Ser Davos and Melisandre that she’s the one who executed Stannis.

The events in the recent past have affected them deeply. Sansa is stronger than ever and she wants to take Winterfell back, convincing Jon Snow and the wildlings to help. She appears to be so determined that she and Brienne would probably go at it alone even without any assistance. Jon Snow, meanwhile, needs some convincing to go to war again, and it’s apparent that his death has changed him.

In King’s Landing, Margaery is the stronger of the two Tyrells, demanding that her brother find ways to cope with their incarceration. Cersei, meanwhile, makes a triumphant return to the Small Council, convincing Lady Olenna and Ser Kevan Lannister that the only way to go forward is to attack the High Sparrow before the Tyrell siblings are broken.

Theon reunites with his sister Yara, who shows us she’s fit to take the throne of the Iron Islands. And Theon is very sorry about his past actions — he’s also convinced that he’s supposed to help and support her claim to the throne.

Even Osha, the wildling who served to Ramsey, is in a commanding position in this episode. And for a second we think she might actually manage to kill Ramset.

Alas, that doesn’t happen, and no matter how much we like Osha, we have to let her go as Ramsay slashes her throat. Ramsay is one of the great villain of the show, and he declares war on Jon Snow in an epic letter, paving the way for the next major conflict in Game of Thrones.

Sansa, meanwhile, is the person who makes sure Ramsey will get his fight.

In Meereen, meanwhile, it’s Tyrion who has been left to keep the peace, but his message needs to be delivered to the people by a voice they trust. And that’s none other than Daenerys’ trusted advisor Missandei, yet another strong woman.

She might not fully agree with Tyrion’s plan to save Meereen, but she understands it’s the best option available for them as they wait for the Mother of Dragons to return.

Finally, we shift to Daenerys who’s being held at Dosh Khaleen, waiting for judgment from the other Khals. We see her reuniting with Jorah and Daario, but it turns out she doesn’t need their help to break free.

In what is unquestionably the highlight of this episode, which is the season’s best to date, Daenerys burns down all the Khals and establishes herself as the one true ruler of the Dothraki.

“You’re not going to serve,” she warns the kahls. “You’re going to die.” She then proceeds to burn them all alive before emerging from the flames unscathed for all the Dothraki to see.

Other tidbits from the fourth episode of Game of Thrones’s sixth season that deserve a nod are Lord Baelish’s return and the obvious attraction between Brienne the Knight and Tormund the wildling. This was the strongest episode of season five so far, and it has never been more clear that it’s the women who rule over Westeros.