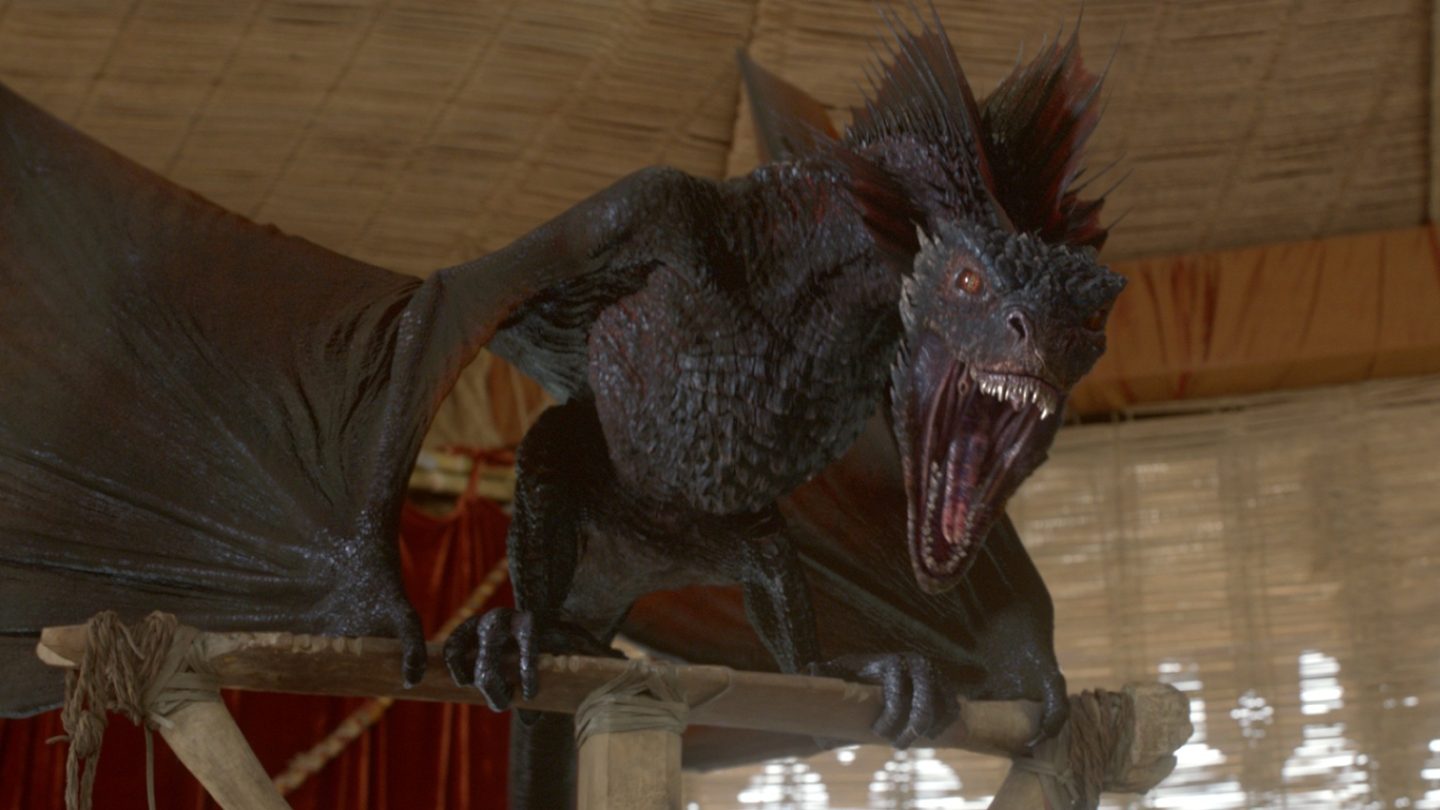 Mark Spindler’s official title with the visual effects company Pixomondo is compositing supervisor, which means he’s responsible for taking different VFX elements and wizardry and stitching them together into a seamless whole. It sounds like a super-geeky, highly technical job. But when you look at the work he and his colleagues have done behind-the-scenes for the last several seasons now of Game of Thrones, the show’s three fire-breathing dragons they’ve helped digitally bring to life and imbue with terrifying realism belie a job with, it turns out, so many layers beyond mere technical prowess.

Which is a long way of saying — for the Pixomondo team, one of the nearly dozen or so companies handling various aspects of Game of Throne’s VFX needs, rendering a make-believe idea like a dragon into existence actually first requires a ton of painstaking work before you even start with a computer. That means researching real-world animals with similarities to a dragon, so reptiles like lizards as well as bats (the former to study the scales and skin, the latter because of the wings). The Pixomondo team pored over video and real-world detail, paying close attention to the way such animals look and behave in their natural surroundings to correctly animate the scales, movements, muscles and body of Drogon, Rhaegal and Viserion — the show’s three dragons that belong to their white-haired mother Daenerys.

But it doesn’t stop there. There aren’t any fire-breathing animals in the real world to study, so to nail the realism of that aspect Spindler said the Pixomondo team analyzed the way flamethrowers spit fire, including the way flames lick up anything in their path. It’s painstaking creative work that evolved and got more complex as the dragons progressed from small hatchlings born at the end of season 1 on to the fearsome beasts of epic proportions we see in later seasons. Growth that also came in tandem with HBO’s correspondingly massive budget for a show whose final season — which begins on Sunday — has become a must-watch touchstone of pop culture.

“Of course, it’s emotional,” Spindler told BGR from Pixomondo’s office in Frankfurt, Germany, about the imminent end of the series and his team’s work for HBO’s VFX Supervisor Joe Bauer and VFX Producer Steve Kullback. Both of whom have been in charge of the visual effects for the whole series since season 3 and season 2, respectively.

“For me, it’s my sixth season now,” Spindler continued. “I started on Season Three. Some of my co-workers here started with Season Two. So it’s a long journey.

“The visual effects supervisor from HBO has also now been on the show for six seasons, so we know what he wants, and I think we have a good working relationship. The communication is quite easy. It’s something special, knowing that we’ve come to an end after having worked on this for so long.”

Spindler gave BGR a taste of how Pixomondo — one of the few VFX vendors that have worked on GoT almost from the beginning – has contributed to the look and development of the dragons, which you can see evolve in the video clip above.

The footage takes you through the dragons’ collective evolution across each season, showcasing what’s involved in the animation, rendering, matching of graphics to footage with actors, making sure the digitally rendered dragons are lit to match the rest of the scene .. and on and on.

The clip ends with a somber Jon Snow appearing to pet a mounted contraption, on top of which a dragon will be displayed so that it looks like that’s what he’s petting in the scene.

For their part, the Pixomondo crew generally always started talking with HBO about the forthcoming season pretty much as soon as the last one has wrapped. The team gets a first draft of the screenplay and storyboard to get a sense of where the action is headed. That lets them start thinking through ideas, though the VFX specialists can’t do too much until the new season actually starts getting shot.

And, as we said, it’s not all computer-based magic that turns the dragons from words on a page into scary movement on the screen. The show’s VFX professionals have resorted at times to “acting” out various movements the dragons would need to perform, with some of the Pixomondo crew at one point tied up on all fours and angrily straining at their bonds to serve as reference footage for the dragons.

The finale of the previous season gave us one of the most game-changing seasons of the show thus far, involving the “dead” Viserion. The nearly 125-foot-long computer generated beast was “reborn” as an ice dragon, thanks to the dark power of the Night King (with a helpful assist from Pixomondo) and which was shown spitting enough blue fire to completely wreck the towering Wall in the north. That set up the stakes for the showdown Game of Thrones fans around the world are waiting to see unfold over the course of its final six episodes.

“The most important thing I would say regarding the realism is you look at the real world for reference, and obviously there are no real dragons in the real world,” Spindler said about the work. “But there are certainly some animals that resemble a dragon, like lizards. There are so many documentary shots out there with closeups of animals, where you can really see a lot of detail about how they actually look and behave. Looking at things like that is really helpful.”

The hard part is in balancing the realism with the cinematic requirements of a shot, meaning once you bring the dragons to life, you’ve still got to make them look like they would look if they were really there, actually in front of the camera and in the same scene as the actors, under the same lighting conditions. To help with that, Bauer and a colleague at one point during filming held what amounted to dragon puppets on poles to help establish the framing and lighting for a shot, in addition to giving the actors something to play off of.

At another point, Pixomondo used a YouTube video they found of an eagle snatching up a goat as a reference for a scene involving the dragon Drogon, after it’s spit fire on a goat and used its claws to grab it before taking off into the sky.

To give you an idea of how complicated and sprawling the series’ VFX needs have become, one episode in the upcoming season reportedly features more than 1,300 VFX shots. While, for comparison, there were fewer than 600 in all of season 2.

As far as what we can expect to see in season 8, regarding the dragons as well as everything else, Spindler is coy. “I think the same thing that has been true for the last seasons is true this time. Everything is just bigger, more exciting.

“I think there’s the sense now that all the different parties in the storyline are really close to each other and everything is coming to an end. There’s going to be a lot of action, so less exposition is needed than in previous seasons. There are still lots of things I don’t know about, but from what I’ve seen and what I know, yes, it’s going to be exciting for sure. I’ve been a fan of the show myself, so it’s been great to be part of it. Definitely not something that comes along every day.”