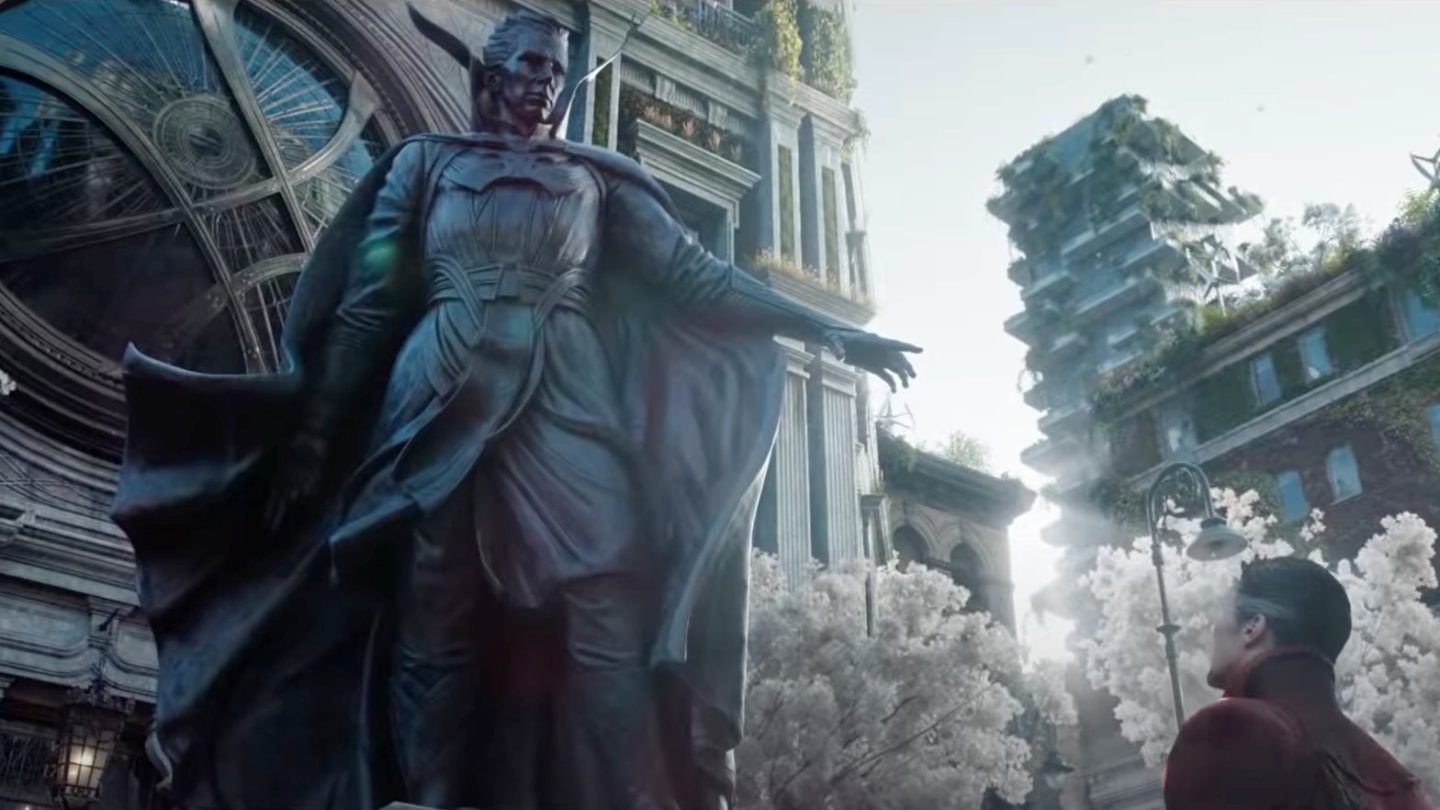 We’re just over two months away from Doctor Strange in the Multiverse of Madness, but new cameo rumors continue to drop. The newest leak comes from a well-known insider that claims Iron Man and Captain America will not appear in Doctor Strange 2. That sort of claim is certainly in line with what we’ve seen so far from Multiverse of Madness leaks. That is, not all leakers are on the same page in regards to cameos.

Marvel can use all sorts of superhero variants from the multiverse to tell this Doctor Strange story. That’s why we keep seeing all of these cameo rumors. That includes contradicting takes on certain characters. Then there are the reshoots. Rumors claim that their purpose was to add more cameos, in addition to tweaking the storyline.

With that in mind, Iron Man and Captain America variants could very well end up in Doctor Strange 2. But they might not, too. Before we look at the most recent claim, we should warn you that big spoilers might follow below.

Robert Downey Jr. and Chris Evans played two iconic characters that MCU fans fell in love with. Iron Man and Captain America were the leaders of the Avengers. The actors are responsible for turning these characters into two big pillars of the MCU.

That’s why it was so hard seeing them die and retire in Avengers: Endgame. And that’s why we can’t let go of them. We want to see them in more adventures now that the MCU is getting so much richer.

That said, the multiverse angle opens the door to seeing Iron Man and Captain America variants in Doctor Strange 2. That’s the only way we might see RDJ and Evans return to the roles so soon after Endgame.

However, there’s no turning back for Marvel when it comes to the story in the MCU’s primary reality. Reviving Tony Stark is not possible, as it would ruin his Endgame sacrifice. The same goes for having Steve Rogers back as Captain America. After all, we just got a brand new Captain America, and Anthony Mackie will now be one of the new leaders of the Avengers.

After Spider-Man: No Way Home, we learned that Marvel never planned on having Iron Man in the story. That was a non-starter conversation for that movie. Things might be different for Multiverse of Madness. But having RDJ playing a Stark version in the film isn’t necessary. The same goes for a Captain America cameo in Doctor Strange 2.

Not to mention that Marvel might want to save such a big return for a future movie where it might make more sense for RDJ and Evans to return to the MCU. After all, we got Iron Man back in What If…? but the animated series hardly focused on those Tony Stark variants.

This brings us to the newest Doctor Strange 2 cameo claim that focuses on Captain Carter (Hayley Atwell).

Marvel leaker Daniel Richtman published a new video on his YouTube account where he looks at this particular Easter egg in the Multiverse of Madness poster. Marvel revealed that poster alongside the second trailer. In it, there’s a shard of glass that shows Captain Carter’s shield.

The YouTube clip explains the detail is deliberate. What we see in the shards are clues about Doctor Strange 2. Marvel placed the shield there so that fans would spot it. That’s where the clip gets interesting, as it says Marvel hasn’t placed the entire MCU in those pieces of broken glass, as we won’t see every possible character in the sequel.

The clip says we’re not seeing any Iron Man or Captain America Easter eggs because they’re definitely not showing up in Doctor Strange 2.

What is interesting to note is that we never really expected Chris Evans to appear in Multiverse of Madness. But we saw plenty of Doctor Strange 2 cameo leaks that claimed an Iron Man variant will show up in the movie. Some said that RDJ would appear in the film. But most of them claimed Tom Cruise would play the Stark character in this movie.

Even the claim that Cruise would appear in the movie changed recently. He might not even be Iron Man. Instead, we might be looking at an Iron Monger variant from the multiverse.

As for Captain Carter, it’s unclear if the version in Doctor Strange 2 is the same as the one in What If…?. What is obvious is that Marvel wants a different variant of Captain America in the MCU, in addition to Mackie. We might see Atwell play Carter in other live-action movies down the road.

Then again, there’s a big Doctor Strange 2 plot leak that says Captain Carter will fight Wanda (Elizabeth Olsen) in the movie. It’s unclear if this Carter variant will survive.

With all that in mind, RDJ and Chris Evans could return to the MCU. Other MCU rumors say that such plans might be in the works, but they have nothing to do with Doctor Strange 2. Secret Wars is the kind of massive Avengers crossover that could bring those characters back. But that’s just wishful thinking at this point.