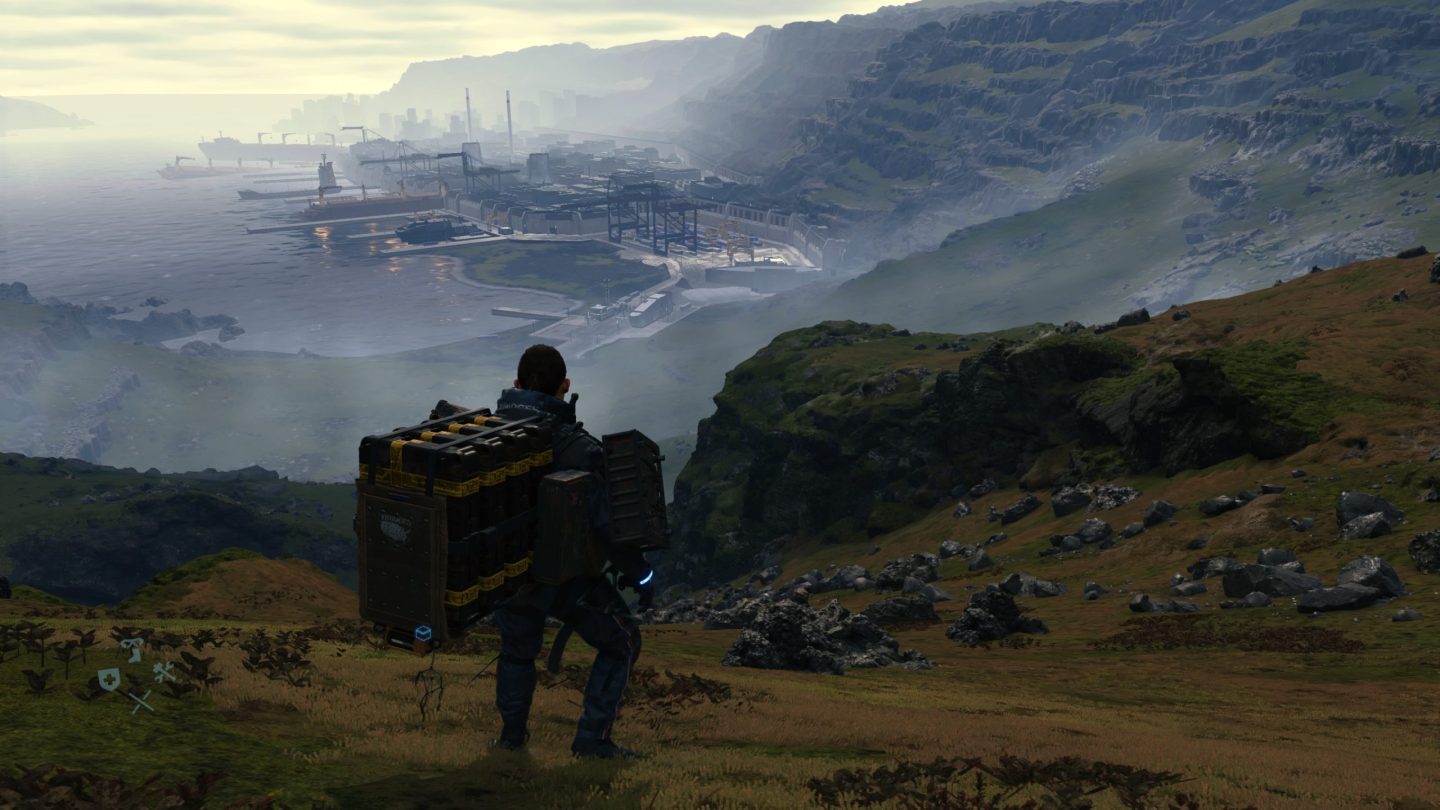 Ever since I finished Death Stranding, I’ve been thinking a lot about the games that have defined this generation. The Legend of Zelda: Breath of the Wild, Horizon Zero Dawn, Nier: Automata, and God of War all spring to mind, but none of these games had as much of an impact on me as the first game from Kojima Productions.

Death Stranding is a video game. I’m starting there because I don’t know how else to describe it. This PS4 exclusive (coming to PC in 2020) is about a man who makes deliveries in a world where few dare to leave the relative safety of their homes. It’s also about America, and identity, and death, and spirituality, and family, and especially keeping your balance when the weight of the world is on your shoulders… both literally and metaphorically.

Ahead of the game’s release, the number one question on everyone’s mind was a simple one: What do you do in Death Stranding? The answer is less complicated than you might imagine. In Death Stranding, you are Sam Porter Bridges (played by Norman Reedus, in a role that suits him perfectly), and your job is to make deliveries quickly and efficiently without losing or causing too much damage to the package. It’s an incredible oversimplification, but that’s what you’re going to spend a vast majority of the game’s incredibly lengthy campaign doing.

That may not sound especially exhilarating on its face, but much like director and writer Hideo Kojima’s other games (and many of the best open-world games), the systems of Death Stranding are what make it shine.

[Before you read any further, I would like to note that I cover some of the basic plot points that are introduced within the first hour or so during the course of this review, as well as explain many of the gameplay systems that drive the game. There is enough in the game that I didn’t write about to fill up several more reviews, but if you want to go in completely fresh (and this probably goes without saying), hold off on reading this or any review.]

In the early going, the only two things you are responsible for are your cargo and yourself. As you traverse along the uneven terrain to your next destination, you can hold down the R2 and L2 buttons to tighten your grip on your cargo. You’ll move a little slower, but you’re far less likely to drop anything if you stumble over a rock or have to contend with fast-moving waters. This is not exactly a familiar concept, but as you will come to learn, Death Stranding tosses many of gaming’s conventions to the wayside as it builds upon its unique premise.

Although your employers tell you where you need to go to drop off a package, it’s your job to figure out the fastest and safest way to get there. Your most persistent foe is America. Not only have you been conscripted by what remains of the American government into reconnecting the country (I won’t go into much more detail than that so as not to spoil anything, but yes, Death Stranding takes place in America), but the Death Stranding itself has left America a shell of its former self. BTs — strange creatures that are invisible to the human eye — roam the wasteland, waiting to snare anyone insane or desperate enough to go outside.

Lucky for Sam, he has a condition called DOOMs, which means he can sense when they’re nearby. He is also aided in his journey by something called a bridge baby (BB), which is that baby in a jar you keep seeing in all the trailers for the game. The BB is far more capable of detecting BTs than Sam, and along with some fancy electronics on his suit, the BB can help Sam steer clear of BTs. These are some of the tensest moments of the game, as when you run into a flock of BTs, you have no choice but to slow down, crouch close to the ground, and attempt to quietly weave your way through the hoard without attracting attention. Throughout the game, you will acquire more tools to help you deal with BTs, but it never makes these encounters any less terrifying. 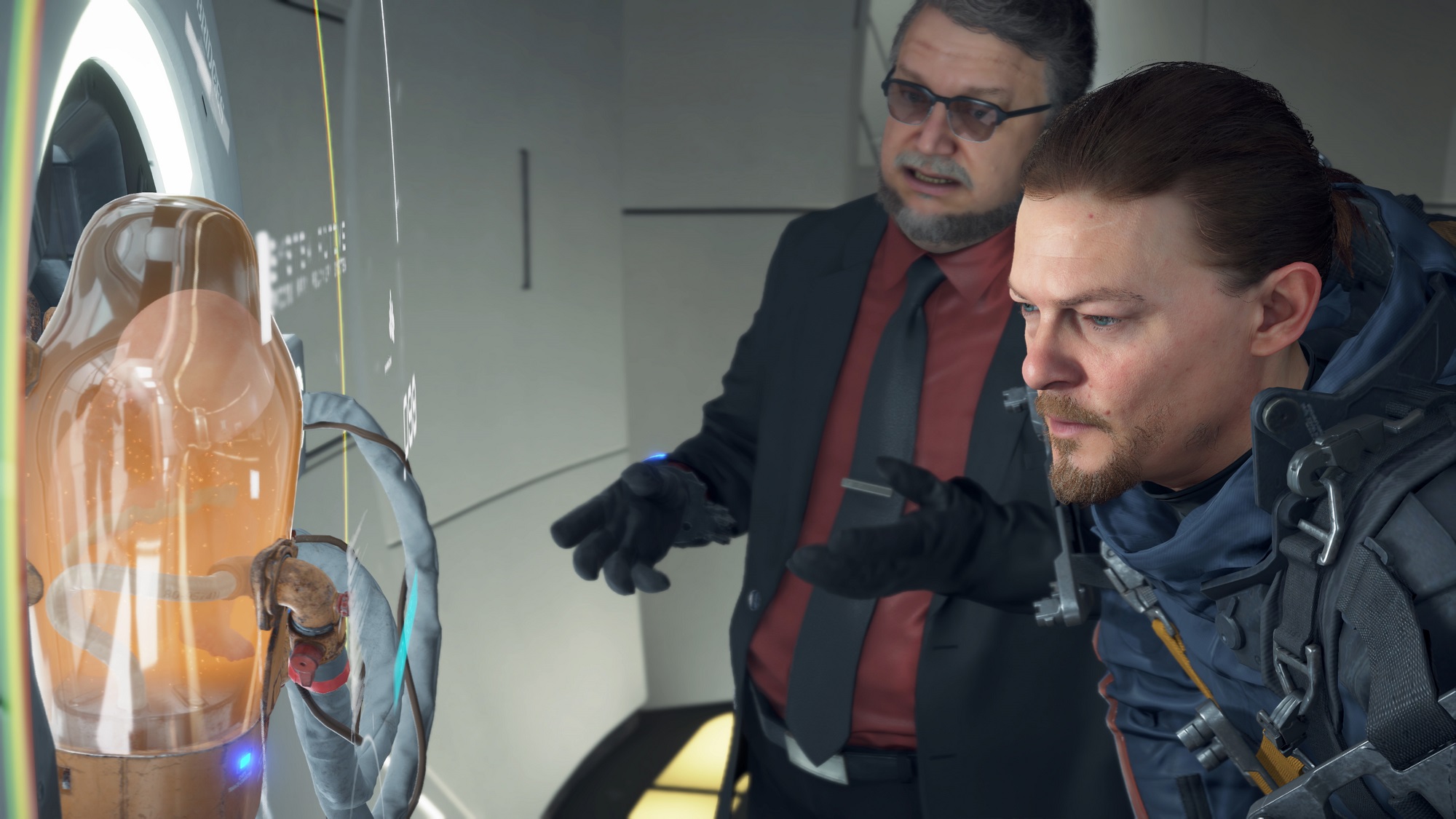 After you’ve made your first few deliveries, the world begins to open up. You always have an objective to complete to advance the story, but Death Stranding takes place in an astonishingly large open world, and there is plenty to do in that world if you need a breather from the frequently anxiety-inducing story missions. I finished the game in just over 41 hours, but there were dozens of deliveries I never even attempted, and areas of the map that I never stepped foot in. And yet I already find myself eager to jump back in, as emotionally drained as I was when it ended.

Learning how to navigate this post-apocalyptic America is tantamount to Sam’s survival (and your enjoyment), but the good news is that you aren’t alone. The Chiral Network is basically the last gasp for humanity, and as you travel west, you will expand the network by bringing more new homes and stations and cities online. Once again, I’ll refrain from spoiling any major story elements, but there is a practical application to the network as well. Once a region has been connected, you will be able to fabricate equipment at the terminals in that region. This includes everything from tools, like ladders and climbing anchors, to weapons, like grenades and guns, and even vehicles.

But the Chiral Network is also the key to the game’s shockingly pervasive online component. Death Stranding is a single-player game — you cannot invite a friend to join you as you make delivery runs — but scattered throughout the environment are signs of life. If another player drops a package and can’t complete a delivery, you might find it sitting on a riverbank on your way from one city to the next. You will also frequently find that ladders and bridges and other structures that other players have deployed in their game world have appeared in yours. 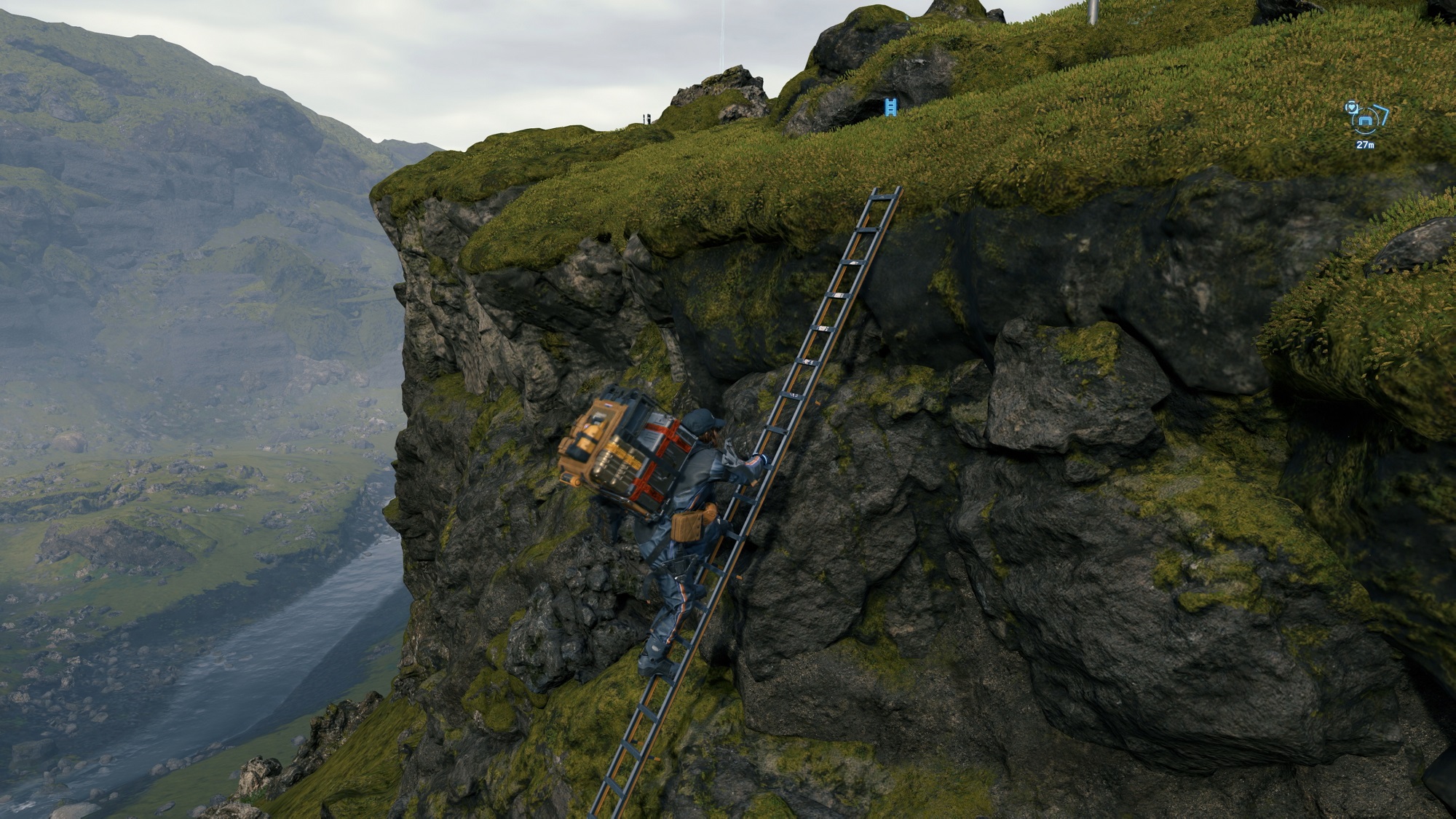 You can thank the other player by “liking” their contribution the same way you would a Facebook post, and these likes turn into experience points for their character. It’s somewhat baffling in theory, but it’s utterly brilliant in practice. I can’t count the number of times I would have been doomed had another player’s structure or vehicle not have been in the perfect place at the perfect time. It’s such a peculiar form of cooperation, but it was among my favorite elements of Death Stranding, despite the fact I didn’t even know it existed when I first sat down to play the game.

Another pleasant surprise was the depth of the RPG elements. Death Stranding is an action game first and foremost, but as I noted above, Sam Bridges will level up as he completes deliveries and, yes, receives likes from other players. This allows him to carry a bit more cargo, keep his balance easier, and provides other subtle stat boosts that increase his fortitude as the challenges increase throughout the game. And then there are the structures. In order to fabricate equipment, you need materials (think Minecraft or Fortnite). Most of the cities and waystations you visit will have a sizable selection of materials for you to choose from, but you can also find that material scattered throughout the world, and you can deliver it to any terminal to replenish their stock.

What impressed me more than anything was just how long Death Stranding was able to maintain its momentum in spite of its deliberate pace by introducing new biomes, new items, new threats, and new ways to interact with the world. It wasn’t until the final third of the campaign that I began to feel the tedium, but even that was only relative to how fresh the game felt for its first 20+ hours. I’ve also avoided discussing the story hardly at all up to this point, but I will say that as sincerely fascinating as it can be, and as riveted as I was by many of the completely off-the-wall revelations, the convolution grows to a point that even overwhelmed me somewhat, and this is coming from a fan of Kingdom Hearts, Danganronpa, Twin Peaks, and The Leftovers. This should come as no surprise to anyone who has played Kojima’s Metal Gear Solid series, but, personally, I could have done with just a touch more restraint. 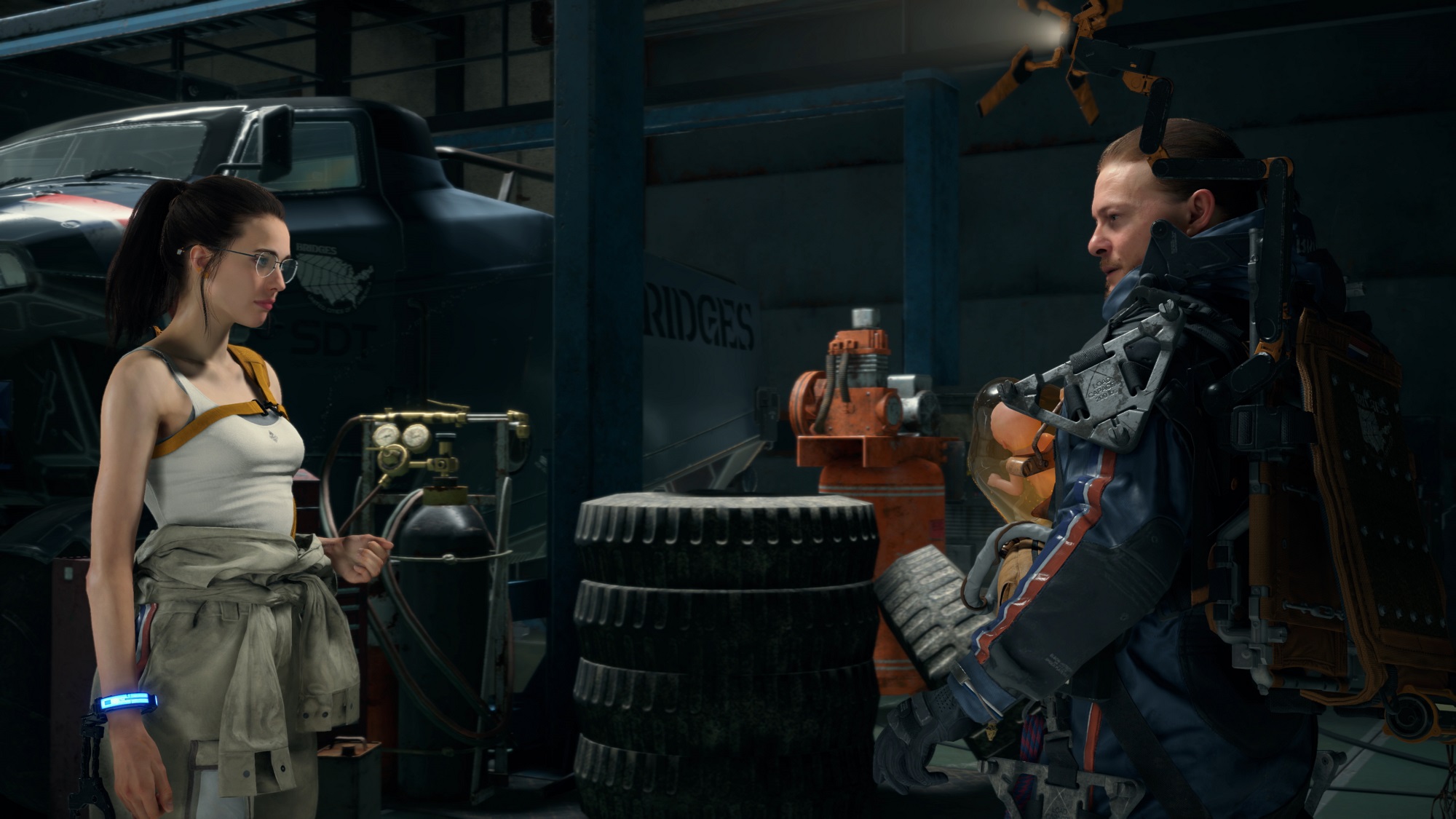 The one thing that I will say about the story is that the actors who deliver it, from Norman Reedus as Sam Bridges, to Guillermo del Toro (and Jesse Corti’s voice) as Deadman, to Mads Mikkelsen, Margaret Qualley, Léa Seydoux, and the countless NPCs and wild cameos — they all bring this head-spinning story to life.

It is impossible to fully characterize the experience of playing Death Stranding in a review without writing far more than any of you would want to read, but as I hope I’ve expressed, it was a singular experience, and one that I believe everyone with a PlayStation 4 should take part in. Hideo Kojima has said that Death Stranding is part of a new genre, and while it has elements of third-person action-adventure, stealth, simulation, and RPG, it doesn’t fit comfortably in any of those boxes. I’ve never played anything quite like Death Stranding, and I’m not sure I ever will again.

Death Stranding will be available on November 8th for PS4 and in 2020 for PC.

Sony provided BGR with a copy of Death Stranding on the PS4 for the purposes of this review.