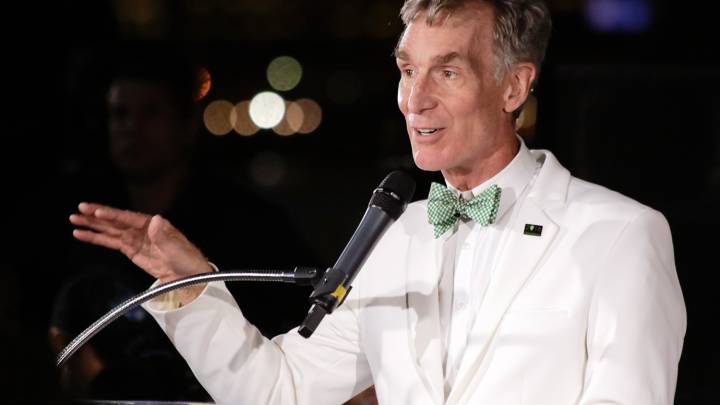 I’ve interviewed some of his peers like Neil deGrasse Tyson, for example, who can take almost any question you give him and patiently work it into an opportunity. Something that, by the end of an answer from him that’s turned into an inspired soliloquy, will have you thinking about your place in the world, wondering what’s up there, excited about the mysteries of the universe.

That’s not Bill Nye, the third season of whose TV series “Bill Nye Saves the World” is now streaming on Netflix. Bill is the kind of interview subject who, if he was confronted by an anti-vaxxer, you could imagine those bushy eyebrows sinking as he frowns and simply snaps: “You’re an idiot. This conversation is over. Done-zo!”

To be sure, this is not an attempt to pass some kind of judgement that he’s unlikeable or insufferable in his advocacy of causes like spreading awareness about climate change. You can find plenty of that on the web. And criticism, specifically, of his Netflix series. That he tries too hard to be funny. That he can be overbearing.

Those are judgements for someone else to make. These, instead, are the facts of the matter, based on talking with the man: Netflix has renewed a series starring Nye for a third season. He wears bow ties. He loves science. And he doesn’t have much patience for people who don’t likewise love science — or at least appreciate it.

I asked him, for example, what he thinks people can do to bring more of a scientific awareness to how they understand and interact with the world. Which is really the backdrop of “Bill Nye Saves the World” and which in the new season tackles topics like addiction and aging.

Bill himself points to episode 4 — “Recipes from the Future” — as particularly cool and about something he’s interested in. The human population, how big it’s getting and how we have to keep finding new ways to farm.

From the Netflix boilerplate just underneath the “Play” button on the show’s page in the app: “Emmy-winning host Bill Nye brings experts and famous guests to his lab for a talk show exploring scientific issues that touch our lives.” That’s just what you get again this time around for the show, with season three guests that include model Karlie Kloss and comedians Margaret Cho, Maria Bamford and Paul F. Tompkins.

What you get with Bill the man, meanwhile, is a kind of professorial vibe. The feeling that any minute now he’s going to instruct you to close your books and take out a sheet of paper.

In response to my question about what people can do to incorporate more science into their understanding of the world, for example, it was like I’d pressed a button.

“Get vaccinated. Let’s start there,” Nye said. “If you’re not vaccinated, you’re endangering me. Because your body becomes a petri dish for a mutation of a disease that we’ve already beaten So do that. Then I tell everybody — vote. Vote. If you have doubts about climate change, do some research on it and you’ll find it’s a serious problem caused by humans.

“The thing that’s been on my mind is the kids, the students at Stoneman Douglas in Parkland, Florida. It was a tragedy. It was awful. However, the kids that emerged from that tragedy are passionate, and they’re going to make changes. I just think when the next large block, cohort of voters — young people — outnumbers the old people, things will change very quickly. I think you’ll see climate change being addressed, ground transportation being addressed. Fairness to people of different ancestries. All this will be addressed very quickly in the scheme of things.”

That’s the kind of thing you get with Bill. Not much adornment in how he presents his view about the world — again, which is not a criticism. It may be that his detractors are used to a certain kind of persona.

I asked him why he wanted to do a Netflix show at all. “I wanted to save the world!” he answered.

He didn’t laugh or correct himself.

In bidding him goodbye, Bill told me thank you and to carry on. And then he shouted “Let’s save the world!”