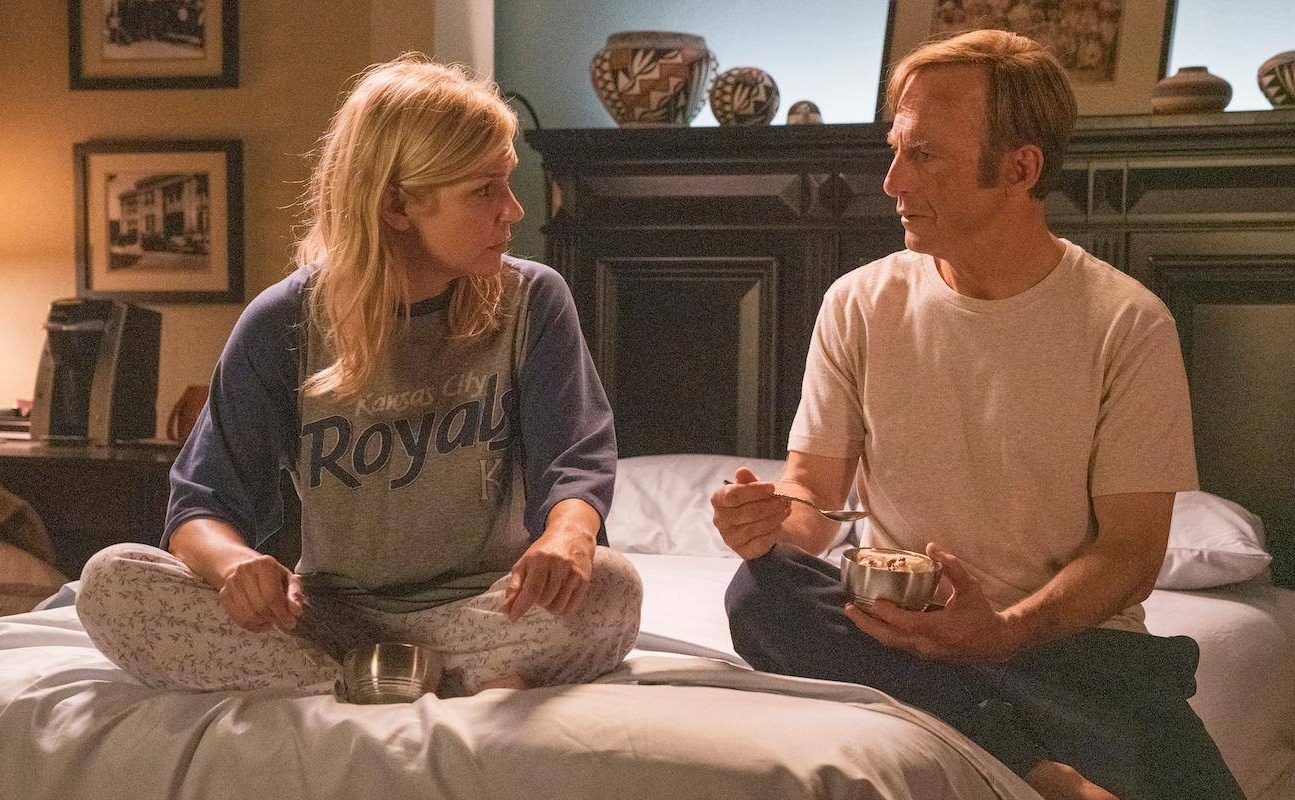 The availability of so many streaming video services, to complement the quality offerings available on cable networks like HBO and AMC, have blessed TV audiences with an embarrassment of riches to enjoy during the now-months-long coronavirus pandemic. Setting quality aside for a moment, there’s no question we’ve got more than enough content to pick from to enjoy right now, thanks to everything from the existence of streamers like Netflix and Amazon’s streaming product to new arrivals like + and Disney+.

When you think about it, it’s pretty remarkable that during the pandemic that a streamer like Netflix hasn’t really eased up on its release cadence at all (even though lots of productions were brought to a temporary halt). In July alone, for example, Netflix is releasing 60 original movies and shows. But we should also note — that brings us to an interesting point on the calendar now. We’re at the halfway point of 2020, which makes this an ideal time to stop and take stock of the TV we’ve enjoyed so far this year and to consider what’s deserving to be mentioned on a list of the best TV shows of 2020 thus far.

Below, you’ll find 8 series that comprise our ranking of the best TV so far in 2020. It’s a mix of both existing shows that debuted new seasons this year, as well as completely new series altogether. Our list is also presented in no particular order, with a couple of honorable mentions at the end, and almost all of the major streamers are represented. And with that, let’s dive right in:

Season 5 of AMC’s Better Call Saul premiered back in February, and this season got me fully onboard and declaring that I’m now much more of a fan of this Breaking Bad prequel than I am of Breaking Bad. The latter was a bit grittier and more violent, while this one has been a fascinating character study, built around watching Bob Odenkirk’s portrayal of the lawyer Jimmy McGill (aka “Saul Goodman”) slowly and surely “break bad.” It’s not all at once, and you can’t pinpoint one specific moment when Jimmy leaves the side of the angels and crosses over.

There are run-ins with the cartel, the cinematography makes the New Mexico landscape look so incredible, the slow-burn nature of the storytelling makes it feel like reading a novel to me … there’s just so much to like here.

This series from France gets my vote as the best show I’ve seen in 2020 — in fact, I’m going to go so far as to call it my favorite show, period.

The Bureau (or Le Bureau des Légendes, as it’s known in France), is a spy drama that’s been called France’s equivalent of Homeland. Season 5 debuted this month in the US (on the Sundance Now channel) but viewers would do well to first dive into Seasons 1-4, which are available directly through Sundance Now or via the Sundance Now channel add-on that you can attach to your Video subscription (and you can also buy the individual episodes via iTunes, if you like). The show is set in a “bureau” of the Dírection Générale de la Sécurité Extérieure, or D.G.S.E. — France’s equivalent of the CIA. The protagonist is French intelligence officer Guillaume Debailly (aka “Malotru,” played by actor Mathieu Kassovitz, who American audiences will recognize from the movie Amélie), and the seemingly authentic tradecraft that he and his fellow spooks employ is fascinating to watch.

I don’t know how I discovered this one. I stumbled across ZeroZeroZero by accident, but it’s a series that definitely made me glad I had an membership so that I could watch it for free. If you’re a fan of gritty series like Netflix’s Narcos, you will definitely enjoy this one.

From Amazon’s official description: “ZeroZeroZero is an … action crime drama spanning three continents and six different countries inspired by the book of the same title from best-selling author Roberto Saviano. The series follows the journey of a cocaine shipment, from the moment a powerful cartel of Italian criminals decides to buy it until the cargo is delivered and paid for. The international cocaine trade has its roots in the fragile network linking powerful organizations and unscrupulous individuals.”

I caught up to NBC’s The Good Place late, and I’m so glad I did. The series, which is available in full on Netflix, is great to binge all-at-once, which is what I did. In short, we follow the adventures of a group of humans who die and go to “the good place.” But the show isn’t a religious sermon about what happens after you die and what’s required to get to heaven — it’s more of a morality play, about the things we owe to each other as humans. You will easily fall in love with the characters, and it’s only a half-hour series, so you’ve definitely got no excuse for adding this one to your must-binge list.

Fauda is an Israeli TV series developed by two creators who wanted to reflect and dramatize some of the experiences they and others have had in the Israel Defense Forces.

Here’s how The Times of Israel describes the series: “If you’re not up to speed, Fauda follows an elite Israeli counterterrorism unit conducting undercover missions deep in the West Bank. The third season opens with leading man Doron Kabilio working undercover as a boxing coach for Bashar, a young Palestinian whose cousin is an elusive Hamas operative.” There’s a lot of action and gunplay in this taut thriller — and, fun fact: + has just picked up Tehran, a new thriller series from one of the writers for Fauda (though there’s no US release date yet).

Narcos: Mexico is a spin-off of Netflix’s original Narcos series which tracked the misadventures of infamous drug cartel leader Pablo Escobar in Colombia. Once Escobar was killed off in the Narcos series, the show continued on for a season by focusing on a cartel that thrived in Escobar’s wake, then the show decided to leave Colombia entirely and transplant itself to Mexico for this spin-off.

From Netflix’s official description: “Narcos: Mexico season 2 continues the story of Miguel Ángel ​Félix Gallardo, now the Godfather of the first Mexican cartel — the Guadalajara cartel — as he struggles to maintain control, grow his empire, and reconcile the betrayals and sacrifices he had to make on his way to becoming El Padrino. As friction between the different ‘plazas’ of his cartel rises, Fé​​lix’s control over the situation slips. Meanwhile, the death of DEA agent Kiki Camarena at the hands of the cartel and corrupt politicians brings a hailstorm of retribution to Mexico.”

When the + series Little America first debuted on the streamer, I raved that it makes a subscription to Apple’s Netflix rival worth it all by itself. But you don’t have to take my word for it — the show, an anthology series comprised of a collection of real-life stories of immigrants to America, enjoyed so much early praise from critics that it boasted a 100% critics score on Rotten Tomatoes for a little while. And it hasn’t shifted much since then. As of the time of this writing, Little America boasts a 94% score on Rotten Tomatoes and an 85% score from viewers.

After watching this 8-episode anthology series, which uses each half-hour episode to dramatize events from the lives of actual immigrants and first-generation Americans, you should know right off the bat that the series packs a big emotional wallop. There are stories like those of the single mother trying to make ends meet, a young African exchange student who idolizes American cowboys, children kept away from parents who’ve been caught up in the morass of US immigration bureaucracy — each episode tells a different story. The show’s timeliness should go without saying, but it also doesn’t beat you over the head with politics, either. If you let it, this series will put you through the wringer, you will be crushed and you will be uplifted (often within the same episode), and the best part is the “coda” at the end of each episode. That’s when you see pictures of the main characters therein and briefly meet the real-life focus of the story you just watched.

No one really needs to know much about Schitt’s Creek going into this fantastic Canadian sitcom. Available on Netflix, this comedy series is built around the once-wealthy Rose family. The wealth came from the video rental chain formerly owned by businessman Johnny Rose and his eccentric, ex-soap-star wife Moira. Their children are Alexis and David Rose, and all of them are used to the finer things of life, until they’re forced to relocate to the town of Schitt’s Creek that they own after buying it as a joke. Their forced relocation stems from the Roses’ former business manager looting the family fortune, making this a kind of fish-out-of-water story, but there’s also incredible depth and growth shown by these deceptively shallow characters that’s packed into the half-hour episodes. You’ll be hooked pretty quick.

I’d like to also give a special nod to two shows that I think are deserving of being on this list — I loved them both and thought they were fantastic quarantine binges — it’s just that neither of these came out in 2020. But I discovered them this year, so that’s why I’m tacking them on at the end.

First up is Crash Landing On You, available on Netflix.

This Korean series focuses on a South Korean heiress who has a paragliding accident and ends up across the border. She’s picked up by a handsome North Korean guard, and I’m not going to say anything else. You should be able to guess what’s going to happen from that alone. There’s a Romeo and Juliet aspect to the story, and the production team used North Korean defectors to paint a realistic look at life inside the country, and, again, the show is just fantastic overall.

Finally, I have to mention another Korean series, also available on Netflix: Hyori’s Bed & Breakfast.

This is a reality show starring a celebrity Korean couple, Lee Hyori and her husband Lee Sang-Soon. She is a retired former member of one of the first K-pop groups, made a ton of money, and then got married and retreated to South Korea’s Jeju Island. They decide to open up their home to guests as a bed & breakfast and to film all the happenings.

I got into this show after losing interest in Terrace House, another Netflix reality series (from Japan), for reasons that are too numerous to go into here. Everyone on Hyori’s Bed & Breakfast is so likeable, the visuals are great, and it will sort of mentally scratch your travel itch until it’s safe to actually to do in real-life again.