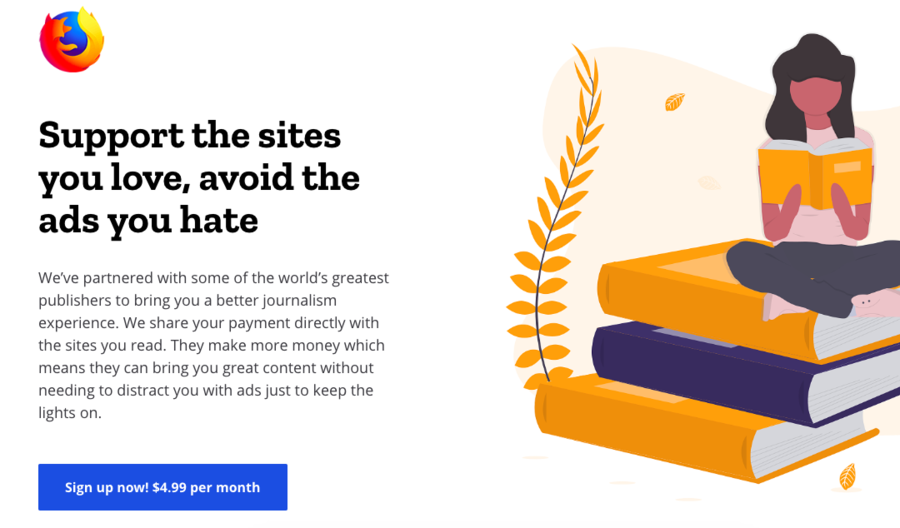 Mozilla seems poised to jump into the paid news aggregation game soon, with the nonprofit behind the Firefox browser now teasing a $5-per-month subscription product that would offer ad-free news while also undercutting by a few dollars the recently launched Apple News+. The latter being a still relatively new subscription product from the iPhone maker which, if you believe the latest string of reports, hasn’t exactly gotten off to a rousing start, with publishers anonymously complaining about the service not delivering much in the way of revenue yet.

Mozilla had said earlier this year that a partnership with the news subscription enterprise Scroll would be forthcoming, which is what seems to be coming soon. Mozilla is directing users to a survey that also includes invites to a beta launch of the company’s “Firefox Ad-free internet.” Scroll itself is still in beta, but the site says it offers ad-free versions of sites that include The Atlantic, Buzzfeed, The Verge, Gizmodo, USA Today and more.

This seems to be somewhat in line with what Apple offers via Apple News+, though the latter costs more ($9.99 a month, as opposed to Mozilla’s planned $4.99). The launch of this new subscription service also comes at a time when Mozilla is trying to diversify itself away from its main revenue stream — an arrangement with Google to make it Firefox’s default search engine.

Similar to what Apple is doing, with its increased emphasis on revenue-generating subscription offerings like Apple News+ and Apple Music, Mozilla’s leadership had been talking before now about using Firefox to start offering various subscription products. Here’s another that Mozilla is touting — a paid VPN subscription. That’s in addition to the $4.99 news service, which Mozilla says: “…enables web users to pay for an ad-free experience on their favorite sites, across their devices. By enabling more direct funding of publishers, Scroll’s model may offer a compelling alternative in the ecosystem.”