As busy as the past month has been for Pokemon Go, the biggest updates are yet to come. A little over two weeks ago, an internal memo purported to have gone out to Starbucks managers mentioned an upcoming event that would see the coffee chain collaborate with Niantic for the launch of Pokemon Go “version 2.”

We still don’t know what “version 2” was referring to, but the timing of the memo’s leak lined up suspiciously well with the addition of 100 new Pokemon in the code of Pokemon Go. Could “version 2” be the launch of Generation 2?

DON’T MISS: The Last Guardian review: Shadowed by a colossus

After two weeks of silence, the floodgates opened up on Monday night and leaks began to pour forth. Starbucks updated its retail website with detailed information about an upcoming Pokemon Go event that is set to begin on December 8th, coinciding with a “new update” that will bring “new Pokemon” to the game. 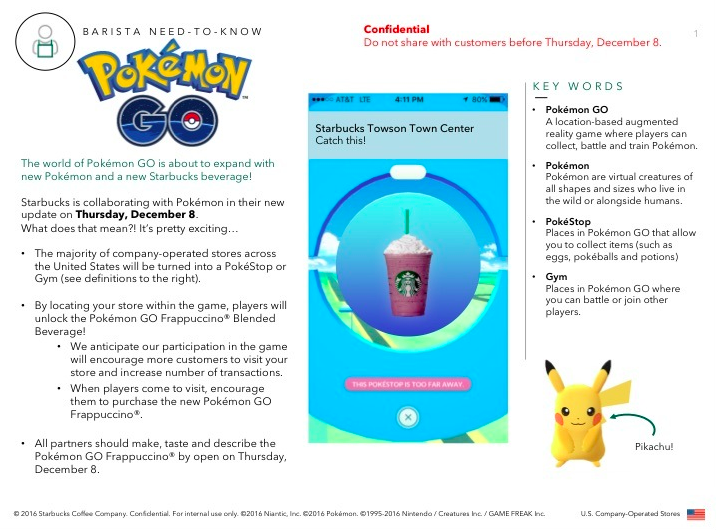 As you can see in the official documentation, virtually every Starbucks in the country will become a Gym or a PokeStop (other than a select few that don’t meet some unspecified requirements). Starbucks stores will also serve a promotional Pokemon Go Frappuccino from December 8th to stir up interest.

As Pokemon Go Hub points out, there’s not much work left to be done if Niantic wants to bring 100 new Pokemon into the game by Thursday without adding any new moves. On the other hand, if new moves need to be added before Generation 2 can launch, the developers will likely need to release a client update today.

Before we get too far ahead of ourselves, it’s worth pointing out that none of this has been confirmed by either Niantic or Starbucks. That said, the proof has begun to mount up, and it’s not like we’re going to have to wait very long to find out whether or not a dedicated troll was just wasting our collective time.

Tweet
The Walking Dead episode 7: The one that could have been great, but nah