Apple customers are generally a shockingly loyal bunch. The company’s high repeat customer rate can be attributed to a combination of factors that concern iPhones themselves as well as Apple’s industry-leading customer service. Dealing with Apple’s customer care department has always been a pleasure compared to dealing with rival companies, and iPhones themselves have historically been very reliable, offering a consistently smooth user experience that people love.

But now, a new study suggests that things may be changing for the worse where the iPhone user experience is concerned.

Blancco Technology Group used its mobile diagnostics tools to collect performance data from millions of mobile phones in the second quarter of 2016, according to a newly released report titled “Q2 2016 State of Mobile Device Performance and Health.” The anonymized data was then used to determine how often smartphones fail, how and why they fail, and which third-party apps crash most frequently on each of the two major mobile platforms.

The results of the new study are surprising, to say the least. 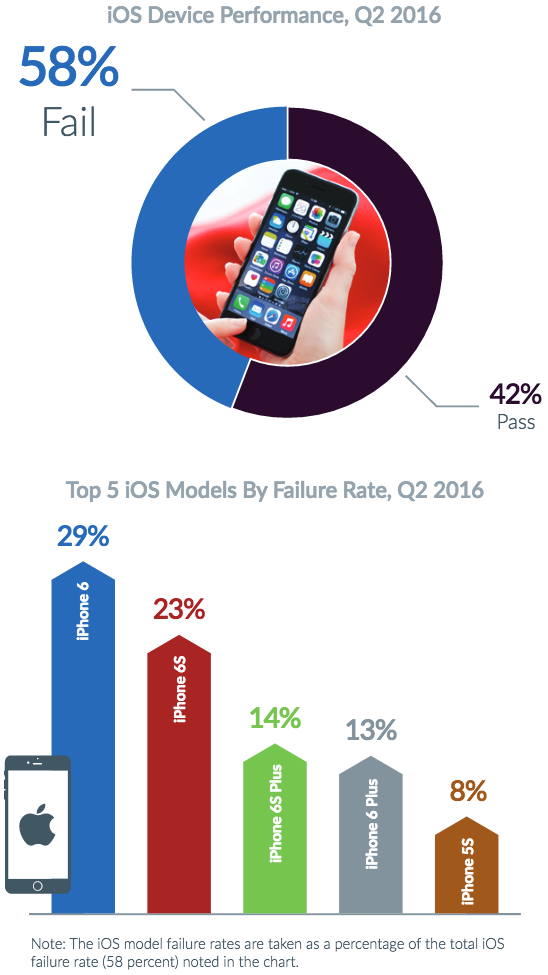 According to Blancco’s data, iPhones had an overall failure rate of 58% in Q2 2016. That figure ballooned from just 25% in the prior quarter. Meanwhile the rate of failure across all Android devices covered in the study was just 35%, down from 44% in the first quarter of 2016.

The study uses the term “failure” to cover a wide range of both first-party and third-party issues. Failures can be anything from Wi-Fi connectivity issues and headset malfunctions to phone reboots and third-party app crashes. That said, the results are still somewhat surprising considering how solid Apple’s third-party app ecosystem has been over the years.

Apps crashed on exactly 50% of the iPhones included in Blancco’s study, while just 23% of Android devices experienced app crashes. That’s a massive discrepancy.

The firm found that Apple’s iPhone 6 experienced the highest failure rate among iPhones at 29%, followed by the iPhone 6s (23%), iPhone 6s Plus (14%), iPhone 6 Plus (13%) and iPhone 5s (8%). Among Android handsets, Samsung phones experienced the highest failure rate at 26%. In terms of the most common failures on each platform, app crashes with the biggest issue on iPhones (65%) while problems with the devices themselves were far less common. On Android devices, camera issues (10%) and battery problems (10%) shared the top slot.

Tweet
World’s first self-driving taxi is operational in Singapore, and it’s not Uber