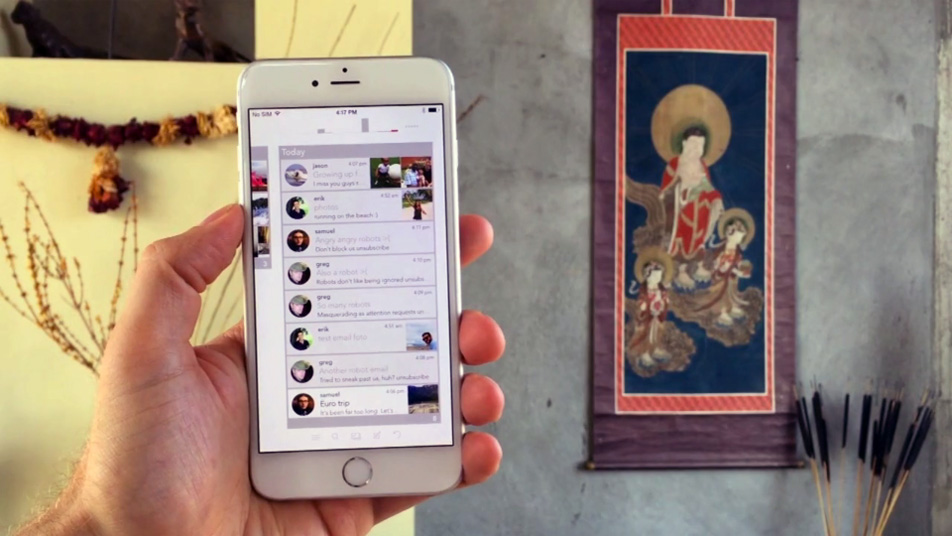 If I had a dollar for every time a company emailed me with news of a “revolutionary” app or product that will “change the way” people do whatever it is this particular thing addresses, I would be retired on a beach somewhere right now. But alas, I’m sitting in my office with an inbox full of annoying PR pitches instead. Every once in a while, however, something crosses my desk that actually does deliver on the lofty claims posed by the public relations firm that emails me, and such is the case with a new free iPhone app that was just released on Thursday.

DON’T MISS: Does iOS have a bloatware problem?

The app in question is called Geronimo, and it just launched for the iPhone and Apple Watch. The latter version is actually quite interesting because it lets you read full emails on your Watch, if that’s something you’re interested in doing. The former is where we’ll focus though, because it really does change the way you use email.

Geronimo is a time- and gesture-based email client that positions all of your emails on a horizontal timeline. The app makes it insanely easy to zip through your emails using tilt gestures, and then you can act on each message with a flick, or you can drag a message to one of four hot corners for delete, snooze, archive and tag functions.

Confused? Watch this video to see how the app works:

I have been testing Geronimo for more than a week now and I’m very impressed with it. For me personally, though, it’s not the best solution out there. I am very much an “inbox zero” advocate, and Geronimo isn’t an app that focuses on clearing your inbox as quickly and frequently as possible. Inbox zero isn’t for everyone, of course — in fact, most people don’t operate this way — so Geronimo clearly has a massive addressable market.

If you want to check it out, and I highly recommend that you do, you’ll find Geronimo’s full description below, followed by a link to download the app from Apple’s App Store. Of note, it currently only works with Gmail and Google Apps.

A modern, design-driven reinvention of email for the iPhone.

• HORIZONTAL TIMELINES… See your email stretched out on a timeline and focus on just the day at hand (or at that pesky last Thursday where you got 120 emails behind). No more tyranny of the single vertical list.

• INTERACTIVE MOTIONS… Unique gestures such as flicking, stacking up emails, and wrist snaps to make email faster and more interactive. Tilt your phone up & down to move through mobile emails on the go. Go even further as advanced motion features unlock over time by simply using the app.

• SEPARATE ROBOTS FROM HUMANS… Emails sent by robots (newsletters, notifications, marketing) take up a lot of inbox space and greatly contribute to our feelings of email overload. Geronimo is built in a way that allows you to shrink or hide robot emails so you can deal with real humans who you should get back to (or who might need to be hounded so they get back to you). Let’s rehumanize email and silence the robots.

• ATTACHMENTS PREVIEWS EVERYWHERE… It’s now easier than ever to check out attachments without actually opening and going through every individual email. They all show up and open lightning fast from the main timeline grid. You can also see all the attachments a friend or colleague has sent to you over time.

• ADD TEXT AND SCRIBBLES ON TOP OF PHOTOS… Annotation has now been brought to the inbox for the first time, bringing email into the modern world of fast, visual mobile communication. Marking photos up can be super efficient for work or just addictively fun.

• PICK UP EMAILS & TOSS TO YOUR FOUR ‘HOT CORNERS’… What if we weren’t limited to ‘slide to archive’ being the only interaction pattern for email? Taking a whole new view of interacting with our mobile devices, the designers and game developers at Jumpin Labs created a ‘hot corners’ interface for sorting your email. It’s fast, fun, and can be customized so the corners represent whatever folders and labels are most important to you in your life.

• REARRANGE EMAILS… With Geronimo, users can better organize their emails, arranging them in the order that they desire versus the chronological order that emails normally arrive in. This inbox curation leaves users more in control than ever.

Geronimo also has created the first design-driven email experience for the Apple Watch.