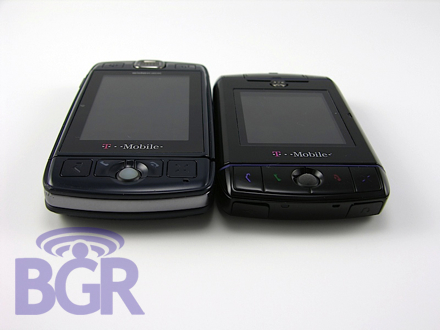 We were fortunate enough to preview the Sidekick Slide way back in July, and for the most part, our opinions and views haven’t changed. Instead of just doing a review on the Sidekick Slide, we’re going to pin it head-to-head with the Sidekick LX. For each category you’ll see our opinions on both of the devices, so sit back, relax, and put them profiles on “Buzz”.

Sidekick Slide: If you’re a previous Sidekick user you’ll immediately notice the refined look of the new OS, new system sounds, and a couple of other handy features.

Sidekick LX: We might be hearing things, but we noticed different system sounds on the Slide, and the LX. In general, the Sidekick LX really shows off the new OS nicely because of the real estate screen space.

Sidekick LX: We’re in love with the Sidekick LX’s screen! At a resolution of a 400×280, it provides ample room when web browsing, or just doing general tasks with the device. This is the main reason we’re so inclined to stick with the LX. It really is fantastic.

We can’t really show off the differences between the Slide and LX because they both have the exact same IM clients on board. Again, LX screen size makes IMing oh-so-easy!

Sidekick Slide: The Slide’s physical size is the smallest of any Sidekick yet. It’s even thinner than the LX at 17.2mm, and is perfect for someone constantly on the move, yet not willing to give up Danger’s OS.

Sidekick LX: The LX is really for the more hardcore Sidekick users. It is 21.8mm thick, wider, and longer than the Slide, but for anyone with large hands, this is the way to go

Sidekick Slide: When you make the Sidekick smaller, the keyboard obviously will get smaller, too. The Slide’s keyboard is actually hard plastic circular-shaped keys, and while we could get used to them, there is minimal tactile feedback. We can see the younger / female market loving this.

Sidekick LX: As the manufacturer of probably the best keyboards for mobile devices on the planet, Danger can’t mess with success here. And they haven’t pretty much. The LX’s keyboard is roomy, extremely pleasurable to type on, and sort of combines the Sidekick 2’s rubber keyboard, with the Sidekick 3’s plastic key keyboard into one. This turned out very well, and we have no keyboard regrets.

Sidekick Slide: We’ve got Motorola for the first time, and we’ve got Sharp for the LX. Motorola came to play and we think they did a great job. Reception is on-par with average Motorola reception, and we hardly noticed any “two-dot dances” or “X’s” we previously have gotten on earlier Sidekick models

Sidekick LX: The LX is physically a bigger device. That leaves for room to play around with the antenna, and it worked. The Sidekick LX’s reception is fantastic, and totally trumps any previous Sidekick model. It is one hair-level better than the Slide in our unscientific tests.

Sidekick Slide: Motorola integrated the ear speaker on the actual screen panel, instead of the d-pad where all of the ear speakers have always been housed. This was an awesome move, and provides the most clear and not awkward talking experience of any Sidekick to date. It is also incredibly comfortable.

Sidekick LX: As we mentioned above, the ear speaker is housed on the d-pad which is on the left side of the phone. We don’t normally use the Sidekick devices as phones, but when we tried it out, we noticed a buzz / hiss through out all conversations, and after a couple minutes the d-pad started to get annoying.

Sidekick Slide: The Slide’s volume ups the LX by a little bit. We hear a much louder and fuller sound when using the Slide, and you don’t get those fun lights to help you know when you’ve got a call or message, so that speaker better be on point! And it is.

Sidekick LX: Definitely wished it was louder, but it is not iPhone quiet. Speakerphone when talking on the phone was pretty good and definitely audible, but MP3 playback is a little tough. We also miss IMs sometimes because of the low volume

Side note to Danger: Integrate vibrate with the AIM IM sound for the love of god, already!

We actually don’t have to split this up because as far as we can tell, the Catalog is actually exactly the same on both devices. We reported that the Catalog would stop using “blocks” to show how much Application / Game space you had left, and we were 100% on the money! We finally have the storage space shown in Kilobytes, and this helps judge the remaining space more accurately. Something which you’re not able to do, is store Applications / Games to your memory card. This really puts our mind to work, because we have no idea why! It is not like you could copy the app off the memory card and send it to your friend so they can install it for free! The Sidekick platform is only open to developers, so with out a dev key, you are not able to do anything besides buy apps and games. Come on, Danger! If I want to buy more stuff, but don’t have space on the handset, you’re not going to let me? Totally wack! On the flip side, if you do uninstall something you bought, you’re free to install it again because the Sidekick back-end keeps track of your purchases. Not the best of methods, but at least you don’t have to buy something over and over again.

We hope you liked our head-to-head battle between the Sidekick Slide and the Sidekick LX. What’s our ultimate conclusion? If you’re a hardcore Sidekick user you’ll want to grab the LX. The keyboard and screen alone make this a win. The Sidekick Slide isn’t really beneath the LX on the totem pole, so if you want an awesome phone, but love the Danger OS all in a small device, you will definitely want to pickup the Slide. It’s a hard choice, believe us. We switched from the LX to the Slide, back to the LX probably 6 times alone in the past day, but for now, we’re sticking with the Sidekick LX. The screen is just too good…

Click on over to our Sidekick Slide vs. Sidekick LX gallery!

By Maren Estrada 24 mins ago

By Chris Smith 55 mins ago