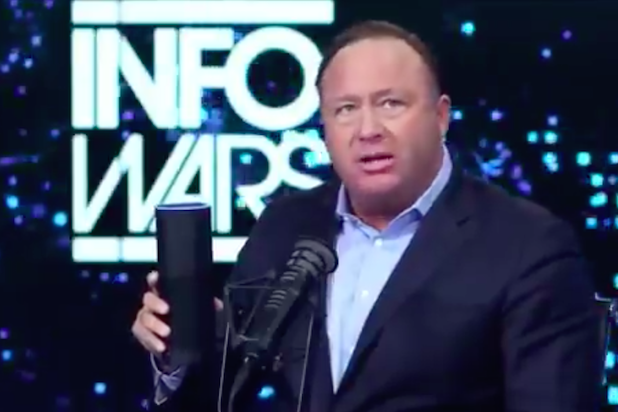 Major tech platforms have incrementally been pushing content from controversial broadcaster Alex Jones, founder of the conspiracy-peddling site Infowars, off of their services. Removing some of his videos here, taking down his podcasts there.

Following Apple’s removal of five Alex Jones/Infowars podcasts, Spotify following suit and Facebook removing four Infowars pages from the site, YouTube also appears to have now fully kicked him off its platform. Try to visit the Alex Jones Channel on YouTube, which boasted 2.4 million viewers, and you’re greeted with a message in a red box across the screen that reads “This account has been terminated for violating YouTube’s Community Guidelines.”

Following an initially weak response, Facebook had been under fire for, amid a push by the company to address the proliferation of fake news, allowing Infowars to continue sharing its content and conspiracies about the Sandy Hook shooting, pizza gate and others unabated.

Jones — who’s being sued by parents of children who died in the Sandy Hook shooting after initially insisting the attack was staged — took to Twitter Monday morning to use his one remaining major platform, other than his own website, to declare that he’s been banned from the Internet.

Without mentioning Jones by name, YouTube has released a statement explaining that “All users agree to comply with our Terms of Service and Community Guidelines when they sign up to use YouTube. When users violate these policies repeatedly, like our policies against hate speech and harassment or our terms prohibiting circumvention of our enforcement measures, we terminate their accounts.”

The Alex Jones channel began to accumulate strikes after posting clips in which it argued the Feb. 14 shooting at a Florida high school involved survivors described as “crisis actors.”

It remains to be seen what action Twitter may take against the controversial host and his channel. To be sure, his business, as noted by CNET, makes most of its money peddling nutritional supplements on the Infowars website, which also hosts its own videos. Also per CNET, “Jones has been widely criticized for promoting untrue, virulent hypotheses about tragic events like the 2001 terrorist attacks on World Trade Center in New York that killed nearly 3,000 people and the 2012 shooting at Sandy Hook Elementary School in Connecticut that killed 26 students and staff.”

TechCrunch argued just a few weeks ago that banning Jones effectively turns him into a martyr. Indeed, his supporters are out in full force on Twitter today, decrying what they see as a full-throated attack against free speech.