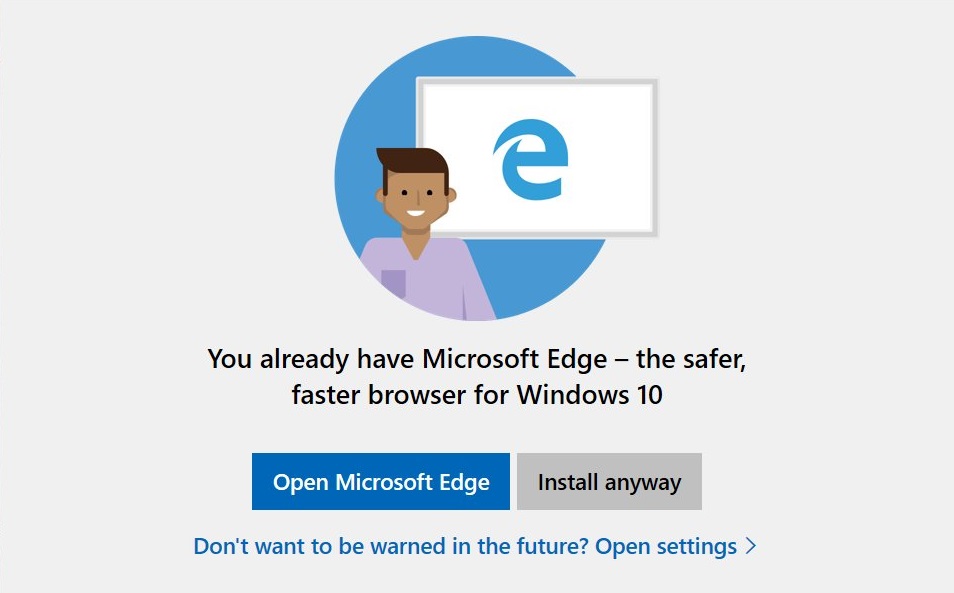 Microsoft Edge is undoubtedly an improvement over Internet Explorer, but a vast majority of Windows 10 users prefer Chrome and Firefox. In fact, nearly 60% of the worldwide market uses Chrome (according to StatCounter), which has to be the reason why Microsoft is resorting to questionable methods in order to convince Windows 10 users to stick with Edge rather than switch to another browser, such as Firefox or Google Chrome.

With just a few weeks left to go until Microsoft is ready to roll out its Windows 10 October 2018 Update, a few testers have reported seeing a new warning prompt when they try to involve a third-party web browser, stating: “You already have Microsoft Edge – the safer, faster browser for Windows 10.”

They’re then given two options: “Open Microsoft Edge” or “Install anyway.” Windows 10 also gives users the ability to disable the prompt altogether, but if any technologically illiterate individual sees a window pop up informing them that the software they are about to install is “unsafe,” chances are they will heed that warning.

The good news is that The Verge has learned from sources familiar with Microsoft’s plans that the warning message will not be included in the final version of the October 2018 Update. That’s not to say that it will never be added, but at least for the time being, we don’t have to worry about our parents calling us to tell us that they tried to install Firefox and are now convinced that their computer has an incurable virus.

This isn’t the first time that Microsoft has attempted to sway users toward its browser. In the past, Windows 10 users who use Chrome have received desktop notifications about Edge, and for a short time, Microsoft forced Windows 10 Mail users to use Edge for email links, but had to reverse course after a backlash.