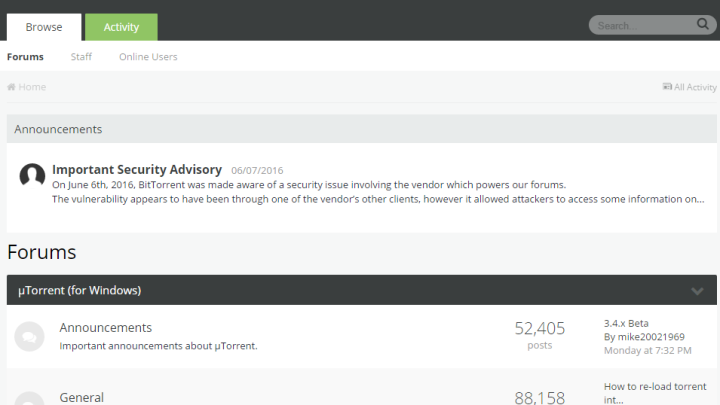 Torrenting TV shows isn’t a particularly risky activity, but most pirates tend to prefer to keep their identity a secret. That’s why a security breach on the forums of uTorrent, the internet’s most widely used torrenting software, is not a good thing.

As TorrentFreak reports, uTorrent’s 300,000-strong community forum appears to have been the victim of a hack. According to a post on the forum, BitTorrent (which owns uTorrent) was made aware of a security breach on June 6th. It’s unclear exactly what user data the hackers made off with, but usernames, passwords and email addresses are a safe bet to have been stolen.

This is bad because of the same reason all hacks are bad: people often re-use passwords across many different accounts, and with 300,000 username/password combos, attackers have all sorts of attacks to try. Last week, TeamViewer users saw their accounts being taken over and PayPal balances drained, and the fingers are being pointed at leaked credentials from a 2012 LinkedIn breach. This hack could see more of the same.

There’s another reason for pirates to be a little worried, however. It’s a safe bet that anyone with an account on the uTorrent forum is a fairly active pirate. Copyright holders have proven that they won’t pull punches to track down suspected pirates, and you could see a list of email addresses of known pirates being very valuable to them indeed.

If you were a member of the uTorrent forum, it goes without saying that you should change your password, on uTorrent or anywhere else you used that password. For the rest of us, it’s a handy reminder of the value of a password manager, and anonymous throwaway email accounts.