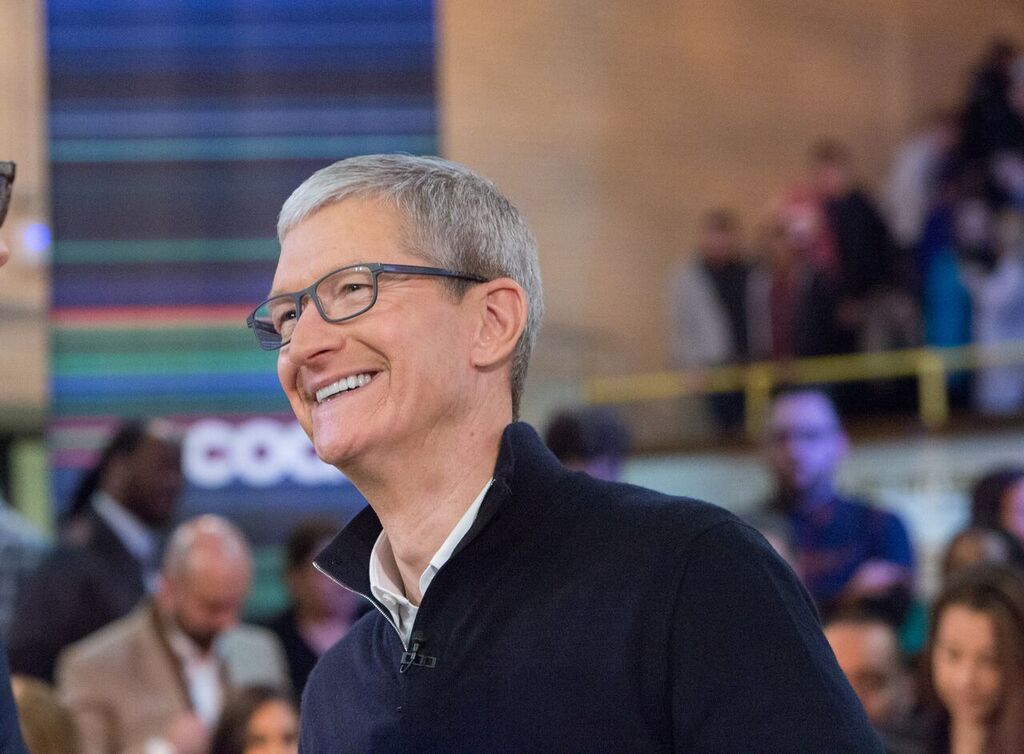 Last week, Apple CEO Tim Cook sat down for an hour-long interview with Recode’s Kara Swisher and MSNBC’s Chris Hayes. The full interview touched on nearly everything you can imagine, from Apple’s legal difficulties to Tim Cook’s opinion about DACA.

The full interview is well worth a watch for any ardent Apple followers, but in case you don’t have an hour of your life to spare, we’ve rounded up the six the most relevant quotes from Steve Jobs 2.0 below.

On the robots taking all the jobs:

Cook: So, we’ve had this significant productivity change in the United States for a long time, and there have been jobs that have been displaced, but frankly, many more jobs have been created than displaced. What we didn’t do a good job of is taking care of the people that were displaced and getting them into the jobs that were being created. That is a muscle the U.S. has not done a good job of building.

HAYES: And for not – not for lack of trying. This solution, right – you’ve got the Trade Adjustment Act, you’ve got all sorts of job retraining funding starting all of it way back in Clinton – the idea was, “look, we now we live in this era of creative destruction, jobs are going to go away, and the solution to that is retraining.” It hasn’t really worked. I mean, on scale, it hasn’t really been effective. Is there a responsibly that you at Apple or other tech companies have to be part of that rather than that being something the –

COOK: Yes, I think as is the case in most huge problems that are complex, we should not all sit around waiting for government to tell us what to do. This should be something that government and business are working together on, and I do believe we have a responsibility. I feel it.

Cook: We’re not – we’re not doing the – the beauty contest kind of thing. We’re not – that’s not Apple. And – (APPLAUSE)

HAYES: What do you think about the beauty contest model? I’m watching cities line up to essentially throw subsidies and in some cases, hundreds of millions of tax dollars at Amazon to get them to come. You’ve got Foxconn in Wisconsin that signed this big contract and the subsidies are now looking like they’re hundreds of millions of dollars there. What do you make of that kind of competition?

COOK: I – I think that each state – I think the great thing about the U.S. is – is freedom. And I think if states want to compete for things, then – then god bless them. I think that’s – that’s sort of – that’s a part of America. And so I don’t – I don’t condemn it. I think it’s their decision. But from our point of view, we didn’t want to create this contest. Because I think – because I think what comes out of that is you wind up putting people through a ton of work to select one. And – and so you wind up – that is a case where you have a winner and a lot of losers, unfortunately. I don’t like that. You know, my – (APPLAUSE) I – most – most things in life I do not view as win-lose. We always – the – the best things you can ever do in business is find the win-win. You know, whoever you’re working with. If you’re trading between countries, you find a way for both to win. If you’re working with a partner in business, find a way for both to win. That contest is set up as a win-lose and not something I want Apple to be a part of.

COOK: But life is really different than that. These companies are really different company to company. And, so, what I think has to be done – we have to think about how this – these profiles can be abused. And I might have a different view than you. I might be more on the privacy side than most, right? I – and I suspect everybody has a personal different level of sharing that they will do, but everybody should know what they’re doing. Everybody should know what they’re giving up. And not only the specific data points, but the issue is more of the whole line that people can draw, right? It’s the – when I know this, plus this, plus this, plus this I can infer a whole bunch of other things and that can be abused. And it can be abused against our democracy. It can be abused for an advertiser as well. To me it’s creepy when I look at something and all of a sudden it’s chasing me all the way across the web. I don’t like that.

HAYES: Particularly when I brought it! (APPLAUSE)

COOK: So, I think what has to be done is the type of information has to be looked at that companies can hold. I think the connection and sources of data have to be looked at. When you own many different properties, when you’re the owner of many different properties and I can take the information I’ve learned about you from this property, add it to what I learned about you here and here and here. And there’s no reasonable alternative for people.

On NRA and free speech:

HAYES: One of the questions that we got the most out on Twitter because of all the focus right now on the NRA and your praise of Parkland students was “Why is Apple streaming NRATV and how should we interpret that in the context of the kind of ethos that you just described?

COOK: Yes, it’s a good question. First of all, we don’t stream it. We don’t stream it. We place the app in the App Store so somebody can go in and download it, and they stream the content. So the question on the – that certain app is we don’t want to take a view that throttles the public discourse on something, right? Public discourse is an important part of democracy. Discourse is – democracy without discourse is not a democracy, right? And so, now do I like their tactics, their positions? Honestly, no, and some of the things they’ve said are unbelievably distasteful, and I don’t even think represent their members well, right, from the people that I know from my heritage in the South and so forth. But their point of view, along with the alternate point of view, I think it’s actually important for the public to hear that, and I wish it could be done in a not vitriolic tone and the – all of the accusation and personal attack that is on there. I don’t subscribe to any of that at all. And you can bet that we continue to monitor and if it walks into the path of hate speech or some of these other things then we’re cutting it off. All right. (APPLAUSE)

HAYES: It’s sort of a – in some ways it’s sort of a perfect illustration of just how thorny this has gotten for everyone, right. Because Mark Zuckerberg is talking about well, we’re trying to figure out whether calls to ethnic cleansings against the Rohingya in Myanmar violates our terms of policy. You guys got to figure out – you guys have a lot of power right now. I want to take a –

COOK: But I do want to make this point is in a – in a democracy, free speech has to have as wide a definition as possible.

HAYES: I agree with that.

COOK: Right. It doesn’t have to include hate speech. At least in my definition of it, right. And certainly our store isn’t subject, we’re not the government, it’s not subject to that – to that rule but I – we do want to allow as wide a discourse as possible without stepping over the line, right.

SWISHER: The FBI today, same thing? Apple sticking with that?

COOK: Yeah. Yes. Absolutely. The – here, let me give you the short version of this is the cyber risk for all of us, individually and as a company, has gone up exponentially even since that occurred. The only way to protect your data is to encrypt it. There is no other way known today. And so, if I were you, I would do business with no one that wasn’t doing that. Now, it is a thorny issue from a law enforcement point of view, because they may want to know what you’re saying, and I don’t have access to what you’re saying. And my view is kind of simple, is I don’t think that you as a user expect me to know what you’re telling people, right?

HAYES: Apple’s a company that employs a lot of immigrants. What are you guys seeing on the front lines? Is it harder to recruit people to come here given the current political environment?

COOK: Yeah, I think on the student visa piece, I think part of it is the rhetoric. I think part of it is the cost of college is too high, and that not only effects our folks domestically, but it effects the international as well, and there are other international schools that are becoming more competitive as well. But here’s what were seeing. I talked to a lot of folks in our company. The DACA situation is one that I am truthfully, as an American, deeply offended by. (APPLAUSE) The DACA situation is not an immigration issue. It’s a moral issue. This is a moral issue, and – (APPLAUSE) – this is one that goes to the core of who we are as Americans. Who among us would think that it’s the right thing to do to kick somebody out of this country that came here when they were one, two, three-years old, that have only known this country as their home, that know no other country as their home. This just doesn’t make any sense. And so I don’t like that the gun was ever fired here. It should have never been fired –

COOK: It should have never been done.

HAYES: The president should not have revoked it.

COOK: The Attorney General should not have revoked it. Whoever revoked it should not have done this. (APPLAUSE) And I don’t see this as a partisan issue. This is not about whether you’re red or blue, conservative or liberal. This is about America, right? This is that simple. And so, I’m very disappointed with both parties that they have not acted. (APPLAUSE)