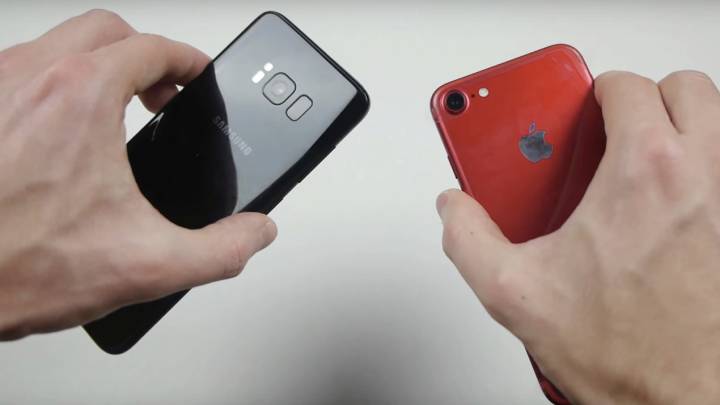 The first Galaxy S8 drop test is here, folks, and the news isn’t exactly surprising. The phone has a great design, and it’s probably been thoroughly tested in Samsung’s labs, but that doesn’t mean it’s going to be accident-proof. Dropping the all-glass design from a considerable height will result get you exactly the results you anticipate: The glass will shatter, and you’ll have to take the phone in for repairs.

YouTube channel TechRex appears to be the first one to put the Galaxy S8 through a drop test, although it’s likely many others will conduct additional tests to verify the phone’s durability.

TechRex went for a direct comparison with the recently released Red iPhone 7 and dropped both smartphones on their sides, and then on the screen.

The phones hit concrete after a 5-foot drop, and both displays shattered on the second attempt — that’s when the phones were dropped directly on their screens.

The iPhone 7’s screen took the worst hit, and the phone was unusable after the second drop.

The Galaxy S8, who’s actually the phone you might be interested in right now, was unable to survive a 5-foot drop either. When it landed on the screen, the Infinity display shattered. And while the phone did work after the accident, it clearly needs repairs.

So if you’re planning to buy the Galaxy S8 or Galaxy S8+, or if you’ve ordered it already, then go ahead and get yourself some protective gear for it, including screen protectors and a case. Remember that both the front and the back of the phone are made of glass, so they both need some protection during real life use.