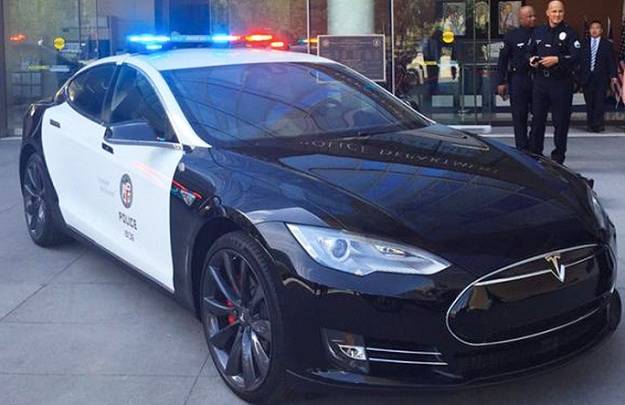 When Elon Musk boasts that Tesla doesn’t know how to make slow cars, he absolutely means it. Speed wise, Tesla’s crowning achievement has to be the Tesla Model S P90D. With Ludicrious Mode enabled, a top-of-the-line Model S can go from 0-60 in just 2.8 seconds. At the same time, the Model S is also notable for being one of the safest cars on the road. In fact, a Tesla Model S with 5 passengers recently got into an accident and flew 82 feet in the air. The Tesla was utterly destroyed but the car’s safety features managed to save the lives of everyone inside.

With its impressive blend of performance and safety features, CNBC relays that the Los Angeles Police Department has been exploring adding a few Model S cars to its fleet. Over the past year, the LAPD has been busy testing and evaluating two Model S P85D vehicles on loan from Tesla.

Tesla is working with the agency “to assess the vehicle’s performance in our environment and to learn what are the drawbacks and positives of this type of vehicle in our fleet operation. Not only on the regular transportation side, but also the future in the high-pursuit-rated vehicle arena.”

As it stands now, LAPD Police Administrator Vartan Yegiyan said the Model S is currently a tad too expensive to consider, but that may soon change over “the next three to five years” once EVs become more commonplace and prices inevitably drop.

As a point of interest, it’s worth noting that Tesla isn’t the only EV the LAPD is thinking about employing as CNBC adds that the department has also been busy evaluating the BMW i3 as well.