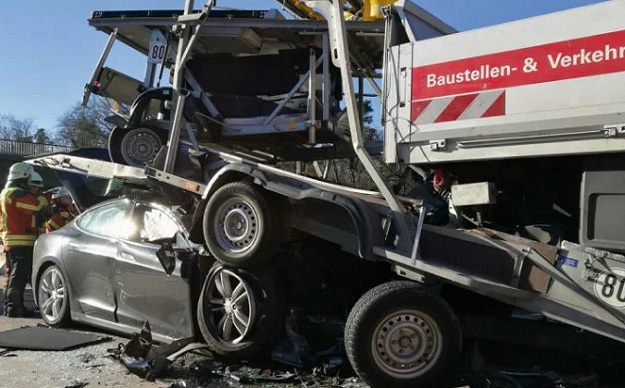 Despite the ongoing safety concerns that still plague Tesla’s Autopilot software, it’s easy to forget that the Tesla Model S and Model X are some of the safest vehicles on the road today. Indeed, when the first incarnation of the Model S was tested by the U.S. National Highway Traffic Safety Administration in 2013, it scored a 5-star safety rating across every single category. As a result, the Model S attained a level of safety certification that only 1% of all tested vehicles receive.

DON’T MISS: Apple will pay you zero money to trade in your Apple Watch

The Model S in particular is a 4,800 pound fortress of a car, expertly designed and engineered to absorb crushing collisions and protect the lives of its passengers. Just a few months ago, for example, we got wind of a Tesla Model S that got into an accident and flew 82 feet in the air before violently crashing back down to earth. The car was practically totaled, but all five passengers managed to escape the incident with non-life threatening injuries.

More recently, a Model S owner who got into an accident on Germany’s Autobahn survived after his car crashed into an 18-wheeler at a high speed. Originally reported by the German language site Badische Neueste Nachrichten (via Electrek), the driver reportedly suffered serious injuries but was well enough to walk away from the car without any help. If you take a look at the scene of the crash (pictured above), it’s truly remarkable that the driver was able to walk away to safety under his own volition.

The circumstances that led to the crash still remain somewhat murky, but there’s no evidence at this point that would suggest that Tesla’s Autopilot software played a role in this particular incident.

As a final point, the photo below is from the aforementioned crash that saw a Model S fly 82 feet through the air. The fact that anyone survived this is, once again, a testament to Tesla’s incredible engineering.