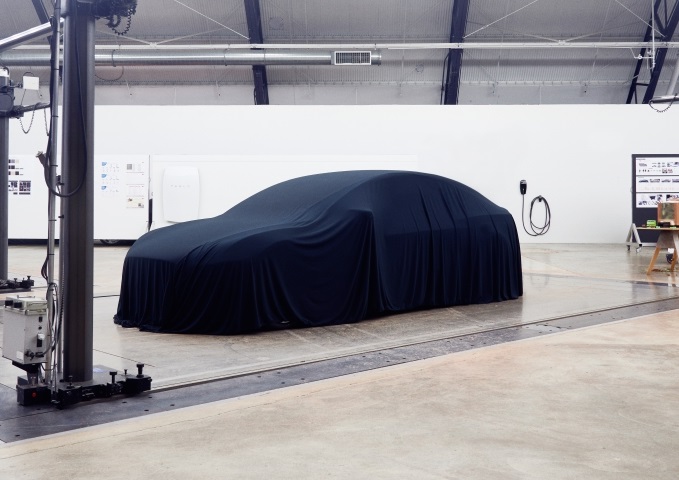 Tesla is set to unveil its game-changing Model 3 on Thursday night but a new picture shown in the German edition of Wired might give us our first look at the new car… although it’s not much of a look. As you can see in the image at the top of the page, Wired.de has published an image of a mysterious car that’s cloaked in a black cloth. The car’s silhouette bears a resemblance to the Model S, which means that it could be a refreshed version of that particular car. The more exciting possibility, of course, is that it’s actually a Tesla Model 3.

RELATED: The stakes could not be higher for Tesla this week

With the Model 3 announcement only a day away, Electrek’s Seth Weintraub has also published a new report that reveals some exciting new details about the car. First, the report claims the Model 3 will look like a hybrid of the Model S and the Model X while still maintaining a “sexy and sporty” look. Like other Tesla cars, it’s also going to get some pretty sick acceleration and will reportedly be able to go from 0 to 60 miles per hour in around 4 seconds. This isn’t quite on par with the acceleration of the Model S, which can go from 0 to 60 in just 2.8 seconds in Ludicrous Mode, but it’s still amazing for what will be a $35,000 car.

The most exciting revelation, however, might be about the car’s range. According to Weintraub, at least one version of the car will get up to 300 miles per charge driving at highway speeds, which would go a long way toward eliminating “range anxiety” among drivers.

The whole report is worth reading and can be found at this link.