T-Mobile has long said that it has the only network “built for unlimited.” That might be a bunch of marketing bluster — the jury is still out on which network is the “best” — but a new set of data from Strategy Analytics does show that network aside, T-Mobile’s customers do seem like the most likely to make the most of their data plan.

According to data gathered from 4,000 Android users’ phones, T-Mobile customers use the most data of any of the big four networks’ customers, both over cellular and on Wi-Fi.

According to the data, T-Mobile customers use an average of 5,261MB of data every month, or a little over 5GB. Sprint’s customers are the next closest with 4,350MB, while AT&T’s customers sip an average of 2,386MB monthly. T-Mobile has been aggressive about moving customers onto the T-Mobile ONE plan, which offers unlimited data up to a deprioritization threshold of 50GB. T-Mobile doesn’t offer non-unlimited plans on its postpaid accounts any more, and most promotions for new devices require customers to be on the ONE plan, which nudges existing customers towards the unlimited data rate plan. 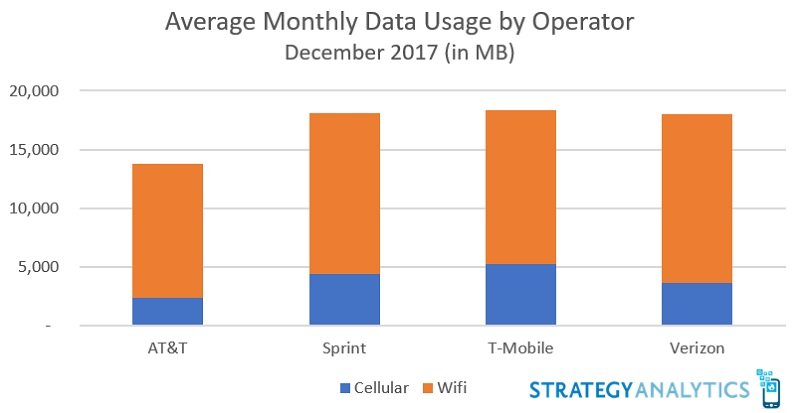 Verizon and AT&T, by comparison, offer unlimited plans alongside conventional data plans, which normally give customers around 3-5GB of data. That difference most likely explains the discrepancy between data usage on the different carriers, but it might not be the root cause. T-Mobile’s brand and plans are aimed firmly at a younger demographic, who are also the most likely to heavily use mobile data. Given that strategy, it’s no surprise that T-Mobile’s customers use the most data.

Bear in mind, however, that the study isn’t exactly comprehensive. Data was collected from a total of 4,000 Android users, who agreed to let Strategy Analytics monitor their data usage. That sample — Android users who are willing to download an app for a study — likely leans towards a younger, more tech-friendly user base, so it would be no surprise to learn that actual average data use is lower than what the study claims.