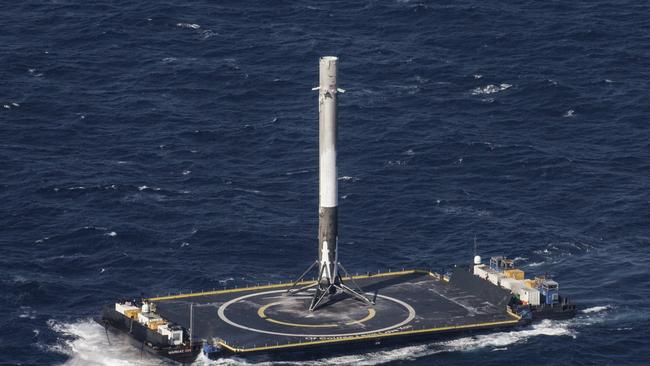 In the early hours of the morning while you were sound asleep, the SpaceX team was hard at work. Elon Musk’s private space exploration endeavor on Friday attempted its most daring feat yet: landing its reusable Falcon 9 rocket on a drone ship at sea after launching it into space to deploy a satellite and supplies to the International Space Station.

Those who were awake to watch the mission unfold were prepared for the worst — after all, we’ve seen Space X rockets destroyed time after time while attempting far less dangerous feats. But the stars were apparently aligned on May 6th, and the reusable rocket touched down successfully.

DON’T MISS: 300 free wallpapers that will breathe new life into your iPhone (or Android phone)

SpaceX’s reusable Falcon 9 rocket launched a JCSAT-14 communications satellite into space and delivered supplies to the ISS during a geostationary transfer orbit, which meant it was exposed to faster speeds and hotter re-entry temperatures than it had been on previous missions. In fact ahead of launch, even SpaceX was doubtful that the rocket would land successfully. But the landing was a complete success and the Falcon 9 will live to fly another day.

A video of the successful Falcon 9 landing follows below. You’ll also find a replay of SpaceX’s full webcast of the mission embedded beneath that.

Click here to watch if the video embedded above doesn’t work for you.