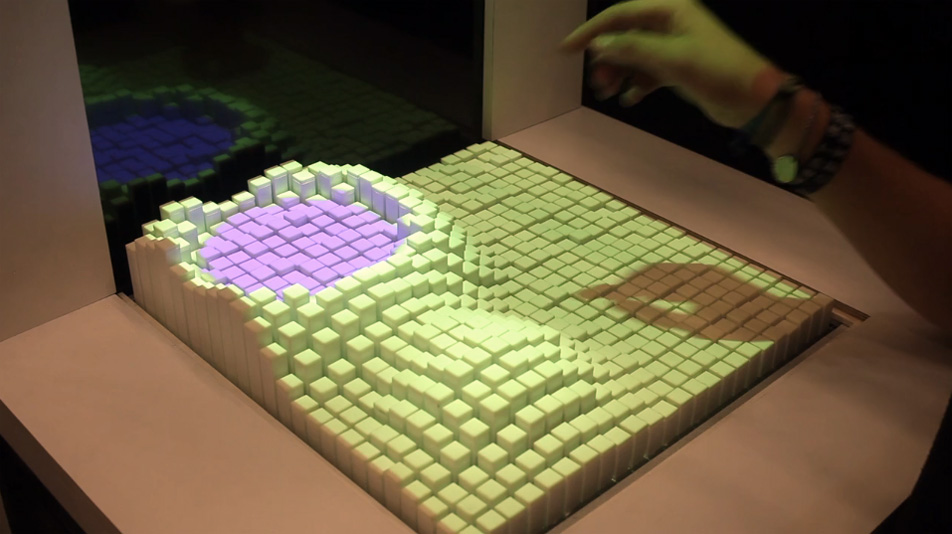 A group of researchers have created the groundwork for a new type of interface that could someday change the way we interact with devices.

Developed by engineers from the Massachusetts Institute of Technology’s Tangible Media Group, “Materiable” is an array of physical pixels mounted on motors that respond in very specific ways when manipulated. Using a computer to control the interface, it can be programmed with different algorithms in order to trigger responses that mimic different materials.

Coupled with a projector that can beam different colors onto the pixels, the possibilities are endless and exciting.

Materiable is the brainchild of seven engineers from MIT’s Media Lab: Ken Nakagaki, Luke Vink, Jared Counts, Daniel Windham, Daniel Leithinger, Sean Follmer and Hiroshi Ishii. Nakagaki and Vink are the leads on the project, which aims to give physical shapes to digital data.

Users can manipulate the interface with their hands or with motion gestures, and Materiable can be programmed to respond in a number of different ways using different physics algorithms. A video showcases the group’s prototype that was created as a proof of concept, and the most intriguing parts of the demo come when the Materiable interface responds like a liquid.

“Shape changing interfaces give physical shapes to digital data so that users can feel and manipulate data with their hands and bodies. However, physical objects in our daily life not only have shape but also various material properties,” the team said in a paper published this week. “We propose an interaction technique to represent material properties using shape changing interfaces. Specifically, by integrating the multi-modal sensation techniques of haptics, our approach builds a perceptive model for the properties of deformable materials in response to direct manipulation.”

The team’s proof-of-concept uses foam pixels mounted on motors that move up and down when manipulated by hand, or when controlled by a connected computer. The computer is programmed with several different algorithms that cause the pixels to respond to touch or motion gestures in different ways. Multicolored lights are also projected onto the device’s surface in order to render various patterns and objects on the pixel grid.

A video demonstration of Materiable in action follows below.