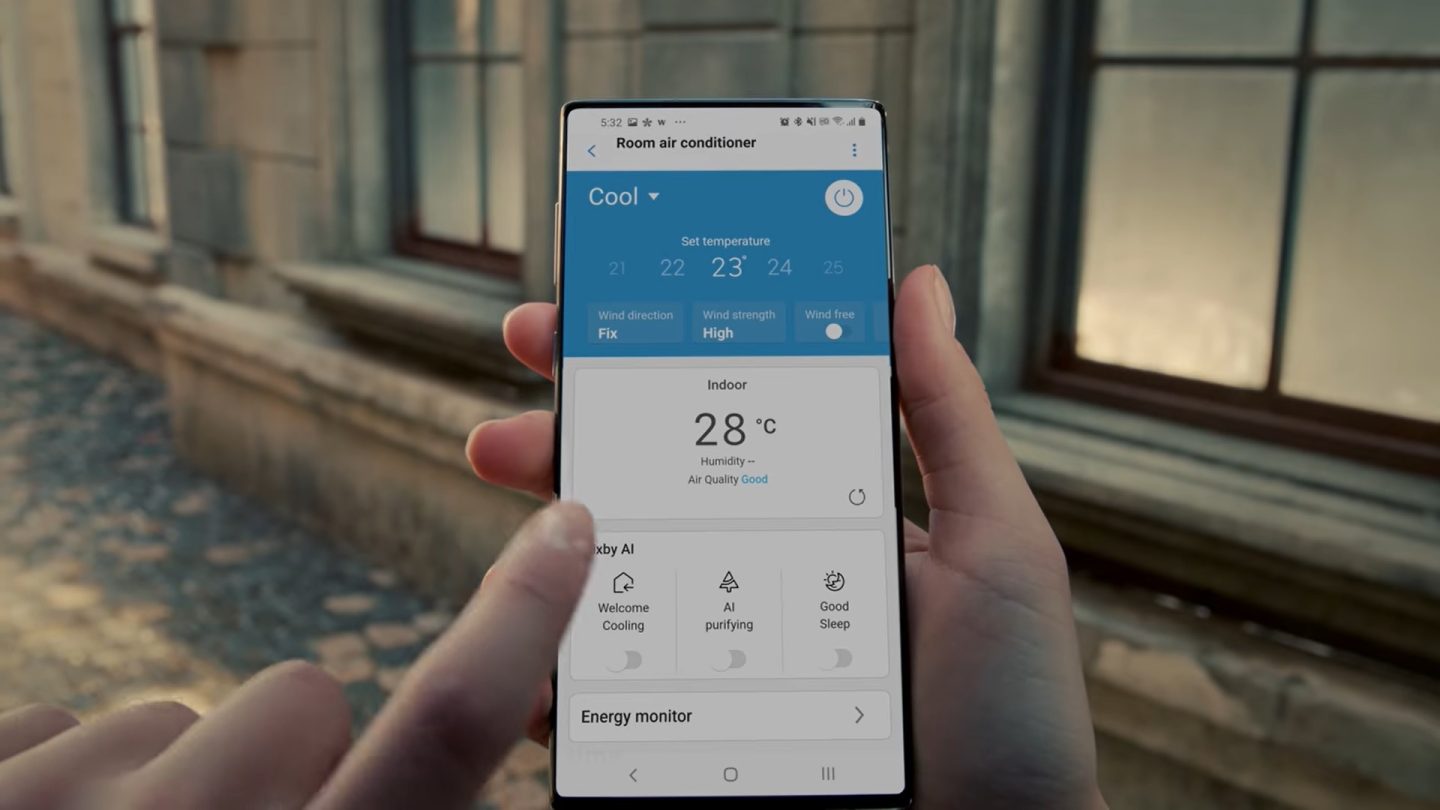 Providing Samsung sticks to the same release schedule for its flagship phone launches this year as it did in 2019, the Galaxy Note 20 should be officially confirmed in August. Of course, the new coronavirus pandemic may have an effect on that date, but based on multiple reports from other companies that were once concerned about their supply chains being disrupted, it seems like most notable 2020 hardware launches are still on track.

In fact, we might have gotten an early look at the Note 20 thanks to LetsGoDigital and YouTuber Concept Creator just days ago, as the two teamed up to put together renders that reflect what previous rumors and reports have suggested the phone might look like. As expected, it’s not much of a departure from the Galaxy S20, at least in terms of design, but Samsung might have leaked an even more exciting phone in an ad for an air conditioner, of all things.

In an ad for Samsung’s new Wind-Free Air Conditioner (no, we do not know what that means either), the company shows how the AC can be controlled via a mobile device through SmartThings. But rather than use a Galaxy S20 or Galaxy Note 10 to showcase this feature, we instead see an unfamiliar smartphone with no notch and no hole-punch cutout for the selfie camera. You can see for yourself starting at 0:55 in the video below:

There are multiple explanations for the appearance of this mystery phone. The first and most likely is that the device in the video is not a real device, but rather something that the design team cooked up for the purposes of this ad. Why Samsung wouldn’t just use one of its own phones is unclear, but maybe it just didn’t want a notch or a hole to interfere with showing off the user interface of the app. After all, it’s not an ad for a phone.

It’s also possible that we’ve been given an early glimpse at one of the new Galaxy Note 20 Ultra. None of the recent rumors have really suggested that Samsung will eliminate the notch altogether with the Note 20 line, but maybe we’re in for a surprise this year. Or were, anyway. And then there’s the chance that this is a real phone, but not one that has popped up in any leaks or rumors. Neither one of these seems especially likely, but who knows?

The one element of the mystery phone, real or not, that truly piqued my interest is what appears to be a small, pinhole camera in the top right corner of the display. It’s hard to see, but there’s definitely something there, and it seems like a pointless detail to include if this is just a mockup made solely for the purposes of an ad.

Whatever the case, if it is a real phone, it will undoubtedly leak in full just like every other Samsung phone.