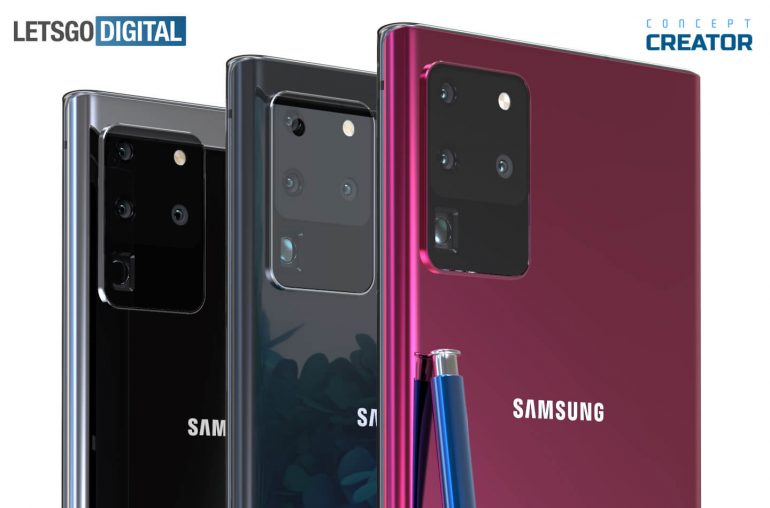 Because Samsung’s upcoming Galaxy Note 20 phablets will borrow a lot spec-wise from the new Galaxy S20 phones, noted leaker Ice Universe said on Twitter in recent days that we could almost think of the Note variant as the “Galaxy S20, Pen edition.”

That’s a bit tongue-in-cheek, but the fact remains: The Note 20 hardware specs won’t materially differ from those of the S20 series, Ice Universe added in a separate tweet, something that also holds true for the Note 20 cameras. Note enthusiasts, though, are a hardcore bunch and are no doubt plenty excited for the Note 20 series to arrive later this year (it’s being developed at Samsung under the code name “Project Canvas”) and it will include both a standard model and a Plus edition. And speaking of the latter, new renders have just surfaced courtesy of Dutch tech news blog LetsGoDigital (in partnership with designer Jermaine Smit, known online as Concept Creator).

The final design will most likely not mirror what you see here 100%, but it’s a good bet that it will look pretty close. The partnership here used existing leaks and specs that have trickled out about the upcoming handset, which the renders incorporate into a complete design.

One thing this new report notes is that the Galaxy Note 20+ devices are expected to be super-sized, with a 6.9-inch or even a 7-inch Super AMOLED display with a QHD+ screen as well as a 120 Hz refresh rate.

Samsung is expected to include a centered front-facing camera, as well as a rear camera setup similar to that of the S20 Ultra. That would mean a 108MP wide-angle camera, plus a 12MP ultra wide-angle camera as well as a 48MP telephoto camera with 10x Hybrid Zoom and 100x digital zoom (and, finally, a 3D DepthVision camera).

A larger battery would probably accompany these new features, and the S20 Ultra may provide some comparison. That phone sports a 5,000 mAh battery with a 45W fast charger — something Samsung might even be able to increase with the Note 20+. Regarding the memory, the Note 10 came with a minimum of 256GB of storage memory last year, while it’s likely that 128GB will be the minimum this year, which means you’ll probably be able to use a microSD card (something that was left out of the entry-level model last year, to the chagrin of loyal Note fans).

The price still isn’t clear yet, though it’s probably a good bet the Note 20+ will be more expensive than last year’s Note 10+ — and, moreover, we’ll probably be able to buy them starting around the end of August.