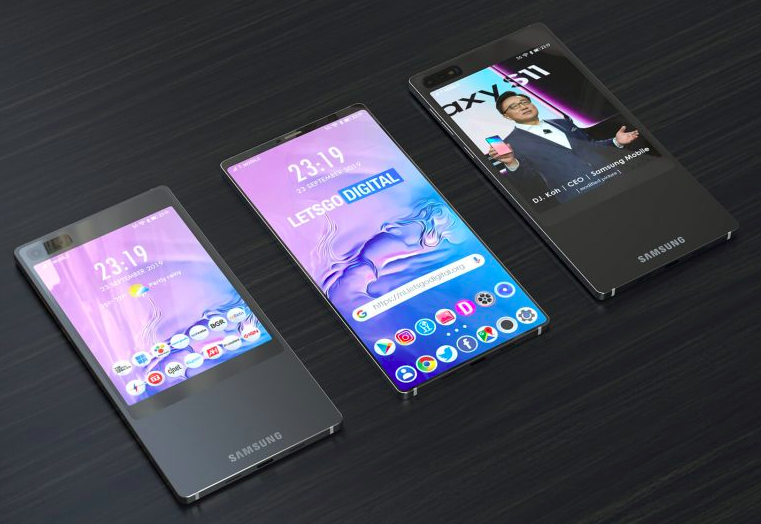 Ahead of an expected February or March launch for Samsung’s next flagship series that encompasses new Galaxy S11 models, some tantalizing details have started to trickle out about what fans of the latest Galaxy handsets could be in store for next. From a design perspective, we told you only a few days ago about a stylish slider design the company has come up with for possible inclusion in the S11 lineup — and now another tidbit about a possible new S11 design detail has emerged.

Based on a newly discovered patent, it seems Samsung is working on bringing a new dual-screen smartphone to fruition. One that would include the normal full-screen design on the front, while a smaller screen is placed on the back and useful for taking selfies. For a number of reasons, it’s believed this could show up in the S11 family — specifically, in the budget variant of the S11.

Dutch tech news site LetsGoDigital reported on this new patent, which was published on September 10 by the United States Patent and Trademark Office, with the outlet also preparing color renderings of the design such as the one you can see at the top of this post. Key details: The screen that’s shown on the rear of this proposed design covers about 60% of the surface and doesn’t extend all the way down, which would allow the user not to damage the back screen as easily or dirty it with fingerprints.

Additionally, the cameras are shown being housed above the smaller screen on the back.

The fact that a dual-camera setup is shown here, which corresponds to the dual-camera system enjoyed by the Galaxy S10 series’ entry model, the S10e, means it could be inferred that this design concept is meant for the budget version of the forthcoming S11. Per LetsGoDigital, another indicator this could be the case is the fact that users of the more expensive models such as those in corporate jobs won’t likely care all that much about a rear screen that facilitates taking selfies. Another interesting detail of this design: It doesn’t seem to include storage space to hold a stylus.

At the moment, Samsung is pressing ahead with the US launch on Friday of its troubled, delayed, super-expensive, and still seemingly super-fragile Galaxy Fold. Hopefully, though, we won’t have to wait too long to start hearing the first official word about the S11 lineup, which will probably be a highlight of Mobile World Congress in Barcelona at the end of February. Whether or not these new features like a slider design and a rear second screen show up in the actual models, it’s always interesting to see what Samsung comes up with for the finished product.