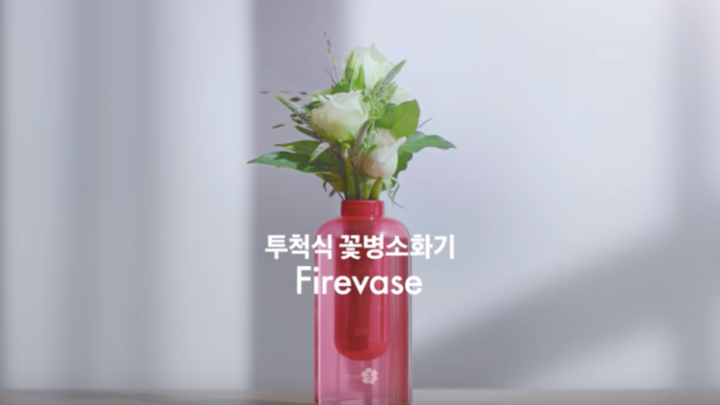 Even though it’s mandatory that you keep a fire extinguisher at home if you live in South Korea, around 40% of homes reportedly don’t own one — even though thousands of fires occur in the country every year. Which is why Samsung decided to come to the rescue with a new product. Or, rather, a company did that you probably didn’t know that Samsung owned.

Meet the Firevase. Produced by Samsung Fire & Marine Insurance, a subsidiary of Samsung, it holds beautiful flowers. And, if needed, you can also throw this bad boy at a fire to extinguish it, as demonstrated in the video above.

The insurance company gave away 100,000 of the vases as part of a marketing campaign promoting the use of fire extinguishers. The way the vase works — its structure includes a chemical that extinguishes fires. If you have one of these and a fire breaks out in your home, you’re meant to throw it directly into the fire. The vase will then explode and release expanding potassium carbonate, which will keep the fire from much-needed oxygen and kill the flames. You can see it in action in the video at the top of this page.

According to one report, in giving these out the Samsung-owned insurer prioritized homes in areas the government deems as especially fire-prone, like traditional villages.

Samsung actually won advertising industry plaudits around the promotional campaign for the vase, a campaign which was created by ad agency Cheil Worldwide. The video prepared by the agency ran in movie theaters as well as online, and the campaign won the top prize for design as part of the 2018 Korea Advertising Awards. According to Samsung Fire & Marine Insurance, this campaign also helped increase awareness for keeping a fire extinguisher at home, raising that awareness to 81%.