Samsung has copied Apple so many times over the past decade that it’s almost become something of a running joke. And even though Samsung’s most egregious behavior — which involved the company stealing all facets of the iPhone user experience — is long behind us, the company still can’t seem to stop following in Apple’s footsteps.

The most recent example involves a report out of Korea which claims that future Samsung devices may not ship with a charger in the box. And while everything is speculative at this point, ET News claims that Samsung might implement the change in early 2021. In other words, the follow-up to Samsung Galaxy S20 might ship with only the device and a USB cord in the box. Users interested in a charger would either have to supply their own or purchase one out of pocket.

According to the industry on the 8th, Samsung Electronics is considering a plan to remove the charger from the smartphone component with a partner. Details of the timing and method have not been confirmed, but Samsung is expected to exclude the charger from some models to be released next year.

A number of industry officials said, “Samsung Electronics is discussing how to remove the charger from smartphone components with related companies.”

Samsung’s justification is that the company has been shipping chargers with new phones for more than 10 years, which is to say that most people looking for a new Samsung device likely already have an existing charger they can use. And of course, the ultimate benefit to Samsung would be a cheaper cost of production per unit sold, which can certainly add up when dealing with tens of millions in unit sales.

What’s interesting about the timing, though, is that it comes hot on the heels of a report indicating that Apple’s forthcoming iPhone 12 will not include a charger or wired headphones in the box. Rather, the iPhone 12 will reportedly only come with a charging cable. While early rumors of Apple’s plans to kick the charger to the curb were met with some skepticism, we’ve seen some corroborating reports emerge over the past few weeks. All that said, there’s a good chance that next-gen smartphones from both Apple and Samsung will no longer ship with accessories that we’ve perhaps come to take for granted.

Now you might justifiably raise the point that Samsung looking to cut costs isn’t exactly “copying” Apple. Still, it’s not as if we need to look terribly hard to find recent instances of Samsung engaging in more overt copying. Just a few months ago, for example, a Samsung presentation at CES basically stole Apple’s Face ID icon: 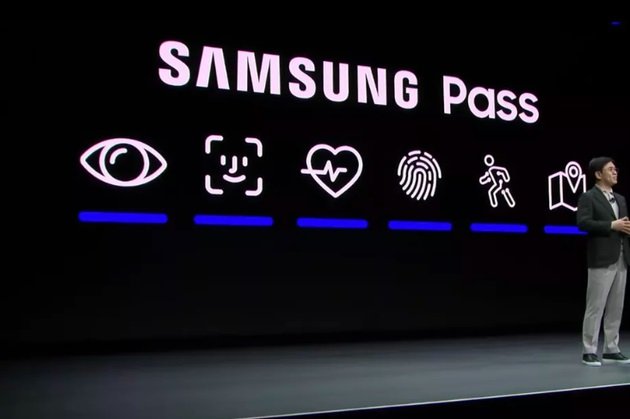 And for good measure, here’s what it looks like on the iPhone: