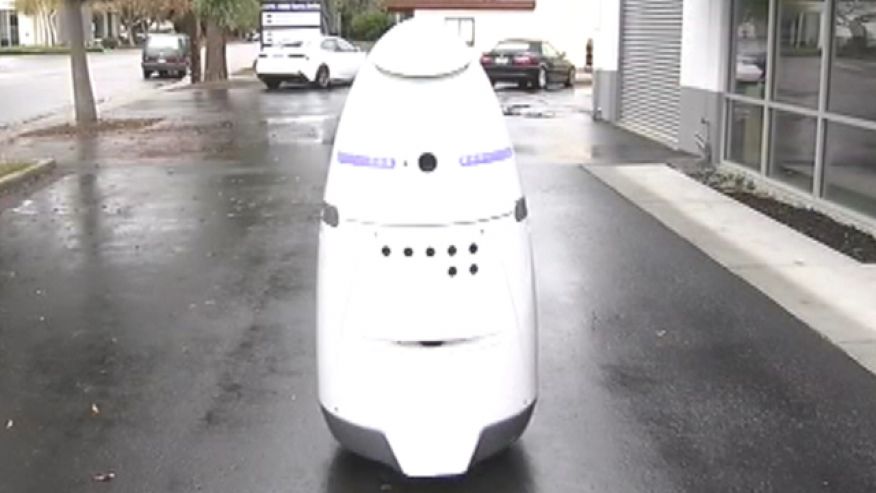 Hate your job? Craving a vacation? Turns out you’re in some surprising company.

On Monday, a robot that was ‘hired’ to patrol a Washington, DC office building made quite the splash when it rolled into a fountain and took a dip.

In doing so, the robot, a Knightscope K5, ended its life, according to the Verge. The Knightscope K5 is used by the security industry to patrol locations that see foot traffic, such as malls and office parks. It stands about five feet tall and weighs roughly 300 lbs. Its rocket-like shape and lack of arms make it difficult for the robot to get up after it topples over, according to the Verge.

Despite these shortcomings, the Knightscope K5 is said to be packed with sophisticated technology. The BBC reported that the robot incorporates high-tech features, including face-recognition software, high definition video capture and infrared and ultrasonic sensors.

Our D.C. office building got a security robot. It drowned itself.

We were promised flying cars, instead we got suicidal robots. pic.twitter.com/rGLTAWZMjn

In the aftermath of its plunge, onlookers took to social media to share the robot’s demise with cyberspace.

“Our D.C. office building got a security robot. It drowned itself. We were promised flying cars, instead we got suicidal robots,” tweeted spectator Bilal Farooqui.

Another onlooker, Peter W. Singer, mused in a tweet “Steps are our best defense against the Robopocalypse (Security robot down at Georgetown harbor)”

Meanwhile, Knightscope blamed the sweltering July temps and added a dash of humor to the story, letting the robot speak for itself. “I heard humans can take a dip in the water in this heat, but robots cannot. I am sorry,” said K5 in an ‘official statement’ statement tweeted by Knightscope.

BREAKING NEWS: "I heard humans can take a dip in the water in this heat, but robots cannot. I am sorry," said K5 in an official statement. pic.twitter.com/nWC4tubv9w

K5 has made headlines in the past for its involvement in bizarre incidents. This past spring, a man was busted after he attacked the robot in an attempt to “test” it.