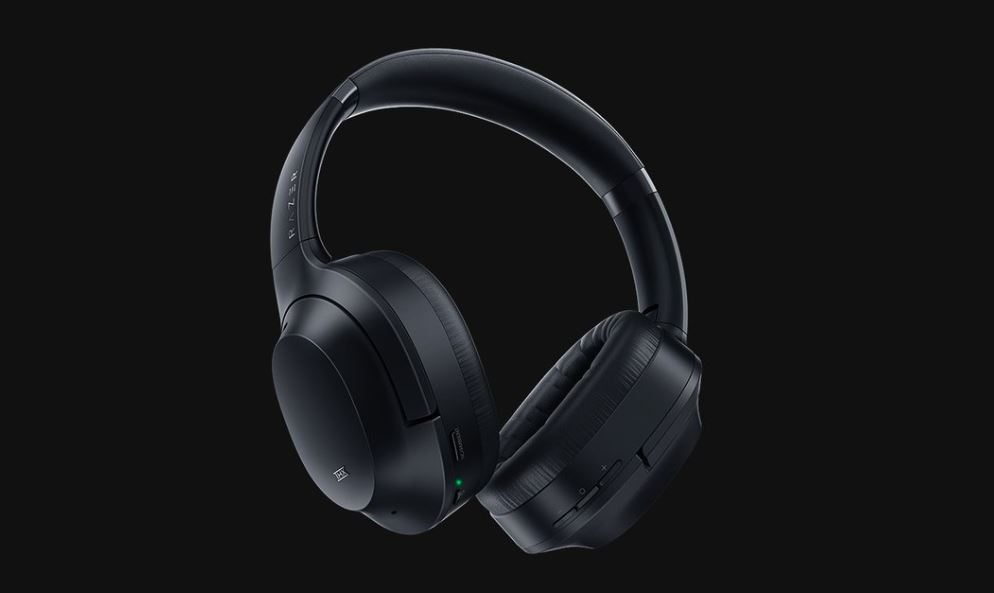 Razer’s recently-released Opus headphones are everything a pair of high-end headphones should be. They’re comfortable, sleek, and packed with noise-canceling tech and are THX certified. I’ve had the opportunity to test them out extensively and overall I’m incredibly impressed, and not just with the headphones themselves, but with Razer’s very obvious shift toward a more lifestyle-oriented philosophy when it comes to its high-end gear.

First, let’s tackle the Opus headphones. For the price of $199.99 you’ll get the Opus headphones in either black or midnight blue, a carrying case, 3.5mm headphone cable for wired listening, a (shockingly short) charging cable, and a USB adapter that converts a USB type A port to a type C port (for charging). It’s a pretty standard bag of goodies and that’s what you should expect when you’re laying down a couple of big bills for audio accessories.

The headset’s design isn’t groundbreaking, but it’s also well-executed. The materials feel high-quality and while I wouldn’t go so far as to drop test them from any considerable height, I believe they’d survive daily wear-and-tear without issue.

You might notice that there’s no neon green logo to be found on the Opus, and the company has instead decided to go with simple (and, in my opinion, much more appealing) RAZER branding on the band. The THX logo makes an appearance on the outside of the headphone cups, which is a nice touch.

The cups are very comfortable, with memory foam cushions and the band rests against your head with a padded cushion covered in faux leather. They’re comfortable, and like any closed-back headphones there’s the possibility that your ears will get a bit sweaty if you’re wearing them on a walk, but that’s a risk that comes with the territory.

The active noise-canceling feature is quite powerful, although there’s only one level of ANC, so it’s either on or off. After testing it in a variety of settings I feel confident in saying that these headphones would stand toe-to-toe with some of the big dogs (Bose, Audio Technica, etc) when it comes to quieting your surroundings so you can hear what you want to hear. Sitting next to my whirring computer with traffic bustling by my open windows is a pleasant experience once I activate the noise-canceling toggle. It’s also great at hushing the sound of air conditioners and even the repeated yips of my neighbor’s dog (it’s a sore subject, let’s not get into it).

There are a couple of nice quality-of-life features packed into these cans as well. Lowing the headset to your neck pauses the audio automatically, and if you hold down on the noise-canceling/ambient audio button you get a stream of external audio allowing you to respond to brief interruptions without taking the headphones off.

The headphone can be used wired or wireless, and the quality is the same either way. I’m happy that Razer threw in a nice long 3.5 mm cable because I find myself switching from one mode to the other quite frequently. As for the charging cable, I’m a bit disappointed. It works fine, of course, but it’s super short. I mean seriously, it’s 30 cm long, which is less than one foot. I suppose most people have longer USB-C cords hanging around already, but I was surprised by the tiny one in the box.

On the topic of battery life, I’ve got some very good news. Razer’s stated claim that the headphones can last up to 25 hours on a single charge even with active noise canceling enabled appears to be spot-on. In fact, I accidentally left my headphones on after work one day and arrived in my home office the next morning to find that they were still very much alive and carried me through another workday with no issue.

In terms of sound quality, I found the Opus to be perfectly adequate for just about anything I threw at it. Noise-canceling headphones have to wrestle with a number of things in order to deliver solid sound, and bass is often something you have to sacrifice. The same is true here, and while the audio — whether it’s music, movie dialogue, or a YouTube video — sounds good, the bass is definitely lacking a bit.

You can change the audio settings a bit by installing the Opus app on your smartphone and toying around with the different preset modes, but even the bass boost mode wasn’t particularly booming. I opted to leave it on the THX setting (which is great, by the way) for the majority of my testing.

Overall, for $199.99, it’s easy to place the Opus headphones in the same category as others that cost $50 to $100 more. That’s refreshing, especially coming from Razer, which has a (well earned) reputation for producing high-quality products with equally high price tags.

That brings me to the larger picture of where Razer is headed. It’s clear that the company is still all-in on gaming gear — just look at their product lineup if you need proof of that — but Razer is obviously trying to branch out into more lifestyle-oriented products as well.

The Opus headphones are a nice example of that. There’s no big green logo, no rainbow LEDs, and no flashy naming scheme. It’s just a high-quality product with subtle style touches at a reasonable price. The same can be said of Razer’s forays into broadcasting gear and even its smartphone accessories. It’s a pleasant surprise for someone who has followed Razer’s rise from “For Gamers, By Gamers” to something more like “By Gamers, For Everyone.”