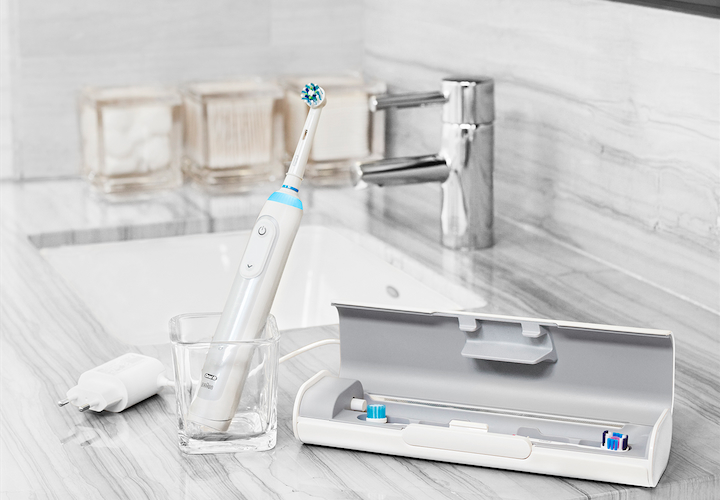 This year’s Mobile World Congress was rich in announcements, especially for top mobile hardware from some of the most important players in the market. But the one new product I want to buy right now isn’t a smartphone, and it’s not a tablet. What caught my attention was Oral-B’s Genius toothbrush, an iPhone-connected toothbrush that’s supposed to correct or improve your brushing style.

The smart toothbrush connects via Bluetooth with your iPhone or Android smartphone, and I got to test one at Oral-B’s booth in Barcelona. Overall, the experience is on par with what you expect from an electrical toothbrush. But it’s Oral-B’s hardware and software tricks that set it apart from everything else, including previous models that are currently selling in stores.

Sensors embedded in the Oral-B Genius brushes coupled with the official Oral-B app will tell you whether you’re brushing the minimum two minutes recommended by dentists all over the world, whether you cover all areas of your mouth, and whether you’re applying too much pressure.

The app uses the camera to capture the movements of your hand, which means you have to attach the iPhone or Android device to the mirror – thankfully, that’s done using a holder that’s similar to any GPS holder you may have in the car.

Oral-B’s research says that up to 80% of people spend insufficient time brushing in at least one zone in their mouth, and 60% don’t brush the back molars. The new brush will track whether you dedicate enough time to all areas of your mouth and will provide detailed statistics on your progress.

Furthermore, the brush detects when you’re applying too much pressure on your gums, and even slows down its motors in case you ignore the visual warning.

A timer is also there to make sure you spend the minimal two-minute requirement on brushing.

Finally, there’s a gamification system in place that offers you various rewards for successfully improving your brushing techniques.

The Oral-B is available in black and white and can be preordered on Amazon Spain with prices starting at €225 for the 8000 series and at €280 for the 9000 series. It’s not the cheapest brush you could consider. But in addition to the brush, you also get a special traveller’s case that lets you hold the phone while you’re away from home and simultaneously charge your phone. Speaking of battery life, the Li-Ion battery is good for two weeks of brushing on a charge.

The app is available as a free download from the App Store or Google Play but needs an update to include all the new features. Before you ask, the app alone can’t be used with any other ordinary toothbrush to improve your brushing style. It’s not just the camera of the phone that’s delivering the smart features — the Genius toothbrush has sensors that capture your movements and determine whether you’re using too much force on the teeth and gums.

During my two-minute test with the toothbrush, I chose to go for the Challenge Mode, which didn’t give me any hints about any spots that I may have missed while brushing. Although I thought I knew how to brush, I ended up scoring 71%, which means there’s room for improvement. It seems that the Oral-B Genius can certainly help users improve brushing habits, keep track of their performances, and ultimately improve oral hygiene.

The brush is available for preorder on Amazon Spain right now but will hit stores only at some point in July.