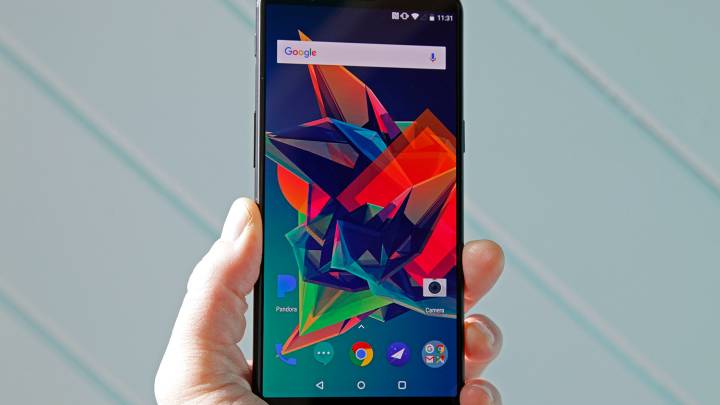 However, that doesn’t mean Face Unlock is as secure as Face ID. The technology doesn’t use a 3D sensor to scan the user’s face, and OnePlus doesn’t let you authorize payments via Apple Pay and can’t be used to unlock certain apps, like mobile banking.

We already told you Face Unlock is incredibly fast. OnePlus further explained the technology on its website, in a forum forum post that addresses Face Unlock concerns.

The company says the purpose of Face Unlock is convenience and ease of access. The feature is meant to make phone unlocking just as fast as back when the fingerprint sensor was located on the front of the phone — it now resides on the back to make room for extra screen real estate.

So how does it Face Unlock work? Well, it makes sure it’s you by looking at “over 100 identifiers on your face such as the distance between your eyes or between your nose and upper lip.” The feature works in different lighting conditions and when you’re wearing glasses.

Furthermore, the tech makes sure you’re “alive,” looking to minimize the chances of someone using a photo to hack your phone. The company says there are multiple checks carried out, including “analyzing the 3D aspect of the subject.” it’s unclear how this is done given that the phone doesn’t have the same types of sensors as the iPhone X.

Apple’s Face ID uses a sophisticated TrueDepth camera that projects 30,000 infrared dots on a user’s face, which is how depth is used. This is the 3D aspect of Face ID, and it explains why Face ID is slower than Face Unlock, as the iPhone X has to both conduct readings and validate your identity. Face ID is slightly slower than Touch ID, but in real life use, interaction via Face ID with the phone is actually faster.

OnePlus seems to be very aware that some people may try to hack the OnePlus 5T using nothing but selfie images, and plans to improve its security in the future.

In an upcoming update, the phone will understand whether the subject is emitting light (a phone) versus reflecting (your actual face) by analyzing shadows and bright areas. Other current checks related to this particular scenario is to look for screen reflections, the presence of a square element (shape of the phone) and more.

This is just one of the updates coming to the phone in the future, but OnePlus would not share more details in the blog post so that people can’t hack Face Unlock. That statement alone implies that Face Unlock can indeed be hacked as it right now.

To reduce the chance of someone hacking your OnePlus 5T, OnePlus built a failsafe mechanism into Face Unlock. The feature is deactivated after five failed attempts, and a passcode is required to unlock the phone. On top of that, users can require the OS to ask for fingerprint or password authentication when certain apps are opened, even if the device has already been unlocked with someone’s face.

That said, videos showing OnePlus 5T Face Unlock hacks have yet to emerge. Comparatively, Samsung’s own face recognition feature was hacked with pictures rather fast.