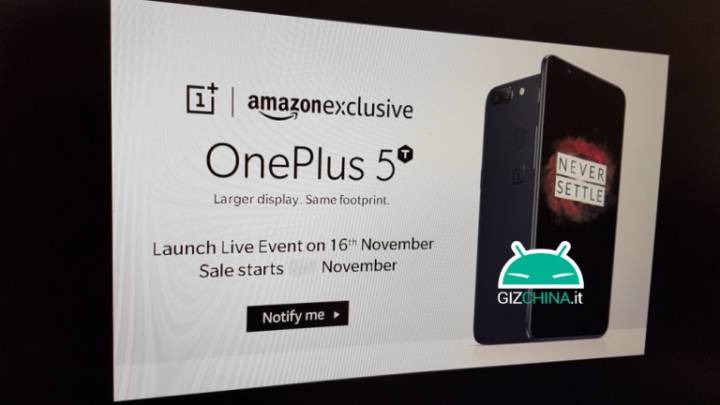 One of the most intriguing (and confusing) phones will be revealed in less than a month, if a new leak turns out to be correct. On Thursday, GizChina shared a screenshot of what appears to be promotional material for the OnePlus 5T — a follow-up to the OnePlus 5 with similar specs and size, but a much larger, bezel-less display.

According to the promo, OnePlus will hold a live launch event for the phone on November 16th, though the date that sales actually begin has seemingly been blurred out. The photo also suggests that the OnePlus 5T will be an Amazon exclusive, so if you want an all-screen OnePlus phone, you might have to get it from Amazon.

Previous OnePlus 5T leaks have indicated that the phone will feature many of the same specs of the original OnePlus 5, including the Snapdragon 835 chipset, Adreno 540 GPU, 8GB of RAM, 128GB of storage, 20-megapixel camera on the front and the rear and all running on Android 8.0 Oreo at launch. We’re somewhat skeptical about the camera and the operating system, but for the most part, you should expect a OnePlus 5 with a bigger screen.

Speaking of the screen, AnTuTu benchmarks indicate that the OnePlus 5T will be equipped with a 6-inch AMOLED display with an 18:9 ratio and 2160 x 1080 resolution. Obviously, none of this has been confirmed yet as OnePlus has yet to even announce the existence of the phone, but if this latest leak is legitimate, we should know a whole lot more about the OnePlus 5T in just a few weeks at the launch event.