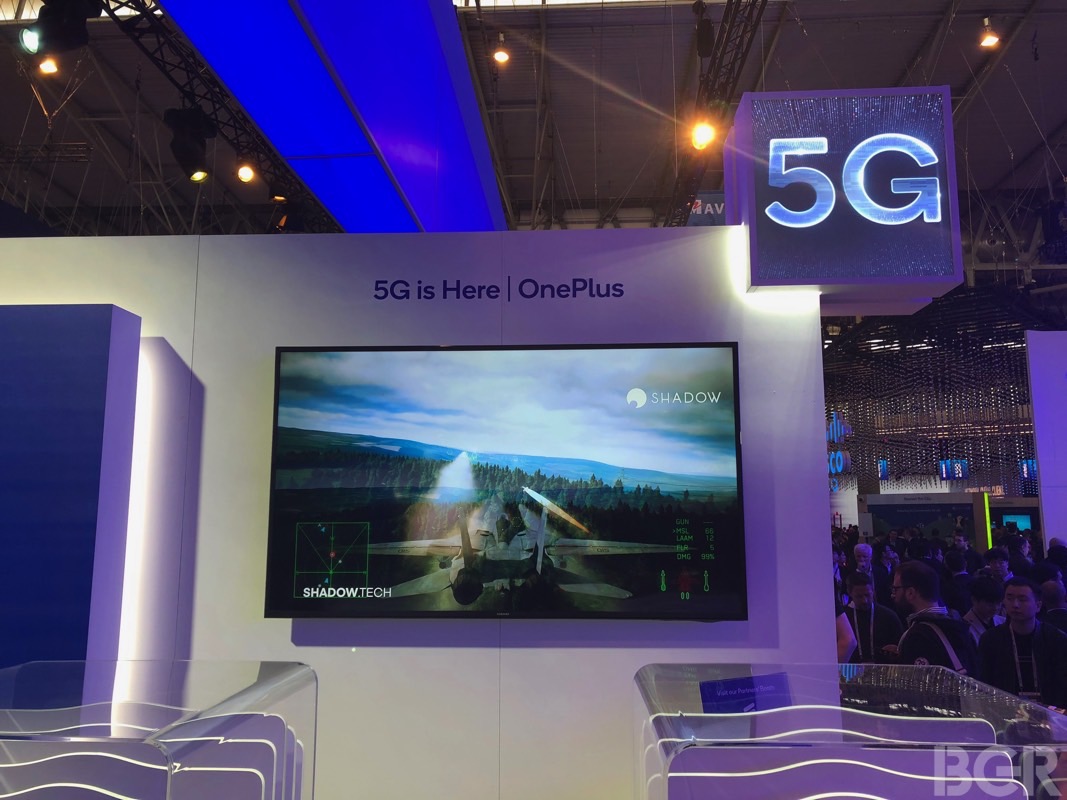 It’s finally here, smartphone fans. 5G is no longer just a buzzword that everyone likes to throw around at events like Mobile World Congress and talk about how great the future will be. However, carriers are just starting to deploy their networks, so you might not find coverage just yet — assuming you even have access to a 5G phone.

Also, the OnePlus 5G, a phone the Chinese company confirmed many moons ago, is finally here. However, it’s only a prototype device that’s being shown at MWC at Qualcomm’s booth to demo one of the major things that 5G will make possible soon: Incredibly fast cloud gaming.

Before you ask, I was pretty bad at playing whatever jet fighter game the phone was streaming from the cloud. I did manage to fire a couple of rockets and rounds at absolutely nobody before nose-diving, and the resulting explosion was beautiful. I could not be prouder of myself. It looked a lot like this, but on a much bigger screen:

The best thing about the whole experience was that the game ran smoothly without any glitches on a big-screen TV connected to the OnePlus 5G phone via HDMI. The phone, packing Qualcomm’s Snapdragon 855 processor and the 5G modem that comes with it, streamed the game from the cloud without a hitch, and it did so over and over. With every plane crash, the game would just resume playback.

A wireless controller was all I needed to fly that plane into the ground. If this isn’t the future of computing — streaming a game from the cloud over 5G to a tiny device that fits in your pocket, but has the ability to beam everything to a large TV — then I don’t know what is.   I can’t tell you at what speeds the game was streaming, the frame rates, or anything about the game. All I know is that it ran smoothly, and it didn’t look bad either. My photos won’t do it any justice. We do know that Ericsson made the 5G network that’s running over at Qualcomm’s booth. The Chinese smartphone maker, meanwhile, explained in a press release what was going on during the demo:

At Qualcomm Technologies’ booth, OnePlus simulated a futuristic setting of 5G cloud gaming where players would only need a smartphone and a gamepad. Through the powerful capabilities of cloud processing as well as the throughput and responsiveness of 5G, players can play large sized games online that are generally only playable after downloading onto the PC first. Utilizing Snapdragon elite gaming features and optimizations, players were able to experience high definition and low latency cloud gaming like never before.

The OnePlus 5G phone, meanwhile, was placed in a hideous protective case that hides its full design. We have no idea if there’s a notch, or how big the phone really is. All we know it looked like this on display.

In fact, there were two OnePlus 5G devices on display at the show, OnePlus explained, with the second one displaying live messages left by OnePlus community members on the “Say Hello to 5G” page. Admittedly, you don’t need 5G to do that, but it’s still a neat trick.