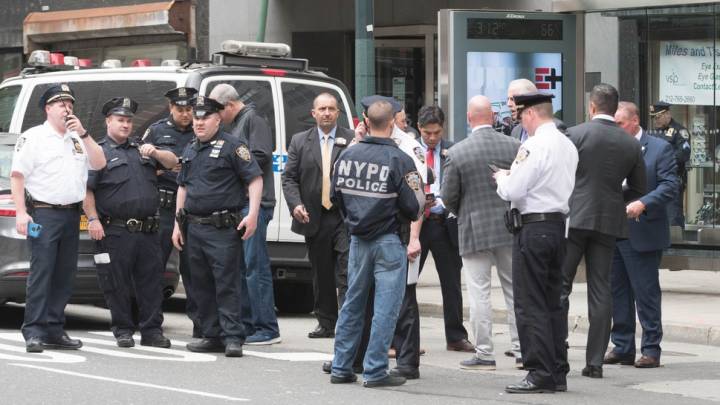 According to New York City Police Commissioner James O’Neill, none of the revelers in the Big Apple Monday night who are there to party and celebrate the arrival of 2019 will be more than 10 feet away at any time from either a uniformed or undercover police officer. It’s part of the intense security cordon the city’s law enforcement annually puts in place, given the estimated 2 million people who will pack the area on New Year’s Eve. But in addition to cops who will be on hand to keep everyone safe, O’Neill added during a press briefing that — no surprise — there will also be plenty of security measures you don’t see and may not take any notice of.

Like the fact that the NYPD, for the first time, will be using drone technology on New Year’s Eve to keep an eye on the party crowd and ensure everyone’s safety. Additionally, law enforcement officials will likewise be employing “counter-drone” technology.

“We haven’t done that before,” O’Neill said during his press briefing, “but that’s going to give us a visual aid and a flexibility of being able to move a camera to a certain spot with great rapidity through a tremendous crowd.”

According to news reports, these measures will complement other NYPD security tools that range from helicopters to bomb-sniffing police dogs and blocker vehicles. The use of drones, though, is of course an especially novel element of the security plan, which includes at least one drone equipped with a camera that will patrol the sky above Times Square.

O’Neill added during the press conference that one of the drones will be tethered to the top of a building as a deterrent to attacks on the crowd below.

Meanwhile, according to The New York Post, here’s a rundown by the numbers of some of the NYPD’s other security measures ahead of the Times Square festivities: Some 1,225 security cameras will be monitoring the crowd, and 235 vehicles will serve as protective blockers covering the partiers in Times Square. More than 50 canine teams will be on hand, and more than 200 cement blocks will also be set up in addition to metal posts.

The sight of the ball dropping on New Year’s Eve is certainly a feel-good, old-fashioned tradition. But don’t be surprised, NYPD officials have been pointing out in recent days, if you’re there for the bash and also see something flying quietly through the sky when you crane your neck as midnight approaches.