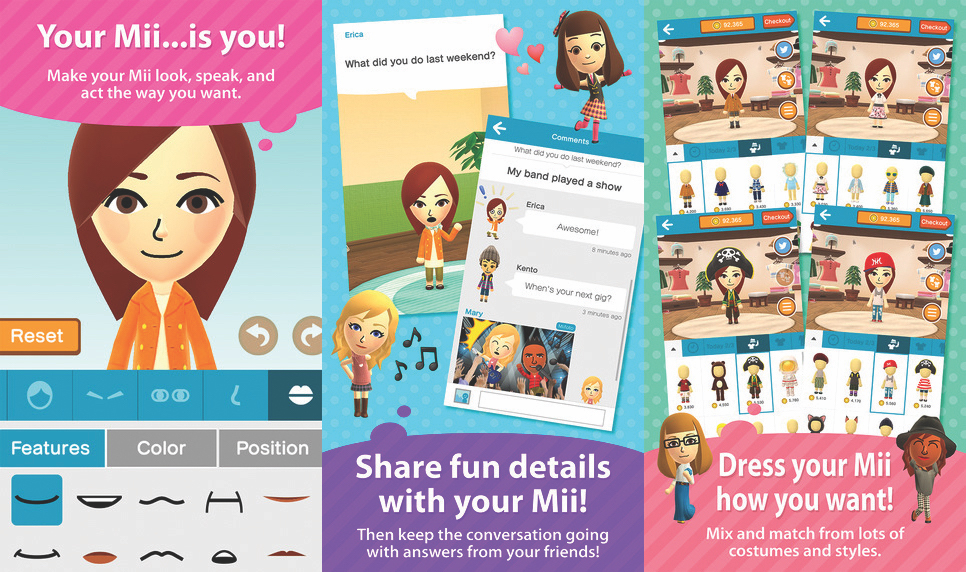 Everyone who said Nintendo would never make a smartphone app has finally been proven wrong. This week, Nintendo launched Miitomo — a social app for iOS and Android — in Japan. With Miitomo, users are able to create their own personalized Mii avatars and then connect with friends from Facebook and Twitter by answering questions, commenting on statuses and sharing pictures of their avatars.

READ MORE: Sony responds to Microsoft’s invitation for cross-network play between PS4 and Xbox One

Speaking with The Wall Street Journal, Nintendo of America President Reggie Fils-Amie said that he believes the company has “created a number of elements that are very sticky for the consumer.” Although Miitomo isn’t likely to replace any of the already established social networks, it could be an additional distraction for Nintendo fans.

So now that the app is out in the wild, what do critics think about it?

We combed through several hands-on pieces published within the last 24 hours and found some interesting reactions to the app, starting with one from The Verge:

“Miitomo is a little clunky at times, with too many load screens and the odd graphical glitch. But what Miitomo does have in abundance is the sleek, appealing quirkiness that Nintendo’s had a knack for ever since titles like Wii Fit and Brain Age. I wouldn’t bet on it becoming the next big thing, but it’s going to be a neat way for Nintendo fans to engage with the company and each other — and it might just be another notable source of revenue, too.”

I haven’t played with the app myself yet, but I’m still tempted to agree with this assessment. Nintendo likely doesn’t expect the fans of its popular game franchises to be overly enthused about a silly social app, but as Tomodachi Life has already proven, there is a market for the company’s distinct brand of quirk.

Here’s another reaction from 9to5Mac:

“Miitomo isn’t the flagship smartphone game that many have been clamoring for, but it’s an interesting first attempt from Nintendo. The actual gameplay may leave something to be desired, but it without question has Nintendo’s fingerprints all over it. Ultimately, the success you have with Miitomo will be determined by how many friends you can acquire and how many questions you and your friends are willing to answer.”

That last part is what really stood out to me. This might sound obvious, but a social app isn’t going to be much fun to interact with if you don’t have friends on the app who are willing to socialize with you.

“We had our reservations before walking into our extended hands-on session with Miitomo. This is after all Nintendo’s first foray into the crowded smart device arena, but we found it to be an utterly engaging and entertaining app which naturally embodies the values of Nintendo. Once you have a few friends on your list there is a seemingly never ending barrage of amusing factoids to read, comment on and prompts to share more about yourself.”

I’m not saying that I expected an especially impartial reaction from a site called Nintendo Life, but there’s no doubt in my mind that fans of the company (who aren’t still irritated about the fact that this isn’t the “game” they were expecting) will find a whole lot to love about Miitomo.

Miitomo is expected to launch in the United States and other territories before the end of March, but if you can’t wait any longer, Nintendo Life also has a great guide for downloading the app on iOS or Android at this link.