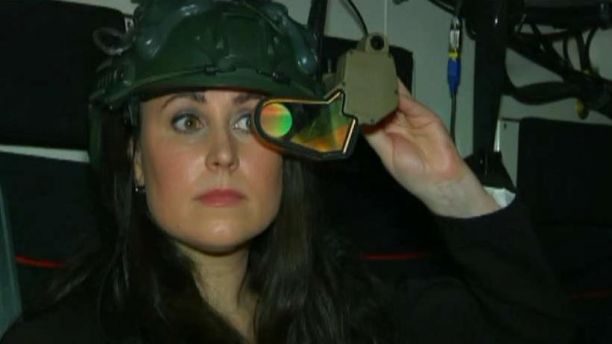 What if tank crews could see through the heavily armored walls of their vehicle?

BAE System’s cutting-edge tech, called BattleView 360, lets warfighters do just that. A crew member wearing the helmet-mounted tech can “see through” the tank out to the battlefield around them.

Technology innovation has long been underway to give fighter pilots this sort of capability. For example, the F-35 helmet utilizes cameras and sensors fixed around the outside of the jet to provide pilots with a 360-degree view. In a sense, the helmet lets fighter pilots see through the floor of the aircraft, down to the ground.

Related: The ‘Sea Wasp’ will be a potent threat to terrorists and their underwater bombs

The concept with the tank is the same – but on the ground. With BattleView 360, tank crews and commanders will have a complete view of the battlespace around them in real time – no matter how heavily armored the vehicle is.

The heart of BattleView is a digital mapping system. It collates, tracks and displays the position of anything of interest to a tank crew in the surrounding area. And it can do this in two-dimensions, or in three.

Aside from being very futuristic and cool, BattleView 360 provides a number of key advantages. One example is removing an enemy’s element of surprise.

Since seeing outside the vehicle can be tough, egress can be a particularly dangerous moment. Enemies could be lurking outside for an ambush, but unseen to the crew members before they dismount.

By wearing a BattleView enhanced helmet, crews gain 360-degree situational awareness. Warning messages—  like that an enemy is approaching— as well as critical mission updates are relayed directly to the helmet.

BattleView is also designed to give crews the advantage of quickly engaging more targets and more rapidly confirming to shoot.

For the tank driver, the tech give him “external eyes.” The driver can also choose to overlay the external 360-vision with other useful data like terrain input and other symbols to aid navigation.

There are two ways warfighters can interface with BattleView 360– through headgear and a rugged tablet. Crew can use either a special high-tech lens that mounts on their helmets, or a touchscreen display.

Both sync to cameras and sensors mounted outside the vehicle. It is this syncing that provides the real time ability for crews to “see through” the heavily armored walls. The sensors collect the data used to build a 360-degrees view of their surroundings.

For the headgear, a translucent lens sits in front of one eye, kind of like Google Glass. Data is projected onto it, and the warfighter can “see through” the tank with that eye.

He also gains enhanced vision. The cameras can feed both visual and infrared light – giving the warfighter the option to see in either way.

Warfighters equipped with BattleView can then further enhance their view of the battlespace with overlaid information and symbology. Information and visuals can also be provided beyond the sensors on the tank itself.

BattleView 360 harvests data from sensors and cameras on the tank or other armored vehicle, but it also can let the warfighter see through a range of “eyes,” and overlay data immediately from other sources. For example, dismounted warfighters can use BattleView to send information back to the vehicle. Tank crews can receive data and even opt to see through the eyes of a drone, other armored vehicles, or ground robots.

What extra things can teams see?

In addition to displaying the positions of friendly forces, BattleView can do lots of other helpful things. It can be used to do tank route planning, progress monitoring, but it can also do critical calculations, like determine the best route to avoid enemy detection.

There is a red ground display that demarcates the ground that hostile forces can see – making it clear what route not to take. The technology can flag areas of uncertainty from last hostile sighting, and figure out the most likely routes an enemy would take.

The tablet style display provides certain advantages to a commander.

BattleView overlays crucial data that help commanders gain a full picture of the battlefield. For example, the system gathers, collates and displays data on friendly and enemy forces to help a commander rapidly identify and distinguish them. He can use the gathered data and enhanced “vision” to figure out safer routes.

Related: This huge combat tractor is the ultimate multitasker

In addition to aiding in quick, well-informed decisions, the BattleView tech also lets a commander communicate crucial data, like plans, directly to other tanks, vehicles, dismounted forces, and HQ.

The enhanced 360-picture of the battlefield can also help with targeting decisions. Tank commanders can even view a gunner’s, or any other crew member’s, display on his screen at any given time.

BattleView 360 can be integrated into both existing and new vehicles, and can be introduced to give warfighters this ultra-enhanced vision and situational awareness capability in future fights.