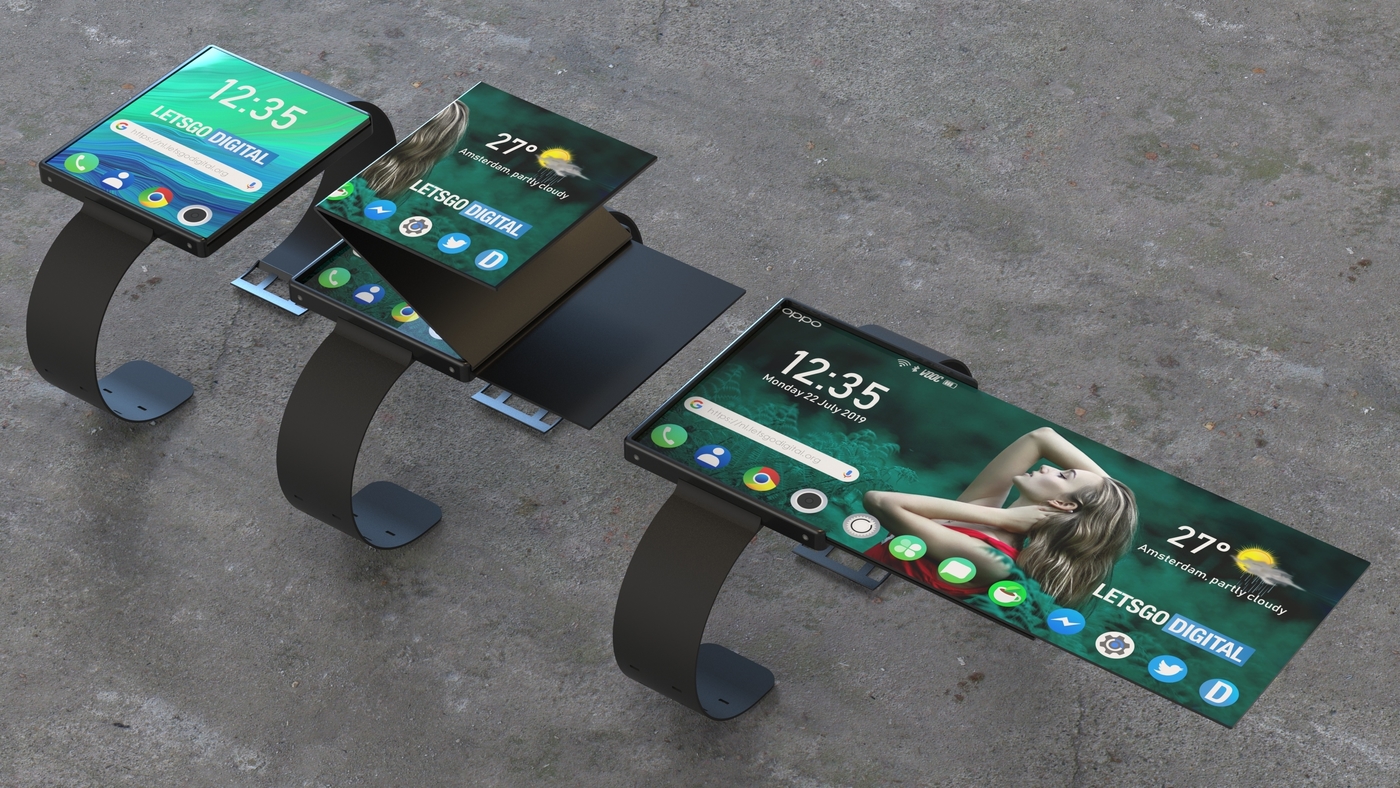 Smartwatch designs from companies that aren’t Apple or Samsung are starting to get pretty trippy these days, with new concepts emerging that seem to have more of a science fiction provenance than a desire to simply combine the functionality of a timepiece with a connected display. We’re talking about smartwatch concepts like the one inherent in a newly published design patent from Oppo, which envisions the users strapping a small display to their wrist that unfolds and expands into a ridiculously long display that expands the screen up to 200%.

If the color rendering of Oppo’s idea you see above (prepared by LetsGoDigital) looks familiar, that’s because it’s not that dissimilar from a similar design of IBM’s we reported on earlier this month. IBM’s purported to be a multi-function smartwatch concept involving a watch display that unfolded to become a phone and again to become an even larger tablet (all while remaining attached to your wrist).

As presented in the patent documentation obtained by LetsGoDigital, the screen expands in width while the height stays the same. As you can see noted in the diagram below, the “unfolded display” would extend down the length of the arm you’re wearing the watch on, leaving you free to operate it with your other hand.

When the watch is “folded” and back to its smallest state, the extra display is stored in the watch case under the main screen. There’s a recessed groove which the screen slides out from, and the design concept here envisions a pressure mechanism that lets you press to unfold the screen which also prevents the screen from accidentally unfolding itself.

Is there a chance we’ll see a product like this from Oppo anytime soon? No, probably not, would be our guess. Samsung has had a hard enough time successfully producing a phone with a display that bends just once, and you don’t have to be an industrial designer to immediately spot all sorts of challenges inherent in perfecting a gadget like this futuristic-looking smartwatch.

That said, a smartwatch of some kind is certainly a possibility for Oppo, which already released the Oppo O-Band activity tracker a few years ago. Rumors of a smartwatch in development followed not long after that. It’s actually not that surprising, to a degree, to see brands like Oppo thinking along these lines given that some of the biggest names in the industry like Samsung and Huawei obviously see a future in foldable displays. Whether consumers will warm up to something like the watch as envisioned here, to say nothing of the matter about whether it even has an ounce of practicality in it — that’s, of course, another thing entirely.