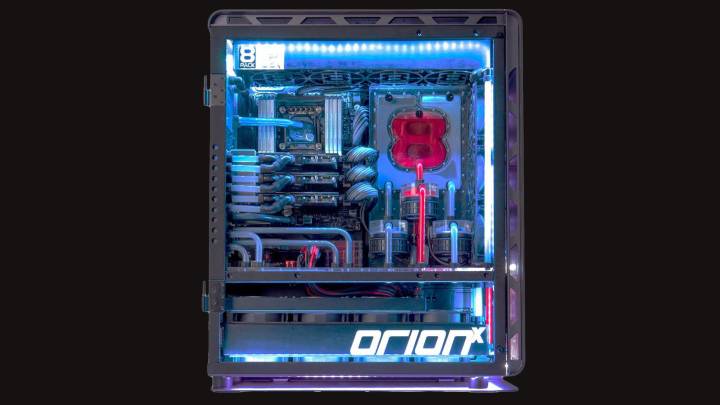 The build, demoed at the Computex trade show in Taiwan, is the mad product of UK-based firm Overclockers UK and its in-house extreme builder 8Pack. This is the computing equivalent of an AMG-tuned Mercedes, and it shows. The system is actually two complete PCs. Up top, there’s a system running Intel’s $1,700 10-core processor, three GTX 980 Ti graphics cards, and 64GB of memory. Oh, and did I mention the 4TB of solid-state drive space?

In case that system is busy churning through video processing or breaking into the Pentagon, there’s a second, more reasonable PC built into the case. It ‘only’ uses a Core i7-6700K overlocked to 4.8GHz with 16GB of RAM, and should be suitable for light web browsing while you’re waiting for the nuclear launch sequence to decode.

Really, the impressive thing about this build isn’t the long list of expensive components — anyone can buy pricey computer parts. Building a case that accommodates them all, and then cooling all that stuff is the neat part. To do that, the builders have three completely separate color-coded liquid cooling loops. The first one deals with the overclocked i7 in the small PC, the second handles those three graphics cards, and the final system deals with the 10-core processor and all the solid state drives. Those water coolers are vented to the air via radiators with the surface area of a small aircraft carrier.

Needless to say, no one — not even a supervillain hacker from a Bond movie — needs a computer this overkill. But if you do (and provided you have $20,000 to spend), you know who to call.