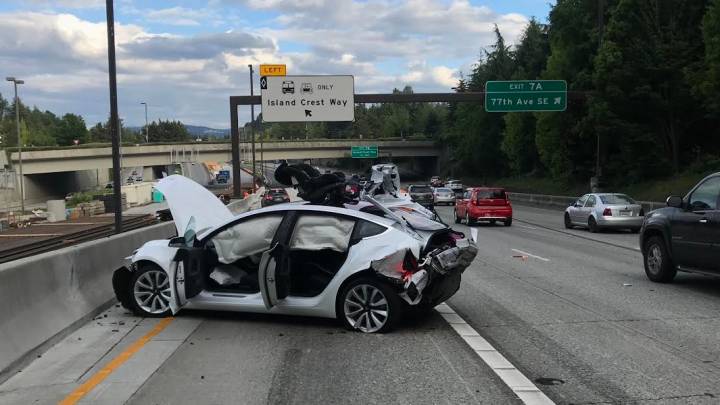 Despite all of the controversy surrounding Tesla’s Autopilot feature, there’s no denying that Tesla’s fleet of vehicles have been engineered to be some of the safest vehicles on the road. For quite a few years now, Tesla vehicles have routinely garnered innumerable safety accolades. The Model S, as a prime example, received a 5-star safety rating in every tested category used by the National Highway Traffic Safety Traffic Administration, good enough to put it in the top 1% for safety across all tested cars.

The Model 3 may not have all of the bells and whistles of the Model S, but the car certainly boasts the same safety-oriented design and safety features. To this point, a family traveling in a Model 3 was recently involved in a high-speed accident on a Washington highway and managed to emerge unscathed. According to the report — which first appeared on the Tesla Motors Club forum — a car going in excess of 65 MPH slammed into the back of a Model 3, prompting the Tesla driver to lose control before ultimately crashing into a freeway divider.

Was cruising along the i-90 tunnel in Seattle, WA on mercer island with my wife and 2 kids, when I hear some vehicles approach at high speed from behind. Then suddenly I hear a screeching sound from a car breaking hard, and then a car slams into my rear end – hard. I was going 65, so that vehicle must have been going significantly faster. From there I lose control of the car, and the car spins out of control, hitting the freeway divider wall all the way on the other side of the freeway 4 lanes across, and then bouncing back all the way back to the other side of the freeway and hitting that wall before coming to a stop.

Thankfully the model 3 performed miraculously, crumple zones compressed, airbags deployed, no fire after the accident, and no one in my family seems to be seriously injured.

Subsequent reports have indicated that the collision was the result of a street race gone awry. Regardless of the cause, and in light of all the negative press that tends to shroud Tesla due to high-profile accidents involving the company’s Autopilot feature, it’s important to remember that Tesla vehicles are, without question, engineered to be some of the safest cars on the road today.

Indeed, we’ve seen a number of stories over the past few years involving Tesla passengers surviving what could just as easily have been fatal accidents. In one widely-publicized example, 5 passengers inside of a Model S survived an accident that saw the car fly 82 feet in the air before crashing into the ground at a high speed.