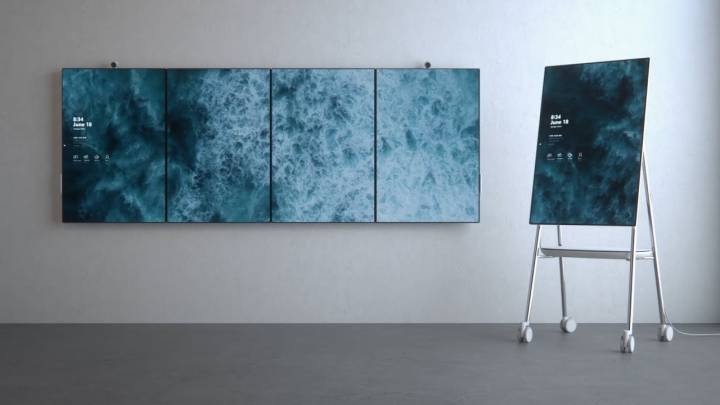 Three years ago, Microsoft announced the first-generation Surface Hub, a giant touchscreen designed to make collaboration brainstorms marginally less soul-sucking. The device has been a quiet success in the business world, with Microsoft selling devices to over 5,000 companies in 25 countries, including more than half the Fortune 100.

Today, the company is launching the Surface Hub 2, an updated version with fancier software, a better base resolution, and a lack of bezels that make this look like the coolest TV you could possibly mount to any wall, whether it’s in a conference room or not.

The biggest changes appear to come in the screen hardware and the mounting option. The Surface Hub 2 comes in a single 50.5-inch screen size with a 3:2 aspect ratio, the same as what you get on any of the Surface PC devices. That aspect ratio is much taller than what you find on a TV or most projectors, which makes it appear more natural when you use the Surface Hub’s rotating wall mount to pivot it to portrait mode.

Oh yeah: the Surface Hub 2 appears to have a rotating wall mount that lets you switch between the two different orientations at will. That might seem like a gimmick at first glance, but it makes sense given Microsoft’s bigger vision. The Surface Hub will largely be showing content from PCs and smartphones, and people are flipping between orientations on those devices is becoming more and more common.

Sadly, pricing and availability information still isn’t being released. Microsoft said it will be priced “competitively,” and Google’s Jamboard, which is the only real competition, costs around $5,000. Some companies will be able to try the Surface Hub 2 this year, but it won’t be more widely available until next year.