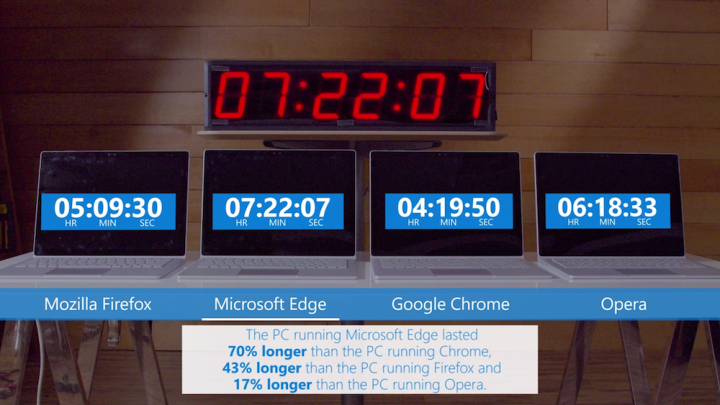 It wasn’t long ago that we were celebrating the release of Opera’s power saving mode, but on Monday, Microsoft decided to prove to everyone that its own proprietary browser might be the best in the market for your battery.

“We designed Microsoft Edge from the ground up to prioritize power efficiency and deliver more battery life, without any special battery saving mode or changes to the default settings,” says Weber. “Our testing and data show that you can simply browse longer with Microsoft Edge than with Chrome, Firefox, or Opera on Windows 10 devices.”

Performing three separate tests, Microsoft compared Edge with the other three leading internet browsers: Chrome, Firefox and Opera. The first was power consumption in a controlled environment; the second was real-world energy telemetry from millions of active Windows 10 devices; and the third was time-lapse videos of all four browsers performing the same tasks at once.

Microsoft Edge won every time, as you can see in the following video:

That not enough for you? Microsoft also says that the Windows 10 Anniversary Update (scheduled to roll out later this summer) will include “even more power-saving improvements, using fewer CPU cycles, consuming less memory, and minimizing the impact of background activity and peripheral content like Flash advertisements,” letting you browse even longer with Edge.

You can read more about the future of Microsoft’s replacement for Internet Explorer in another post by Brandon Heenan over on the Edge Dev Blog.