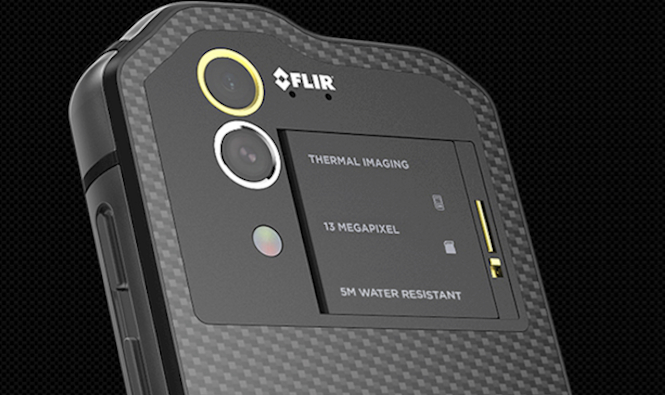 Probably not many people need thermal cameras on their smartphones, but those who do will soon be able to buy such a device. It might not be the hottest iPhone or Android handset in town, but Caterpillar’s Cat S60 is the first smartphone in the world to pack a thermal camera.

The company announced the handset a few days ahead of this year’s Mobile World Congress, where it’ll be available for demos.

Being a Caterpillar creation, the Cat S60 also happens to be a rugged device, with the company calling it the “most waterproof smartphone.”

The thermal camera is certainly a feature that stands out immediately. Caterpillar explains the camera comes from FLIR, and allows users to use their devices to monitor events that involve heat. These include work-related chores like detecting heat loss around windows and doors, spotting moisture and missing insulation, or identifying over-heating electrical appliances and circuitry. But it can also be used for getting around in complete darkness.

The camera picks up thermal information from up to 50 to 100 feet, and can see through smoke.

Other camera features aside from the dedicated FLIR thermal cam include a 13-megapixel main camera with dual flash, 5-megapixel front-facing camera.

The phone is waterproof for up to 5 meters for one hour, and can withstand drops onto concrete from 1.8 meters. The handset has a strengthened die-cast frame, and features MIL Spec 810G specification.

The handset will be available this year priced at $599. The full press release follows below.

READING, UK, February 18, 2016 – Cat® phones today announced the launch of its new flagship product, the Cat S60; the world’s first smartphone with an integrated thermal camera, and the world’s most waterproof smartphone. The device will be unveiled at Mobile World Congress 2016, in Barcelona.

The Cat S60 includes an embedded thermal camera from FLIR, the global leader in thermal imaging technology, allowing Cat phone users to be the first in the world to use their smartphones for a multitude of use cases, including: detecting heat loss around windows and doors; spotting moisture and missing insulation; identifying over-heating electrical appliances and circuitry; and seeing in complete darkness.

The thermal camera visualizes heat that is invisible to the naked eye, highlighting temperature contrasts. It can pick up heat and measure surface temperatures from a distance of up to 50 to 100 feet, and see through obscurants such as smoke, enabling a huge range of use cases for building professionals, utility workers, outdoor sports enthusiasts, and emergency first responders to name but a few.

The Cat S60 is also waterproof to depths of up to 5 meters for one hour, allowing it to be used as an underwater camera, pushing the boundaries of mobile technology, and how and where it’s used.

“To stand out from the crowd in today’s smartphone market requires true innovation and we are proud to partner with FLIR to announce what is truly a world’s first,” said Peter Stephens, CEO Bullitt Group, global mobile device licensee for Caterpillar. “The Cat S60 represents a milestone for smartphones. We are excited for thermal technology to be in the hands of Cat phones customers and to discover the myriad of daily time and efficiency use cases it will present for them.”
“We are delighted to work on the latest Cat phone with Bullitt Group, to integrate our thermal camera into their proven, industrialized smartphone to create a truly innovative and groundbreaking mobile product,” said Andy Teich, President and CEO of FLIR. “The CAT S60 presents mobile users around the world with new capabilities – a ‘sixth sense’ experience that only thermal imaging can offer.”
The Cat S60 is also an extremely tough and robust, world class rugged smartphone. It exceeds military spec, is built to withstand drops onto concrete from up to 1.8 meters, and it’s dustproof as well as waterproof. Its versatile, super-bright display can be viewed in bright sunlight, and the touchscreen can be controlled with wet fingers or while wearing gloves. It is also protected by the latest Corning® Gorilla® Glass 4.